In Canada’s first wave of the pandemic, 82 per cent of deaths took place in long-term care facilities. That’s 3,436 residents and six staff members dead, according to the National Institute of Aging.

Canada’s had the highest percentage of COVID deaths in long-term care among wealthy countries.

“I think of this as a national humanitarian crisis, to let all these vulnerable people get infected,” said Megan Davies, a professor and historian of health at York University. The idea of a “good” death is valued across cultures, she said, and many COVID patients in care homes had that “violated.”

Davies isn’t waiting for the pandemic to end to start collecting the history and putting names to the numbers.

Her new multimedia exhibit, COVID in the House of Old, features intimate audio stories of residents, their families and workers in long-term care facilities in B.C. and Ontario.

It was a heavy undertaking, with Davies calling it “the Kleenex project.”

Doing a history project while history is unfolding has its challenges. The multimedia exhibit, which was supposed to launch at the Arbutus Gallery of Kwantlen Polytechnic University’s Surrey campus Thursday, has been postponed due to the province’s spike in COVID cases.

And stories from the Wikwemikong Nursing Home, on Wiikwemkoong unceded territory in northern Ontario, are yet to be collected due to an outbreak there.

So in true pandemic fashion, the exhibit can be viewed virtually and will be launched by Davies in a Zoom webinar Friday (details here).

The exhibit pairs people’s stories with chairs, decorated with artifacts created and collected by their loved ones.

There are stories of families struggling to communicate in the midst of restrictions on visits to long-term care homes.

“How we saw my dad was through an iPhone,” said a daughter whose father had dementia. “The screen was so small. My dad didn’t see very well. He didn’t hear very well. I don’t think he really understood.”

Her father was a resident of the Lynn Valley Care Centre in North Vancouver, home to Canada’s first outbreak in long-term care. He died from COVID-19 that April.

Another man, Jacobus, decided to leave his care home in Ontario at age 93. He had enough of the chaperoned visits with his children during COVID, which were behind a pane of glass.

“Dad had this incredible yearning in his voice, and he said, ‘I would do anything to spend an afternoon in your garden,’” said his daughter. “It was heartbreaking. I said, ‘If you are that unhappy and you’re willing to get on a plane, you can come live with me.’”

In Squamish, a residential school survivor named Karen spent weeks in her room during the pandemic.

“They wouldn’t tell us if they had a case of COVID,” she said. “We just had hearsay. Every time that we had a scare, boom, there goes the door, locked back in again. I think that’s why I had that anxiety attack. Remembering being isolated in the residential school and being isolated in here. Because I’ve never really talked about it to anybody, to help me go through that.... Most of the time, I end up in tears.

“It was so hard… in that year, I lost my uncle, he lived in here, and I lost my aunt, she lived in here too. And nobody’s allowed to come in to see them, but I went down there to tell her goodbye. Both of them.

“After [what] I think was a year, my son was allowed in, the only one allowed. He wouldn’t even go see his friends. He would say, ‘I’m not allowed. If I do, I won’t be able to see my mum.’ I just remember seeing him coming in in the door, and I thought, oh, I think I was on another planet. I thought he was going to break my neck, hug me so tight. Well, we weren’t supposed to hug, but we did.”

Karen’s story shows the urgency of recording these experiences. She died unexpectedly, though not from COVID, in November.

The exhibit includes a family’s story from Little Mountain Place care home in Vancouver. In the 116-bed facility, 99 residents and 70 workers tested positive for COVID. Forty-one residents ended up dying.

“My family was not even notified about the outbreak,” said Bernadette Cheung, who read about it online. Her grandmother lived at the facility. “That lack of urgency was really appalling to us… I’ve never seen so little communication in a situation where there was so much that was actually going on. They weren’t answering their phones.”

Her grandmother also lost the Cantonese-speaking social worker she relied on at the facility, with no answers why. She eventually caught COVID and died in December 2020.

Almost a year later the Vancouver Coastal Health authority would seize the assets and operations of Little Mountain, vaguely citing “issues that exist,” such as “insufficient access to support services.” The COVID-19 deaths that occurred there were not mentioned in a news release.

There have been many similar stories of problems at care homes during the pandemic: poor infection control, delayed responses to outbreaks, a lack of transparency, staff shortages and abandonment and inhumane conditions for residents, such as being left without basic care, hygiene, food and water.

One especially damning report was produced by the Canadian Armed Forces after members were deployed to Ontario care homes in May 2020. They found expired medication, cockroaches, patients left in soiled diapers and aggressive staff.

Strict lockdown restrictions also hurt residents. In November 2020, B.C.’s seniors advocate reported on how they harmed residents’ moods, emotional states and cognitive function. The use of antipsychotic and antidepressant medication went up during the pandemic.

Scholars and health professionals, including Davies, have drawn attention to the funding and administration of care homes. Canada has a mix of public, non-profit and private homes. Public homes are considered to offer better care, measured by higher staffing levels and fewer transfers to emergency departments. Forty-six per cent of long-term care homes in Canada are public.

“I don’t think you should be able to commodify care, especially care of vulnerable people,” said Davies.

Davies is about to launch a petition calling for a commission of inquiry into exactly how care homes became so deadly in Canada. 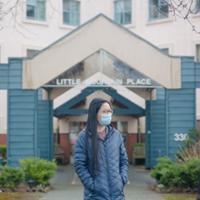 “There are people who are mourning,” she said. “People who through that long isolation in care facilities watched other people die, or were locked up in a room for weeks at a time.”

Other solutions she’s pushing for include increasing time staff spend with residents, raising long-term care staff pay and creating care plans for residents developed in consultation with families, caregivers and residents themselves.

The exhibition will be accompanied with a coming podcast, and Davies is working on teaching materials. An elegy was also written for the exhibition, running three hours, each musical note representing one of Canada’s care home deaths.

It was designed as a travelling exhibition, and Davies hopes that visitors will connect with the personal stories of grief and frustration, care and love.

“Canadians really shouldn’t forget about this,” said Davies. “This is such a huge issue of injustice that happened right on our doorstep.”

Visit 'COVID in the House of Old' here. Health historian and York University professor Megan Davies will be launching the project via Zoom webinar, with special guests, on Friday at 1 p.m. PST. You can register to attend for free on Eventbrite.