Having reaped the film world’s highest reward (hello Oscar!) and been seen by millions of folks around the globe, let’s take a moment to consider the octopus at the centre of the documentary phenomena My Octopus Teacher.

Yes, it’s a charming, emotional, beautifully shot film, blah blah blah. The story, in short, concerns a middle-aged South African man who takes to the ocean in order to rediscover himself, and in the process strikes up an unusual relationship with a wild octopus.

But I have to wonder what the film would’ve been like if told from the cephalopod’s point of view. It might be crankier, more along the lines of, “What does this big dumb human want now?” or “For Christ’s sake, why does he keep coming around every day, getting in my eight-armed business?”

How many of these feelings skew towards the more dyspeptic side — petty annoyance, irritation, boredom, or that sinking sensation that they’re being used, yet again, to help some dude through his midlife crisis? For any female creature having to perform emotional labour for a male, the answer is all of them.

Without access to verbal language, the best an octopus can do is turn 10 shades of purple to express her exhaustion with humans.

Animals as a conduit for people’s emotional breakthroughs is so oft employed as a narrative device, it could be its own sub-genre. Almost every creature on the planet has been put to this use. Horses, pigs, sharks, bears, dogs, the list goes on. Train a wild mustang, get emotionally freed. Befriend a whale, learn compassion. Adopt a shelter kitten, have your curtains shredded.

Narrative film is guilty of leaning heavily on this device, but documentary is perhaps even more prone to talking over creatures. Everyone from Walt Disney to David Attenborough has imposed human drama overtop of animal experience to derive meaning.

But if we really listened, what would we learn from the wild kingdom? Most often, it’s to be direct. If you are hungry, eat. If you are tired, sleep. If you are angry, tear someone’s head off. Sometimes the lesson is even simpler — if you have nothing useful to say, please shut up.

The scourge of humans talking is just that. Upon reading the newspapers every morning or watching the news, my first thought is: please, no more yakking. This doesn’t mean that communication doesn’t happen in the animal world — anyone who’s been awoken by the dawn chorus knows that creatures get loud in the morning, but at least it isn’t endless verbiage.

Although it didn’t receive nearly the same level of attention as My Octopus Teacher, another documentary about animal life offered a less-human centric approach. Gunda, championed by Joaquin Phoenix, everyone’s favourite vegan curmudgeon, eschewed nattering humans for the non-talking ways of the barnyard.

Gunda is the story of a large sow and her squirmy, squiggly passel of piglets. Although the pig is the star of the show, there are also chickens and cows going about their daily life, eating, sleeping and occasionally kicking up their heels in verdant fields. Most blissfully, there is no talking in the entire film. No people at all.

No one waxing rhapsodic about how animal’s purity transformed them, brought them together with their teenage son, taught them the true meaning of love. For this reason alone, it is a wonderful cinematic experience; it also helps that it’s ridiculously beautiful as well.

There is a flipside to the soulful animal motif, of course: the beastly beasts.

When animals aren’t healing human hearts, they’re shouldering the lion’s share of blame for things going wrong. Long before bats got shamed for unleashing their viral load on the globe, whenever humans had need of an excuse for their bad habits, they looked to the natural world.

Call it the Moby Dick being-a-dick style of storytelling. Disappearing salmon? Blame seals, instead of massive overfishing. Missing caribou? It’s those greedy wolves. Triple homicide? Pin it on a shark, they’re always down for a light evisceration. (Rescuing the reputation of great whites since the release of Jaws has required the ongoing efforts of activists around the world. More than 40 years later, sharks remain the aquatic equivalent of the bogeyman.)

Really, the impulse to place blame on anything other than human malfeasance is at the root of all these depictions and projections of woodland and sea world characters, who only wish to go about their business unmolested. But no, people can never leave well enough alone.

In truth, animals are far more deferential and polite than most humans, more apt to avoid than devour you alive. For every Herzog’s Grizzly Man, there must be hundreds of incidents in which animals studiously avoided people. By comparison, people get into fisticuffs over the wearing of masks at Walmart. 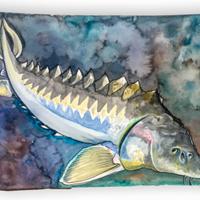 I’m Obsessed with the Features of Creatures

It’s little wonder that some humans prefer the company of other creatures to that of their brethren. (Although dog people are the worst. Outdone only by horse people. And don’t even get me started on the octopi crowd.)

Pity the animal world: they’re either saviours or villains, with little in between.

But to return once more to the undersea world of My Octopus Teacher. At the end of the story, like most animal-human encounters, one creature must slip this mortal coil in order to pass on their innate natural wisdom about mortality and acceptance of the rhythms of the life and death. I think I would have liked it better if she’d wrapped her eight arms around the soppy human and squeezed until he stopped talking.

It’s hard enough being a cephalopod without having to be a saint, as well.