No one, was the answer back in 2005, when the 100-mile diet was launched in these pages. My partner Alisa Smith and I carried out that year-long experiment in local-only eating to gauge regional food security and explain how globalized agriculture helps drive the climate crisis. We had another purpose of course — to sample the tasty pleasures of all things made close to home.

And now it can be revealed. Today there are nearly a dozen 100-mile beers for the quaffing in B.C. Six brewers, in fact, met the rigorous demands of The Tyee’s challenge. And so it fell to me to test each of their offerings in a selfless act of public interest journalism, my findings shared below.

To learn about the challenges and pleasures of making beer with all-local ingredients, read this companion piece in The Tyee.

Most if not all B.C. craft brewers use some local ingredients some of the time. Pick up a fresh-hopped craft ale, for example, and those fresh hops were probably grown locally or, at least, somewhere nearby in the province.

A number of breweries are well known for their dedication to the local.

Crannóg Ales Brewery in Sorrento uses fruit, hops, herbs and even potatoes from local farms (especially their own), and even malt their barley locally — but so far does not have a supply of local barley.

Phillips Brewing & Malting is using more and more Vancouver Island barley and, as their name suggests, they malt it themselves.

Shaken by the pandemic, Four Winds Brewing in Delta decided to spend more of their money closer to home; they started with Meli, a 99-per-cent B.C. beer made with barley, oats, hops, honey, bee pollen and even hay from within the provincial frontiers.

As our honourable mentions demonstrate, there is more than one way to be local. But for The Tyee’s 100-Mile Beer Challenge, we tracked down the most local of local breweries and beers, the ones that truly offer a taste of the soil, water and weather they sprang from. Here they are.

Longwood describes itself as “obsessively local,” and at any given time will have several entirely local beers available. Here are five recent brews.

Pinot Noir Wild Ale: A barrel-aged ale that mixes grain and grape, including wild winery yeasts. Sour (in a good way), juicy and refreshing, this is beer you could put ice cubes in: a global warming beer.

The Big One IPA: A good example of the kind of IPA that ruled the West Coast fifteen years ago and went on to become a classic style. A bit of malt sweetness, bitter but not too bitter, more floral than juicy or fruity.

Quince Tart Lager: Smells like quince, which means that it smells divine. Tart without being sour, and made dry by the quince’s tannins, this is Nanaimo’s better answer to popular citrus and fruit beers like the radler or shandy.

Island Time Lager: A straight-shooting summertime pilsner, but one that showcases the thirst-quenchingness of beer made with fresh malt. The taste of honey in a beer with no honey in it is a bit of magic.

Strange Fellows has one distinctly local beer, made in answer to The Tyee’s 100-Mile Beer Challenge. They’ve been moving more toward local barley and malting, though, and recently acquired a “coolship” — described as a wading-pool like object used to capture free-ranging local yeast.

100-Mile Pale Ale: Dry bitterness against smooth sweetness that somehow transports you into a temperate rainforest. An all-season, all-purpose, resoundingly fresh-tasting beer. Absolutely local, and available only on tap at the brewery.

The Beer Farmers grow their own organic barley and hops, and always have highly local beer on tap at their mountain-view farm. Once they start malting on the floor of an old potato root house early next year, they will have taken the final step toward producing 100-per-cent local beer.

Barrel-Aged Saison with Grape Must: Effervescent, light and tart, with a hint of good funk from the must. A beer for any occasion that needs a lift — like pretty much any day during a pandemic. Commercial (non-local) yeast was used at one stage in the fermentation, but the wild yeasts of Pemberton were involved, too.

East Van veteran Parallel 49 brewed its first entirely local beer this year, with no ingredient travelling farther than 77 miles. It is currently featured in the brewery’s advent beer calendar, and if enough of us let them know we want it, they say they’ll brew some more.

Planetary Blonde Ale: A lighter beer that is also robust enough to work as a winter brew, with a bit of fizz and a bit of bitterness. A good beer for the longest nights of the year.

A farm brewery that produces all of its hops and most of its barley, along with additions such as honey and cranberries. They brew highly local beers, obviously, but so far their malting is done in Armstrong and they use commercial yeast.

Tailgate Light Ale: Barnside’s most local beer is levitatingly light, with hops that add a nip of bitters and pleasantly floral aftertaste. Responsibly low in alcohol, for those who are into that kind of kink.

Locality won’t open until spring 2021, but the farm brewery gave us a sneak preview of one beer made with their own hops and barley, grown using ecologically-minded permaculture techniques; the barley was malted on site. 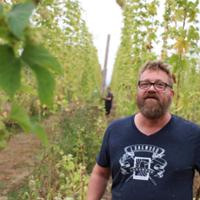 Duality Belgian Single: Exceedingly fresh tasting, with a whole lot going on but all of it with a well-balanced touch. Highly approachable without being one bit boring. Every ingredient comes from the farm, including honey, with the exception of the yeast.

So there you have it. Six B.C. brewers making 10 beers that either meet The Tyee’s 100-Mile Beer Challenge or come damn close — with more surely to come. A toast to a truly local beer revolution!

What are the challenges and distinct rewards of making beer with truly sourced local ingredients? Read this companion piece to find out.