I know one is not supposed to say this out loud, but the idea of watching, reading or listening to anything challenging or contentious just feels exhausting at the moment.

Give me the cultural equivalent of eating buttery mashed potatoes, spooned warm from a pot, while I lie on the floor watching Vin Diesel crash a bunch of cars.

Mmm… Vin. There is an obscene amount of pleasure in making one’s way through all of the films in the Fast and Furious series. Faster and even more furious, please and thanks. Let Diesel’s mono-expressions and the roar of engines form a kind of white noise against which you can gently rest your head, while all six lines of dialogue wash over you, lulling away the stresses of the day.

Sometimes succour/salvation can arrive from the unlikeliest of locations. Sometimes it comes from the past, in the form of good old-fashioned cable TV.

There are channels entirely devoted to films from the ’70s, ’80s and ’90s. Just pick a decade and stay there forever, watching Die Hard over and over again, until you pass out. A bottle of wine will also help with this process. Revisiting places and people from the past, with their big hair, big cars and giant mobile phones, like shoeboxes held up to the side of their heads, is strangely comforting.

Maybe, just maybe, the occasional drama full of grumpy doctors is acceptable. My son Louis has made his way through all 177 episodes of House, starring Hugh Laurie. Every episode is the same — an obscure, mysterious condition that is slowly killing a patient, a last-minute stroke of genius and an ongoing obsession with lupus — the predictability becomes its own reward after a while.

Louis has since has moved onto Grey’s Anatomy, although he’s already developed a deep hatred of Meredith Grey and Dr. McDreamy-creamy-steamy or whatever his name is. Thus far, I’ve held off letting him know who is doomed on that show. I think they’ve managed to kill off almost everyone except for that damn Meredith, who will probably keep offering her narration even in the face of a nuclear holocaust.

Myself, I have a new appreciation for the hoariest of media forms — the lowly sitcom.

It used to be that people pooh-poohed the format as too formulaic, too predictable. Now those qualities are endearing. No swears allowed. No sexy stuff, maybe the occasional off-colour joke, but mostly sunlit, simple and dementedly cheerful. More please.

Call it cultural regression if you need a term.

It’s not just media comfort food, more a form of time travel, a return to a period and place that made more sense or at least is more familiar/recognizable.

Watching these brightly lit stories where people are doing once ordinary things — eating in restaurants, going to school, sitting in an office — and contending with everyday problems – mix-ups, misunderstandings, in-laws, kids, jobs and feelings — is both strangely exotic and intimately familiar. All things are resolvable and solvable in less than 30 minutes.

The very artificiality of the form holds a unique charm — the enclosed, insular feeling of the set, a multi-camera setup, a studio audience or canned laughter.

Unlike documentary or its bastard spawn reality TV, there is no pretense that this is the actual world. Even better, these are not real people or facsimiles thereof, they are characters. Characters can be hurt or wounded, but invariably they bounce back like they were made out of rubber and poster paint. Unless, they’re on Grey’s Anatomy, and then they’re totally boned.

I cannot fully explain it, and please don’t judge me, but I have been somewhat obsessively watching old reruns of The Nanny. I remember thinking it was pretty silly back in the early ’90s, and it hasn’t really improved with age. The jokes are telegraphed from 10 miles out. The sexual politics are highly questionable, and the hair is HUGE! But I look forward to another 30 minutes with Fran Drescher every night at 9 p.m. with giggly anticipation.

Why exactly? I don’t know, only that it fills a certain jagged place in my soul, offering predictability, comfort and a strange sort of coziness, something the Danes or other Scandinavians might have a term for, like Hygge, except in televised form. There’s also the relief in simply escaping the current moment and its considerable toll.

It sometimes feels like we are living in the midst of a dystopian science fiction film, sorting through the remnants of the before times. It’s an oft-used trope in end-of-the-world movies. Think Will Smith in the zombie apocalypse film I Am Legend, memorizing the dialogue from old Shrek films and reciting it under his breath like a connection to the old-timey feelings of comfort and joy.

Nostalgia used to annoy me. I had no patience for old-timers waxing on about the good old days when Soupy Sales, Don Knotts and Lucille Ball reigned over the small screen, or as my grandfather liked to call it, “The Idiot Box.” (I was never sure if he meant the TV was a box that contained idiots or if you stared at it for too long, you would become an idiot. Maybe it was both.)

But I get it now. Nostalgia that is.

In the before times, when you journeyed to different parts of the world, and flipped on the TV in Amsterdam or Paris or Helsinki, you could probably find an old sitcom. It was like stumbling across a familiar face in a crowd. You might not pay these shows much attention at home, but in a foreign landscape they were suddenly welcome, cherished even. A beloved bit of home to comfort you in the darkest hours of jet lag.

I feel that way now about sitcoms right now, like they are familiar places in a new and unfamiliar time. Other folks seem to be experiencing something similar as they find themselves unable to cope with anything taxing.

The Guardian columnist Bidisha shared her version of the experience.

“If the current suspension of normal activities continues into 2021, I’ll have to go for the ground zero nuclear regression option: the original Anne of Green Gables adaptation with Megan Follows, the Beauty and the Beast TV series with Linda Hamilton, then all the Harry Potter films back to back. It’s a form of familiar, screen-based self-soothing and it’s the best anxiety medicine there is,” she wrote.

I am so with you sister.

A friend has watched Becoming, the documentary about Michelle Obama, eight times and counting. This practice, like listening to a song looping over and over, becomes a form of meditation after a time. There’s the comfort in knowing exactly what is going to happen next, which is a damn sight more calming than the real world where you can’t predict anything anymore. 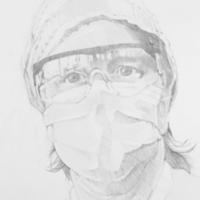 Staving Off Pandemic Panic, an Artist Turns to Masked Portraits

It used to be that sitcoms were a cultural touchstone for a lot of people — Seinfeld, Friends, Cheers, the list goes on. But the form has been overtaken by other fiercer, faster beasts and now feels kind of irrelevant, a leftover from an earlier age. Even contemporary versions feel little out of touch. Maybe it’s this very irrelevance that gives them poignancy. A crepuscular sweetness like a wizened apple.

Watching films and television shows that you’ve seen before, sometimes many times before, also provides you with access to earlier versions of yourself, and there is comfort in that too. A reminder not only that this moment will pass, but that you will pass along with it.

Maybe once things are a bit more settled or less unsettling, I won’t need sitcoms anymore. But for now, they’re like a log in a river, solid, buoyant, a tangible thing to cling to when the modern currents churn and foam.

Maybe one day, far in the future, I’ll stumble across an episode of The Nanny, and remember when it got me through a hard time, and all I will feel is grateful. And also, a certain wonder at that huge hair.