The other night, a fight broke out over Sunday dinner about which generation was, in fact, the worst generation.

After some debate, it was universally agreed that the boomers (born 1946 to 1964) were far and away the most annoying. They had it almost ridiculously good — born into a society flush with jobs and money. A university education was cheap, and one could buy a house for a few shekels and a winning smile. And the boomers are still booming, blessed with more property than they know what to do with and still in the jobs they’ve enjoyed for years, complete with a full pension and benefits.

Generation X (1965 to 1980), of which I’m a member, had it a little less easy. The threat of nuclear annihilation hung over a good portion of our formative years. Gen-Xers sometimes resented the hell out of our parents who wouldn’t shut up about the ’60s — Woodstock, Dylan and how acid used to be so much better — but at least we had fun in the ’80s, dancing to Prince and wearing cool neon Valley Girl ensembles. Generation X also enjoyed a largely intact environment. Sure, there was a spot of acid rain and a thinning ozone layer, but those only made for more mournful ’80s hits.

The millennials (1981-1996) is the group that everyone likes to poop on, but maybe they’ve been given a bum rap. Accused by the earlier groups of being self-absorbed ninnies who spend all their money on avocado toast and high-priced lattes, while simultaneously destroying the diamond industry and sex, the little wieners slogged through the ’90s and the beginning of the aughts carrying a heavy load of imminent environmental breakdown and economic bleakness. Despite being born into an era of diminishing returns, they managed to lead a number of large-scale social upheavals before lapsing back into ennui and nostalgia-laced moments about Harry Potter and Friends reruns.

Which brings us to generation Z or Zed, if you want to get extra Canadian about it. Born from 1997 to 2012, a lot of hope has been pinned to this group of young people and, thus far, they’ve actually done pretty well for themselves. Immersed in the online world since before they could sit up straight, they move through the digital universe with the speed and fluidity of a school of fish, capable of quicksilver changes of direction. The sheer delight of this prankster genius generation is hard to resist.

There are several recent examples of gen Z showing up the dinosaurs of old. The most-high profile was the TikTok folk and the K-pop fans snapping up all the tickets to Donald Trump’s election rally in Tulsa, inflating the numbers to sky-high proportions and setting the groundwork for an epic fail, as the kids say.

There’s a number of similar stories taking place on the political stage and in the familial realm, and occasionally both. Republican Kellyanne Conway’s teenage daughter Claudia inciting folks to leave two-star reviews on Trump’s hotels and resorts is one example. Stephanie Regan, the daughter of Robert Regan, running for office in Michigan, is another. Young Regan stated bluntly: “if you’re in michigan and 18+ pls for the love of god do not vote for my dad for state rep. tell everyone.”

The Zs have continued to turn against older generations with feral savagery, and depending on where you sit on the age and/or political spectrum, this is really funny or slightly terrifying.

A great deal of analysis has been directed at parsing out gen Z’s interests and inclinations, but as a recent New York Times editorial pointed out, reducing any large group to a few commonalities isn’t all that productive or useful. While some argue that we shouldn’t expect too much from the youngsters, others have entirely the opposite opinion.

The truth probably lies somewhere between these two polarities, as it usually does, but what really makes this generation different than those that preceded them?

A number of things, actually.

The Zs are one of the most culturally and ethnically diverse populations, comfortable with sexual identity, gender fluidity, pronouns and the like. But they also fall into the thrall of Instagram influencers with surprising ease. While the Zs wholeheartedly agree that weed should be legal and climate change is happening, on other major issues there is a wealth of opinions. Intersectionality is central to many of their actions and behaviours, whether it’s gun control or Black Lives Matter. But for every gender-fluid protest kid, there’s also some little smug shit in a MAGA hat.

Still, the fact that they’re not an entirely united or cohesive group might actually be a good thing.

The gen Z’s ability to hold multiple, even contradictory ideas is perhaps an outgrowth of their early engagement with the internet and its constant firehose of information. This digital fluency also makes them more discerning about how they engage with the online world. They were among the first to walk away from Facebook en masse.

The impulse to understand and control these youngsters for political and economic purposes goes on in multiple ways. A number of creepy marketing studies have offered way to exploit their particularities for corporate gain, but the Zs are actually quite good about understanding these forces and resisting them.

They also share this foundational moment. A study shows how recent events have impacted generation Z. In short: “Gen Z now sees the pandemic and Black Lives Matter movement as the two most impactful events of their lifetimes.... Trust in institutions is falling across the board…. gen-Zers are less optimistic about the future, but increasingly believe they can shape it.”

Like most humans, the Zs are a bundle of contradictions, both individually and generationally. Ask any young person their thoughts on a variety of subjects and you’re likely to get back a variety of opinions. Having raised and currently living with a gen-Z kid, I thought I’d pose a few questions to my son Louis. Speaking for an entire generation can’t be easy, but he’s pretty confident with his opinions, so here goes.

What makes your generation different?

We’re the first generation with access to competent computers and the internet.

What are the biggest issues facing your generation?

Climate change, systemic injustice, institutional corruption, ever-growing economic disparity between the ultra-rich and everybody else. It’s mostly umbrella terms that cover a multitude of problems.

Are you more or less conservative than the people who proceeded you?

More conservative, based on the fact that I’m about to emerge into a less-than-ideal economy but still maintain a lot of left-wing socialist ideals, lots of radical ideas as well.

Are you more cynical than previous generations?

I’d say yes since in the not-so-distant horizon we may be seeing a sort of societal revolution where the prejudiced systems of old will be systemically broken down. What is worrying about this is that a lot of our institutions will have to be restarted from scratch, which leaves a lot of uncertainty in the air.

What would you do differently to make change in the world?

Incorporate a lot more justice into our lives, not just equity, but rather break down the barriers that limit others so to give everyone a fair and equal chance at success. The situation we’re growing up in isn’t the same as the previous generation. So, they [older folks] may think they understand but they don’t, because it’s entirely different.

What would you like people to better understand about gen Z?

One: stop giving us so much shit. Two: different generations face different situations, let us do us.

Do you resent all the people who made the world such a mess?

Yes. There are a lot of things to complain about, but it can be simplified to a famous quote from JFK: “Ask not what your country can do for you — ask what you can do for your country.” Because the new generation is trying to do a lot for our country, but our country isn’t doing much for us: as in our leaders need to stop sitting on their privileged asses atop Capitol Hill, doing fuck all for the future of our world. Other than that, all I have to say is: Black Lives Matter, Indigenous Lives Matter, arrest Breonna Taylor’s murderers, defund the police.

Thanks, my extremely opinionated child.

Despite their sassy ways, generation Z is facing some hefty issues, many of them bequeathed by the people who came before. They are on the frontlines of major battles, not just racial and economic justice, but the coming environmental crisis. To be fair, each generation has faced challenges — the Vietnam War, nuclear threat, climate collapse, and now a global pandemic. 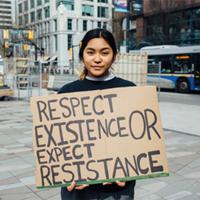 While earlier groups have the benefit of already completing their education and being well established in their careers, the current generation is contending with precarity on all kinds of levels. Accompanying this level of uncertainty is plenty of alienation, depression and anxiety. Nothing is what it once was. Economically, environmentally, and of course culturally.

Is there too much pressure on their shoulders to save the world? Probably. Will time and hard experience calcify their tender hearts like the generations that came before? In all likelihood, yes. Will they eventually grow old and cranky and blame their parents for everything that went wrong? Of course!

But maybe, just maybe, they will do things differently and nudge the world along in a new direction.