When the virus came and the restaurants closed and the dish pits ran dry, I was out of work. What to do? Someone mentioned day drinking. This sounded fine in theory, but when it turned from an abstraction into an actual agenda item, I knew I’d be in trouble if I didn’t nail down an extra-mural occupation.

A grocery store required a genial and sober factotum who could, on an as-needed basis, assist the quarantined or self-isolating with making their purchases.

This was how I came to be standing before the dairy case, phone to ear, in the rabid thrall of (let’s call her) Stella.

It was my second day on the job and I’d dealt with quite a few customers who were grumpy for one reason or another, and with this I was patient, for there’s ample reason to be out of sorts, just now. But Stella was beyond the pale. Stella was her own luminescent moon, circling the planet Rancour. She was just so angry, not at me specifically; anger was simply her condition, her generalized state. Stella had a middle-European accent, indeterminate. She was clearly elderly and was somewhat confused, but she knew what she wanted, and what she wanted was milk, whole milk, organic milk, and she wanted to freeze the milk, but she'd had a bad experience freezing milk recently because she'd bought milk in glass bottles and they cracked in her freezer and could not be saved and the milk had been expensive and it had been a terrible waste and a nuisance, too, so she wanted whole organic milk that she could freeze without fear, and no, Stella couldn't come into the store because she was disabled, and no, Stella didn't have any friends or family who could shop on her behalf, and no, Stella couldn't pay over the phone because she'd had a credit card once and that hadn't worked out, and now she was cash exclusive, and that was that.

I opened the dairy case, benefitted from its coolness, inhaled its slightly sour breath, its creamy wafts, as Stella went on and on in this vein for a long, long, very long time. I understood about a quarter of what she said, owing to a bad connection and store noise and her choleric velocity and her accent and my own diminished hearing, but the basic plot elements — milk, freezer, glass, carton — were unequivocal and I shed my initial impatience with her and got so wrapped up in the whole business. It was compelling, it was epic, it was the saga of icy milk, and it required a response no transfer or intercom page or authorized store procedure could handle. I was summoned, in that moment, to be merely human.

So, I got her address, and I bought two litres of the appropriate milk in the appropriate container, which was not glass. I told her I’d come over after work, promised I’d be at her building before 5. I arrived at 4:59, and there was Stella, fuming in the foyer, all hazmatted up to a fare-thee-well, gloves and boots and mask and goggles and hospital style booties. She looked like an astronaut about to make the first wheelchair moon walk. Stella was blind, as it turned out, and didn’t see me standing there, waving the carrier bag of whole, organic moo juice.

“Stella,” I called, “Stella, Stella,” like Stanley Kowalski but with a useless graduate degree. 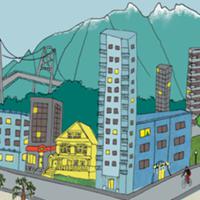 “Are you Bill?” she hollered.

“I am Bill,” I said, with deep feeling, replete with that commingling of triumph and relief another Stanley must have known when he finally stumbled upon Livingstone.

Convincing her to open the door was a big deal, and setting down the bag at an appropriate distance was huge, and she was petulant and argumentative, which, given our short but fraught connection, was not a surprise. She foisted a twenty on me, tossing it as one might a clothespin at a milk bottle at a kid's party; 20 bucks, which was more than twice what I’d paid, and she wouldn't take change, I think because she was concerned about contamination. She wanted to gather her milk and get back to her apartment and her waiting freezer. Her last words to me were, "Go! Go!” which I did, did.

Time passed. Now, I work in the dish pit of a dim sum joint, but I can’t stop thinking about her, about Stella, who might be 70, 80, might be 100, Stella and her milk, hardening, hardening. I can’t stop thinking about the sweep and breadth of her unknown narrative, who she is and where she’s from and where she’s been and what she’s seen and heard and done; can’t stop thinking about all that’s still vital, that beats beneath the insulating carapace of what seemed her nastiness, but was probably made more of fear and panic. I don’t suppose I’ll ever see her again, but I’m grateful for her example, her lesson, even if it wasn’t intentionally taught, of stubborn endurance. To be that old, and that frail, and yet so undiminished, still so full of the fierce need to go on living. To merely be. I was, and I am, amazed by her.

The world changed. It froze and cracked and I brought an old lady some milk. That’s my war story, if I live to tell it.

Have you been surprised to find yourself the recipient, or giver, of some small act of human kindness during pandemic times? Please post a comment below.