It’s Christmastime in Vancouver’s West End, and you are invited into the crowded snow globe that is the downtown neighbourhood. This is when and where former CBC personality and author Bill Richardson has set his new short story collection, published just as we, and his West Enders, ponder what 2020 will bring.

Richardson’s characters seem like the last bohemians of a very specific West End. It’s not the West End of railway money nor the new West End of condo living, rising rents and a United Nations of residents. Richardson’s creations are from the West End sandwiched between, the one of swingers, of counterculture, of affordable housing and of the growth of Davie’s queer community post-Stonewall. In mainstream Vancouver memory, this is the West End that has cemented itself as the West End.

Of one of his first homes in the neighbourhood, Richardson writes in the foreword: “$165 a month for a funky one-bedroom above a bakery and a television repair joint and an antique store where I bought the embroidered kimono I used to wear when I went out dancing.”

Like the humourist himself at 64, Three Ships’ West Enders are in the later stages of their middle age. Possessions and the past are burdensome. Relationships split. Children seem foreign. Parents are on their way out. The neighbourhood they once knew seems to be on its way out too. A tote from bygone Duthie Books is treated like a saintly relic. The Denman Cinemas is now a dollar store. And seemingly any piece of real estate that isn’t a condo tower — whether a supermarket or gas station or apartment building — is about to be turned into a condo tower.

The denizens of Three Ships navigate the question of “what now” as time bears down on them, their neighbours, their beloved neighbourhood and the world outside the snow globe. A character turns on the radio to hear: “More news of homelessness. Fentanyl. Oil spills. Another recession...”

Here’s how some of the tales start. In “Sin Error Pining,” a widow in Brandon, Manitoba, calls her son in the West End, only for his partner, who she calls his “roommate” and “corruptor,” to pick up. In “Sinners, Reconciled,” Bonnie feels like her life has become a novel, saying aloud to herself in disbelief, “I am sitting at the table in the leaky condo of my dead mother.” In “Everybody Knows a Turkey,” Conrad’s dog Minnie, who shares a name with his ex-wife, gets skunked — a “heritage feature” of the West End that Richardson is no stranger to after 30 years of owning dogs in the neighbourhood.

“Since We’ve No Place To Go,” which opens the collection, is the most jam-packed. We enter the final days of the Santa Maria, one of the neighbourhood’s many wood-frame walk-ups with such names, which, along with its neighbours the Nina and the Pinta, have been scooped up by a developer “as though in a game of jacks.” Coming fall 2020: a massive mixed-use development. We meet the current property manager Rosellen, whose name sounds like a West End apartment building itself, as well as the former manager Brigitte, who’s been around since the beginning in 1954, and is the Santa Maria’s “living memory and conscience.” We meet the residents, known to Rosellen and Brigitte by both their names and room numbers. Richardson adds a dose of mystery with the disappearance of an angel decoration — Christmas is very important to this building, which covers the “Maria” at the front entrance so that it only displays “Santa” — as well as a dose of West End weirdness in the form of Vidal Papadopoulos, the nudist who displays himself from the window of a neighbouring building. All the bittersweet ingredients of a wake are in here as the Santa Marians prep their last Christmas together. 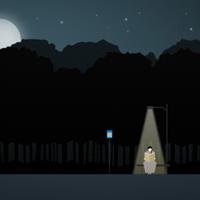 These Authors Gave Us Hope

(As a book by a voice of CBC, almost all of Richardson’s characters feel like the most fervent CBC diehards, opinionated and cultured encyclopedias. One character calls the moment her daughter was interviewed on air to be her “pinnacle of achievement.”)

Richardson’s prose is dense for a dense neighbourhood. He stuffs jokes and memories into each paragraph, just as his characters stuff treasured stuff into their apartments, from L.L. Bean flyers to a large collection of remote controls, one for a gas fireplace. All these details tell of the lives they lead.

It’s an elegiac holiday read as characters ache and reminisce while the beloved landmarks of the West End are claimed in the background by “cranes, backhoes, diggers.”

Be warned if you have reactions to this brand of twee Canadian realism. It’s strong, like over-spiked eggnog or Stuart McLean on west coast espresso. Those who love the stuff will enjoy the buzz of sentiment and hug Richardson’s collection close.