British Columbia was the subject of artist E.J. Hughes’s extraordinary images. Not just the province’s majestic mountains and pristine lakes, but smaller, more ordinary places. Farmhouses, working harbours and lonely stretches of wilderness outside of towns like Kamloops, Kaslo, Riondel and Chilliwack — Hughes immortalized these sites in colours and forms so delectable they’re almost edible in their beauty.

In this time when most people can only look B.C. from a distance, The Tyee asked writer Robert Amos about Hughes’s work and what this place truly meant to the painter. Amos is the author of two books on Hughes: E.J. Hughes Paints Vancouver Island and E.J. Hughes Paints British Columbia. A third, The E.J. Hughes Book of Boats, is planned for fall release.

Amos met Hughes in 1993 after receiving an invitation from Pat Salmon, the artist’s “biographer, friend and chauffeur.” A relationship blossomed from this initial meeting, and Amos became Hughes’s biographer.

Born in North Vancouver, Hughes moved to Victoria in 1946 and spent time as a war artist before settling in Shawnigan Lake on Vancouver Island with his wife Fern. Although the Cowichan Valley proved to be one of his favourite subjects, Hughes undertook many prolific sketching trips across the province, collecting ideas and images that would later become some of his most iconic works. Hughes spent his remaining years in Duncan, painting six days a week. He passed away in 2007.

Amos retraced these journeys, looking through the eyes of the famed painter to see the true splendour of B.C., from Stanley Park to the Kootenays. Now seemed an ideal time to revisit their remarkable beauty.

The Tyee: In this period when people in B.C. are largely confined indoors, what do you think E.J. Hughes’s work provides?

Robert Amos: Hughes, more than most people, was dedicated to staying at home. His way of working was to bring out drawings he had made years before and develop them to their full potential. He sat in the spare bedroom in his modest home and revisited his favourite experiences. Each of us has a lifetime of experience. Now is the time to make something out of it.

I grew up in the suburban flatlands of Toronto. At art school, everyone was aiming for the big time — New York. But I didn’t want the suburbs or New York. Arriving in Victoria in 1975, I discovered my place and chose it as the subject of my art as well. My example was E.J. Hughes.

Hughes depicted what was right in front of him. He was very productive, probably because he stayed at home. Whenever a Hughes exhibition came my way, I went straight for it. Coming out of the gallery, the world looked like a Hughes painting. He taught me to see things his way.

The term that you use in your book to describe Hughes’s process is “observational realism.” Could you talk about this with respect to Hughes’s work?

Hughes was a “realist” landscape painter and trained under Charles H. Scott at the Vancouver School of Art from 1929 to 1935. Scott had studied at the Glasgow School of Art, and he learned the traditional, pre-photographic way of painting.

Rather than paint on location like the Group of Seven, Hughes made drawings on site. Sitting for two days in the front seat of his Oldsmobile, he drew what he saw out the car window, using one pencil and a single piece of paper, about 11 x 14 inches. And on the third day he would return to the place and write his codes for tones and colour on the drawing.

These drawings accumulated. In his studio, sometimes many years later, he would take one up and make a fresh and bright oil painting or watercolour. The canvases are sometimes four feet wide and took Hughes six weeks of concerted effort. He was guided by his memory and the original drawing — nothing more.

Of course I admire his subject matter, but what I find compelling is his unwavering concentration. A pebble on the beach, a clear-cut in the distance, and every wave in between — each is painted with infinite care.

Other than the extraordinary beauty and variety of the province, what was it that made B.C. such a compelling subject for Hughes over the years?

“One of the main reasons I paint,” Hughes once said, “is because I think nature’s so wonderful that I want to try to get my feeling down about that on canvas if possible. I feel that, when I am doing my painting, it is a form of worship.” With this attitude, even the simplest things provided him with an opportunity for transcendence. To see a world in a grain of sand, as William Blake put it.

Hughes lived the majority of his life in one location and often returned to favourite subjects, reworking them multiple times in his paintings. What do you think home and place really meant to him?

Hughes lived in Shawnigan Lake and Duncan. He did field studies across the province in the 1960s, but from 1951 until 2007 he gathered most of his images nearby, along the waterfront of the Cowichan Valley. From Mill Bay to Crofton he could see the snowy peaks of the Coast Range in the east, visible over Salt Spring Island.

The middle distances were animated by the waters of Maple Bay and Stuart Channel. And in the foreground were boats of all sorts: steamships, ferry boats, logging boats, fishing boats. What more could an artist want?

Many of the works in your book E.J. Hughes Paints British Columbia originated from trips that the artist undertook along the B.C. coast, as well as parts of the Interior. In retracing these sketching trips, were there many revelations or surprises for you in looking at these landscapes?

For some years I’ve made it my mission to go to each Hughes location and find the very place where he set up to draw. The province has become a treasure hunt, with a beautiful subject at the end of each journey. When I discover the spot, there is a sense of rightness, though it can take some looking to find it. Trees have grown up and roads change.

Only when I finally arrive at the location do I understand how much Hughes “made up” in his realistic paintings. I recognize the site, but the painting doesn’t look like a photograph of it. Once I went to Gabriola Island and sat on the shore to paint Taylor Bay as he had done. I was certain I was in the right place, but the opposite shore seemed much farther than Hughes had made it, and in no way could I make out the individual arbutus trees. Adrian Chamberlain, who grew up there, said it well: “The impression is not really reality. Instead, Taylor Bay is recalled as in a powerful dream.”

You mentioned in an earlier interview that the people who live here have rarely seen some of Hughes’s paintings that are featured in your books. How important is it to you to ensure that Hughes’s images and understanding of B.C. are more widely accessible? 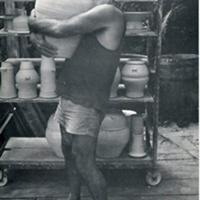 'Thrown': Respect for the Ordinary Pot

Painting is a solitary behaviour, and Hughes avoided interruptions to the point of appearing to be a recluse. Fortunately, from 1951 until 2000 Hughes had an exclusive contract to sell all his work to the Dominion Gallery in Montreal, Canada’s most prestigious gallery. They then sold it to all the great national collections. During his lifetime only a few of his paintings found homes on Vancouver Island. And those are rarely shown.

But, in the end, making pictures is a form of expression, and Hughes intended to communicate with us by his paintings. With my books it is my goal to share his images not just with their fortunate owners, but with the people they were meant for — the more local, the better. It is an honour to facilitate this communication.