Making my way through the streets of Cambodia’s capital city en route to work two weeks ago, I was struck by the sense of normalcy blanketing the city alongside the sticky 40 C heat. During my daily stop at the coffee cart across the road from my apartment, the young Khmer girl who had by then memorized my order asked me, tentatively, “Are you worried?”

She muffled the awkwardness with a giggle, as if it was silly to be stressed as Phnom Penh’s perpetual sunshine beat down on our shoulders and caffeine was on the way. At the time, Cambodia only had reported a handful of COVID-19 cases.

It was a simple question, but I didn’t know what to say to her.

The night before I’d been awakened at one in the morning by a barrage of pings and chimes: texts, Facebook notifications and WhatsApp messages, all wondering when I would be coming home.

“You seeing this right now?”

“Is your flight going to get cancelled?”

I propped myself up in bed on one elbow and tried to focus bleary eyes on Prime Minister Justin Trudeau delivering what would be the first of daily national addresses. This one represented a marked escalation in the way that Canada was approaching the pandemic: the country was now closed to foreign visitors, excluding Canadian citizens and permanent residents.

I was up for most of the night. All I could think about was needing to get home. Two days later I was on a plane leaving behind the young woman at the coffee cart and over 16 million more Cambodians who, I fear, face the ravages of a pandemic sweeping a country poorly prepared.

Cambodia isn’t a dictatorship; in fact, it is classified as a constitutional monarchy. But its one-party regime, which is rigid, often violent and seeks to please China next door, has set the country on a single-minded path to downplaying the realities of COVID-19. The Japan Times aptly labelled the approach of Prime Minister Hun Sen a “political gamble” as he bet the health of his citizens against diplomacy.

As a journalist working in the capital city, I felt increasingly frustrated with how little information was being made publicly available, especially when held against the backdrop of fear that has been cultivated in Cambodia in recent years.

Such tactics were on display when the government charged Canadian journalist Zsombor Peter and a colleague with incitement to commit a felony for his coverage of an election campaign in Ratanakiri province for English-language newspaper the Cambodia Daily in 2017.

As I covered the trial for the Globe and Mail in the final days of last year, I could not knock on the door of the Cambodia Daily to gather interviews. Weeks before Peter was charged, the paper was given a US$6.3-million bill for allegedly unpaid taxes, forcing the paper to close.

“Many journalists continue to do stellar work in Cambodia and internationally,” Kevin J. Doyle, who was the Cambodia Daily’s editor-in-chief from 2004 to 2014, told me. “However, the lack of in-depth day-to-day reporting that the [Cambodia Daily] and the [Phnom Penh Post] once provided has left a daily news information void.”

And now COVID-19 was making the price of that void abundantly clear.

When people started randomly passing out in the streets, a current of fear shot through the city, propelled by unsubstantiated civilian claims on social media that the incidents were driven by untreated COVID-19. Hun Sen has insisted that people should be more scared of fake news — like this might be — than of the virus itself. But this is the real fear of the virus, one that goes beyond Phnom Penh: that we can’t know the true magnitude of its spread or its force. In countries without transparent, democratic systems in place, that takes on new meaning, one that I saw firsthand.

Hun Sen has addressed the public, and in particular reporters, scathingly over the past few months. During a televised speech on Jan. 29 he threatened to kick journalists wearing masks out of the venue, scolding that “the prime minister doesn’t wear a mask, so why do you?”

In late February, some working journalists were invited to a workshop to learn how to report on COVID-19 “properly.” Misinformation is certainly a global issue, and one that will not be tackled without training and dialogue, but as reporters struggled to report out information on how much testing was being done, who was sick and whether the Cambodian health-care system was up to the challenge, the effort rang hollow to me. Even my questions to well-known NGOs went unanswered for fear that their carefully nurtured relationship with the government would come to a speedy end.

As Vietnam stopped letting in foreigners with passports from Europe’s Schengen Area and Britain and Thailand talked about closing its borders, Cambodia, sitting right in the middle of the Southeast Asian region, seemed blissfully unaware of all that was happening outside its borders.

It was as if everyone knew that the situation was either much worse than we knew or about to blow up to epic proportions, and everyone — or at least the people who mattered, the people who could have made a difference — were too afraid to say anything. Those who did were persecuted. Earlier this week Hun Sen capitalized upon the crisis by arresting opposition activists on various charges, such as conspiracy and spreading false information.

My workplace cohort, roughly half expats, half locals, began to fray at the edges in the weeks before I departed the country. A good friend of mine left for Portugal, another moved up her flight back to Copenhagen. One of my roommates, whose family lives in Manila, felt that staying in Phnom Penh was the best option.

I chose to come home because as the number of emailed urgings from the embassy increased, the number of commercial flights out of Cambodia diminished. The day I flew out, I got another flurry of messages. The street that my friends and I frequented for drinks, Bassac Lane, had been reportedly raided by police enforcing new social distancing measures the night before. Was this true? I have tried but can’t verify it online. Nobody seems to know if new rules have finally kicked in. In Cambodia, the truth of the pandemic remains shrouded in rumour and political posturing.

What facts can be gleaned indicate the tide has slowly started to shift. The Cambodian government is declaring more cases, partnering with health organizations to conduct further testing (though still at an incremental pace) and tightening up the border after shutting schools. Perhaps Hun Sen has finally begun to acknowledge the gravity of the situation, for political reasons or otherwise. 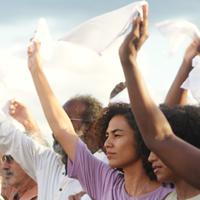 The Film of the Moment is ‘Bacurau’

But as Foreign Policy said last week, “it’s the case of too little, too late. Health services are rushing to find space to treat and quarantine potential cases, while the Cambodian public has been panicked by sudden and dramatic requests to self-isolate.”

Back in Canada, I feel uncomfortable hearing people complain about having to socially isolate. Tuesday morning, the hashtag #TrudeauDictatorship was trending; a response to the prime minister’s announcement that legal and financial penalties would be amped up against those who refused to acknowledge isolation orders.

As I pace my Vancouver apartment, half-heartedly practicing mindful breathing and yoga stretches, I can’t help but feel like I’ve driven past a car wreck on the highway, slowing just enough to contribute to a growing traffic jam but not stopping to help with anything. That feeling washed most strongly over me during my stopover in Taipei international airport. I could not stop asking myself whether I’d made the right choice by leaving a country that badly needed accurate reporting. I was gripped by a sense of nausea, but no answer.

My anxiety is knotted with privilege. Canada has yet to spiral into catastrophe as have China, Italy and New York. I trust my government and do as instructed. I sit at home, self-isolated. And I think about the young Cambodian woman who likely is still working at the coffee cart, earning money for university, handing cups and cash back and forth for hours each day, asking the occasional passerby how much she should be worried.