The decaying letters, in a font that evokes the saloons of the old west, once welcomed visitors to the Gold Nugget Motel of Yale, British Columbia.

No longer hosting guests, it’s one of many crumbling ruins on the banks of the Fraser River captured by B.C.-based photographer Jeff Downer.

There are grand narratives in his pictures, from the allure of the Gold Rush to the glow of the Hollywood limelight, when Sylvester Stallone came to the province 38 years ago to shoot the first Rambo.

But they don’t seem so grand anymore as Downer shows us the Fraser today, with its dated tourist traps and tired bridges and buildings.

The pictures are part of Downer’s exhibition Gol Nu Get Mote, and you can see them at Fort Langley’s Fort Gallery until Feb. 15. It’s the first of four exhibitions in the gallery’s Fraser River Project.

The gallery on Glover Road — once a general store, situated on the site of the historic fort beside the river — is a fitting home for works that ponder place.

Downer was first drawn to the river in 2012, when he visited a friend who lived in a permanently moored ship by New Westminster’s Queensborough.

“I would take the train out to 22nd Street station and walk over the bridge to their boat on the river,” said Downer. “I was taken immediately by the peculiar ways people lived and how visible industry was on the river.”

One local he encountered during a bike ride lived in a beautiful green house with tidy topiary.

“It was in the winter, and there was a dusting of snow on the ground, and smoke rising from the chimney of the house,” said Downer. “The whole scene was very quaint… Surrounding the house on all sides except the front were rows of some kind of deciduous tree, fairly young, and very intentionally planted, as each tree was very close together.”

After he took a photo, the owner of the house came out to greet Downer. “He told me he planted the trees years ago as a retirement present to himself,” Downer said.

The reason: to sell the wood for toilet paper. Downriver was the Scott Paper Mill, now Kruger Products.

A mentor of Downer’s saw his pictures of the area and pointed to the work of an American photographer named Alec Soth, who in the early 2000s made road trips for his work Sleeping by the Mississippi.

Soth’s pictures captured the everyday life of people living near the river, as well as symbols like crosses and star-spangled model planes hinting at grander American mythology.

Downer set out on his own odyssey to capture the Fraser, with its role in colonial B.C. history — empire building, resource extraction, industry and transportation.

At the time he was taking a class on archives at the Emily Carr art school, and a survey of the Fraser and its lingering histories seemed the perfect project.

“I wanted to find traces of the recent past in towns and pit stops,” Downer said, “and how their histories might endure despite being transformed through time.”

He traced the river from where it meets the ocean in Richmond all the way up to the community of Pavilion in the Fraser Canyon northeast of Lillooet.

In one picture a cheesy sign by the highway says “Welcome to Hope: Chainsaw Carving Capital” against a landscape of snow-capped mountains. Another picture from Hope features a tourist photo-op by a parking lot: you can put your face through a wood cutout to become Rambo himself, wielding an M60 machine gun.

There are other nostalgic objects, like old plates of Princess Diana in cardboard frames and posters of Elvis alongside posters of trucks in a café washroom. These traces of the recent decades feel out of time, long past their due dates, especially in a setting that Indigenous peoples have called home for millennia.

“They capture really strange moments of interaction between sublime natural landscapes and the human intervention onto that landscape,” said Alysha Creighton, the Fort Gallery’s exhibition chair. “It really makes us think: how are we interacting with this amazing place?

“[Downer] picks up on these pioneer, settler myths of the west, of the unlimited abundance and resource extraction that drew people to the Fraser River Valley. And then he reveals the emptiness of it all, the hollowness and falseness of it. You see tourism in the area still drawing on those ideas.”

Fort Langley itself is currently decked out in large photographs of colonial romance.

Eric Woodward, a Langley township councillor, owns a number of buildings downtown and wants to redevelop them. But the township is worried about the dead space that would be left between the time buildings are demolished and new ones approved and built, especially as the community’s built heritage is a tourist attraction.

“They’re very nostalgic,” said Creighton, in a “dead white people” way. “It’s interesting to have a photographer [like Downer] come in and enter that conversation.”

Some of Downer’s images pair the colonial Fraser with the uber-contemporary. One shows a collection of objects from Fort Langley’s early days — jewelry, a silver spoon, a sample from a Hudson’s Bay blanket — while another is of little red drug bags he found at a Hope high school. It makes for a fascinating archive that spans almost two centuries.

Though there are no human beings in the work, the pictures are “so suggestive of human presence,” said Creighton. “It almost feels post-apocalyptic. Where did all the people go?” 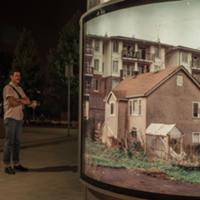 The New Richmond Sizes Up the Old One

One can certainly imagine Downer as an archivist of the future hired to traverse an empty landscape to understand the people who once lived there. What narratives did those people tell about place? What was their relationship with the river?

Even in the time Downer has been working on the project, some of the Fraser’s ruins and relics are already gone.

There is no more “Elvis Rocks the Canyon Café” of Hells Gate. GOL NU GET MOTE has lost a few more letters. And the house of the man in Queensborough, who so lovingly planted his trees for their ultimate end as toilet paper, has been turned into a new townhouse development.

“I really wanted to go back,” said Downer. “So many of the things that I’m drawn to are on the verge of erasure and don’t exist for long. But to capture time and change there’s photography.”

The project is still ongoing. Downer intends to continue further upriver with his camera.

Gol Nu Get Mote is showing at the Fort Gallery (9048 Glover Rd.) in Fort Langley until Feb. 15. There will be an opening reception and talk by Jeff Downer on Jan. 10 at 7 p.m. He will also be leading a workshop on do-it-yourself printmaking on Feb. 9 at noon. More information here.