The new Richmond is sizing up the old one.

If it came to a fight, the heavyweights look like they could knock out the wood-frame houses with a single punch — the setting of many family lives, gone in an instant.

Four of Downer’s images of residential Richmond were on display outside the Lansdowne Canada Line station in 2017, a public art exhibit called “Fragments of a Chandelier” in collaboration with the city and the Capture Photography Festival.

The exhibit ended early last year, but the displays of urbanization captured by Downer represent only a small sample of the change that continues to unfold around Richmondites. Visit today and you’ll see mountains of dirt unearthed where strip malls once stood and new Tudor rowhouses so uniform it’s as though they were printed on the landscape with a paint roller.

But whether Downer is capturing an urban evolution or the eve of an extinction event is up to you.

This art is important in a heated region where so many are pointing fingers at wealthy Chinese who have landed in Richmond for such things as birth tourism and money laundering.

Instead, Downer points his camera at the landscape, inviting us to slow down and ponder what’s happening on the ground to the fabric of a globalizing community.

These are scenes that locals in their cars only glimpse at high speed. The absence of people and demolitions in action add to Downer’s impartiality — there are no actors to blame, no violence to gawk at.

Instead, what he offers are layers.

In “Shrubbery,” we see a tired bungalow with a stained wall and a peeling gable, yet hedges in the foreground are immaculately trimmed. Behind the property is a fence, as if to keep the old house at arm’s length from the handsome townhouse complex that’s arrived next door.

In “Scarecrow,” a yard is peppered with artifacts for the eye to discover, like a polycarbonate skin shedding from the skeleton of a greenhouse. (I didn’t even notice the scarecrow until Downer referred to the image by its title.) There’s another old house and another fence, this one more imposing than the one in “Shrubbery,” perched on top of a concrete wall. The new apartments in the back like their distance, with dozens of windows and balconies keeping a close watch on their ramshackle neighbour.

There are physical layers as you peel at each photograph, but also layers of history.

“The photography flattens all of those layers into one frame, so you’re able to pick through and read all those layers and history in one image,” said Downer.

And while there’s nothing overtly political in the shots, the contrasts hint at the creep of wealth as housing supply is satisfied.

The other two images show how the new mimics the old. The lamp of “Street Lamp” is weathered, but definitely not as old as its Victorian design tries to pass it off to be.

In “Facade,” we see a house that fails to cross the uncanny valley. It has stone blocks applied like wallpaper and a barn-like garage that will never see a horse trot through its doors — perfect fodder for the blog McMansion Hell.

City staff once told Downer that a resident saw the house of “Facade” and wanted to know more about it. They thought he was a realtor.

As someone who photographs ironies, Downer was pleased with the response.

Downer’s images are remarkable, yet unremarkable. The houses he preserves in his work are not the gems that lovers of heritage in Vancouver or the North Shore would fight for, let alone miss.

ON ‘FRAGMENTS OF A CHANDELIER’

“Jeff Downer uses photography to engage with multiple and overlapping histories to comment on life, globalization, integration, and alienation. In Richmond, very disparate, unique, and established communities are being united by a larger urban sprawl, or rather being taken over by it.

“Facets of urbanity loom large over this city and come to threaten the future of small communities, the erasure of their histories, and the displacement of their persevering citizens. In many instances, a single vantage point offers several layers of history contiguous to each other, as if the new development is growing naturally from what already exists. For many, new condominium developments are ideal places to live. They are clean, sleek, designed, and manicured homes of which there are thousands. When viewed critically, however, they are formally akin to a Hollywood film set—a flat-screen facsimile for the real thing. This type of development is not new to Richmond, nor the Lower Mainland at large; this sprawl is happening on a global scale as the world’s population continues to grow.”

After all, Richmond isn’t often photographed. The new developments aren’t special either; they are today’s denser rendition of the classic American suburb, the same architectural fast food, but with more patties.

And yet the shots have great depth, because of how Downer aligns the contrasting elements with his camera.

The tradition of capturing altered landscapes was popularized by the New Typographics, photographers who shot 1970s America where nature eroded and suburbia sprouted.

The scenes are mundane, yet moving. Critics called it “beauty in the banal.” The images are stark, but there’s romance.

In 2008, Downer shot his home city of Port Coquitlam in this tradition. The stage: the development of land that was once part of the Pickton farm, owned by serial killer Robert Pickton.

In one shot, a cow grazes in foreground as a neat row of rooftops peek out from behind mounds of dirt.

Downer says he makes these pictures as a “gesture of remembering what was once there,” to document “how quickly a place can be erased and how quickly it can move on.” That’s how he arrived on the Richmond exhibit’s title, “Fragments of a Chandelier.”

“What I noticed when biking around the newer homes was that you’d be greeted in the front door by a massive chandelier,” he said. “I was thinking about the fragments that created the chandelier, and how they got to that point. Crystals are amassed histories and pressure put together.”

It’s admirable to see city-supported works of art like “Shrubbery” and “Scarecrow” that capture the histories and pressures that make up residential Richmond.

There is another kind of heritage and encroachment displayed in Downer’s photographs that didn’t make it into the exhibition.

A similar question is asked in another shot: a bird’s nest has appeared in the “o” of the Toys ‘R’ Us logo at one of Richmond’s many fortress-like shopping malls.

To me, Richmond has always been a city with hard lines drawn between what’s for people and what’s for cars, what’s public land and what’s private, what’s local and what’s immigrant, where nature ends and urban begins.

It’s a place where people are ferried from A to B, with little life and little mixing in the spaces between buildings. The serendipity of street photography is almost impossible in the expanse of suburbia.

“Being in a car, you’re not able to ‘see’ potential pictures,” he said. And because of the city’s size, walking — his usual method of transportation while shooting — wouldn’t work either.

So Downer biked, and that’s how in the shadow of the casino by the parking lots where taxis waited he noticed the houses of Bridgeport. 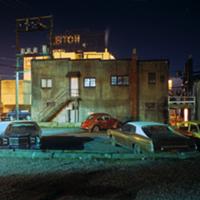 ‘I Did Feel Vancouver Was a Sad Town’

“People were looking at me through the shutters,” he said. “Some of them thought I was a developer and was coming to photograph their property.”

Downer ended up chatting with them and explaining what he was trying to capture. The tone instantly changed. “They were more than interested in helping me out.”

For all the cameras and studios on all the smartphones in our pockets, it still takes a conscious eye to seek out the humour, loneliness and discrepancies in the everyday that Downer likes to capture.

Composing with a camera “makes you slow down and consider your narrative,” he said.

With curious residents stepping out of their houses to chat with Downer, it seems like the narrative of the Richmond they know is one they want told before it’s forgotten.

You can view more of Jeff Downer’s work at jeff-downer.com.