The following words are angry. Their author has discarded the separation between emotion and analysis customary in his line of work. How else could a warm-blooded art writer respond when our most successful artists are increasingly implicated in making urban lives miserable, if not impossible, for the non-affluent?

Four years and $4.8 million went into the chandelier’s making; when it spins, the faux crystals splay like an opulent dervish robe. Graham based its design on a chandelier from late 18th-century France — from the Ancien Regime, whose relentless decadence helped galvanize the French Revolution.

The under-bridge setting is as much part of the work as its over-fed rococo signification. This grimy — but not too grimy — locale lends the decoration an absurdist charm. It’s easy to imagine people who haven’t had to spend much time in such places chuckling over the contrast of whimsy and urban abjection. On a deeper level, the location provides the dark underlining for what this work really is: a self-serving in-joke about capitalist privilege. Spinning Chandelier was produced by Westbank Corp., developer of luxury housing complexes.

I must admit that I want to like Graham, whose early work was gripping in its neurotic, dream-like humour. But a question keeps getting in my way: at what point do we demand of our artistic heroes that they cease in offering ideological cover for vampires and vultures masquerading as city-builders?

Predictably, online conversations about Spinning Chandelier swing between rancour and admiration. Within the art scene, though, churns a painful internal struggle. In addition to having made impressive art Graham has been a friend to many local artists, but this new work serves the interests of neither good art nor communities, only the avarice of real estate developers and investors.

There’s plenty to object to beyond Graham, not least the personal mythology of Westbank’s figurehead and neoliberal guru, Ian Gillespie. Westbank’s website features many “articles,” including a rags-to-riches profile of Gillespie with a photo in which he poses barefoot and leather-jacketed in a luxury Japanese tea house of his own creation. Below this kittenish portrait, we read of Gillespie’s god-like (and easily debunked) ability to weave luxurious beauty and social housing into one sweeping architectural vision.

In funding Graham’s sculpture, Gillespie’s company fulfilled a legal responsibility; as part of city policy, new developments on rezoned sites in Vancouver must devote a fixed amount of their budgets to an art amenity. The development to which Spinning Chandelier is attached is Vancouver House, a futuristic luxury condominium complex.

Westbank describes the complex as a Gesamtkunstwerk — a total work of art — that will bring “visual splendour to daily life and constantly [inspire] its occupants and visitors.” This may well be true for those who can afford to inhabit its opulent suites (or at least purchase them as perpetually vacant investment assets). But if Vancouver House is the real artwork, then what is Graham’s chandelier? Perhaps it serves a similar function to that dutifully scribed profile of Gillespie.

Following the logic of Westbank’s previous use of public art, the banal but undeniable truth is that the piece is an art-washing tool. Through squinted eyes it even resembles an enormous cleaning implement, its glittering crystals standing in for twinkling suds. Westbank bears substantial blame for transforming Vancouver into a city that has been ranked as the second-least affordable on Earth. It has aggressively marketed its luxury suites as investment opportunities rather than dwellings, and is on record as presenting Vancouver’s extreme lack of housing supply and increasing property costs as proof that investors can expect significant returns on their purchases. The process it profits from sets off waves of property value inflation. This class conflict is also one of systemic racist aggression; as much as Vancouver’s capitalization is destroying communities generally, and the art community specifically, it especially affects people of colour, in particular Indigenous people and refugees.

As criticism has increasingly focused on Westbank’s role in the city’s housing crisis, the company’s defenders have invoked its generous construction of affordable housing units.

But as it turns out, developers use of the word “affordable” has been decidedly liberal.

In November, a motion passed by Vancouver council ordered city staff to stop routinely referring to private market rental projects as “affordable” because half of the city’s residents cannot afford them. According to city guidelines (which allow developers to receive lucrative incentives for providing affordable housing), a studio apartment that costs $1,607 per month is considered affordable in East Vancouver, traditionally a working class area. (For an idea of the rate of inflation, I paid about $850 per month in the more upscale South Granville neighbourhood in 2009.) According to Vancouver Councillor Adriane Carr, in order to afford such an apartment a renter would have to earn $64,280. In reality, half of Vancouver’s citizens earn less than $50,000. Put succinctly, the word “affordable,” as deployed by developers and the city, has served only to gaslight an angry and increasingly stressed population.

Spinning Chandelier’s private funding shouldn’t stifle taxpayer criticism either. Like many capitalized cities, Vancouver long ago allowed private infrastructure to encircle and govern public life. The considerable economic resources of corporations like Westbank grant them nearly free rein to shape our cities in search of new revenue opportunities. As this process causes the cost of living to rise, our lives — whether in Vancouver, Los Angeles, London or Berlin — are in turn molded by debt, stress and poverty.

Until now, Rodney Graham could be understood as the happy trickster of Vancouver’s photo-conceptualist generation. To recall his erstwhile brainy absurdity is to be all the more depressed by this court-jester routine. Spinning Chandelier was almost certainly motivated by comedic intention. But where Graham’s previous works took the piss out of personal and cultural mythologies, or tinkered playfully with the mechanics of perception itself, this new artwork-as-joke comes at unmistakable human expense. Consolidated in the symbol of this spinning chandelier is a reminder that no square inch eludes the pursuit of capital.

To the jester’s credit, even he has started backing out of the joke. Given how the conversation around Vancouver’s housing crisis has progressed in the last four years, he told an interviewer, he would likely not repeat this project.

His words have the ring of damage control. After all, when Graham conceived the chandelier in 2015, the conversation about Vancouver’s real estate crisis was well under way. The 2010 Vancouver Olympics brought a mass shift in popular conversation around this issue. Five years later, developers had long since taken hold of the city, and their luxury housing projects were already driving out the low-income population. Graham knew this. Everyone did.

It seems like a logical principle that satire can’t function if it structurally supports the power supposedly being satirized. Spinning Chandelier’s sole interesting aspect is the way it so embodies the failure of critical irony in big-money art. It feels like the work of a very polished edgelord — someone primarily concerned with signalling how nonchalant they are about being bad. The implicit logic seems to be that putting a charged spectacle into the world is the same thing as making good art — so much the better if philistines can’t grasp the shades of cutting irony.

As Ana Teixeira Pinto and Kerstin Stakemeier put it, “Artworld edgelords insist the chauvinistic epistemes in which they traffic must be read as irony, no matter how hurtful or distressing others might experience them to be.” Never mind that the gag’s transgressive frisson is available only to those with lives unimperiled by the financial structure that backs it (how many people enjoy laughing at their own pain?). Irreverently detached, this work feigns a critique of decadence with one hand while serving cake with the other.

What I mean to say is that the piece doesn’t only fail because it constitutes a glittering middle finger to the poor and struggling. That’s just obvious. More deeply, it fails because even the positive responses it has garnered evince a vile combination of distanced privilege and smug reverence for facile critical discourse. It’s bad enough that some are content to relish the work’s apparent beauty, unbothered by its corollary suffering. For the chandelier’s defenders, it is valuable because it causes us to think about these issues. 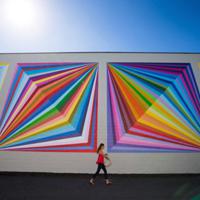 But here’s the thing: the rest of us have already been thinking — have already been seething, for years. This symbol of oblivious decadence shows us nothing that we did not already feel deeply. For this reason it can’t be argued in good faith that its meaning lies in the genesis of conversation. Spinning Chandelier is far more concrete; the sculpture’s material is not only its phoney crystal, but also its urban setting, whose social traumas cannot be divorced from the work. Those traumas, having been inflicted by the exact interests that allow this piece to shine so brightly, are both the symptom and the target of this class war taunt. The gaudy decoration simply is what it is.

Speaking to the media, Vancouver Mayor Kennedy Stewart called Spinning Chandelier “the most important piece of public art in the history of our city.”

You have to wonder if he realizes how right he is. Judging from what I hear — at parties, on Facebook, in private messages, Spinning Chandelier represents a very important breaking point. An abused citizenry, no longer in thrall to the charm of high-finance art, realizes when the joke is on them. At this point, the laughter stops.

Happy holidays, readers. Our comment threads will be closed until Jan. 2 to give our moderators a break. See you in 2020.