Vancouver House, on the downtown peninsula by the edge of False Creek, is due for completion this year. Casual admirers might know it as the “pixely tower,” the “twisty tower,” the “tower that looks like it’s going to fall down.” Superfans likely tell their friends that we’re lucky to have this design by starchitect Bjarke Ingels, that the triangular base grows up to a rectangular top, and that you shouldn’t be worried about this because the 9,600-tonne foundation beneath the seven-story parkade makes the building extra earthquake proof.

The project’s developer Ian Gillespie said that Vancouver didn’t have a single building that “takes your breath away,” so he decided to create one.

Vancouver House attracts all sorts of critiques. “An exemplar new urban typology,” said judges of the World Architecture Festival in 2015. “Sort of iconic,” said one of the city’s former chief planners. “Waffle livin,” posted one Instagrammer.

Why do we care about the tallest towers in our city?

Some feminist geographers point to the phallic nature of the “mine is bigger” contest. Dolores Hayden in her 1977 article “Skyscraper Seduction, Skyscraper Rape” calls skyscrapers one more addition “to the procession of phallic monuments in history — including poles, obelisks, spires, columns and watchtowers.” Tallness projects power, the “masculine character of capital,” as Liz Bondi writes.

These days, it seems like everyone wants to get in bed with Gillespie’s company Westbank, whose collaborators have included First Baptist Church, the Squamish Nation, Telus, the aggressive real estate arm of a public sector pension plan and at one point even the federal government.

Who will live in Vancouver House? The good news is it includes at least one family-friendly three-bedroom unit. That one, however, will put you back $6.9 million plus a $1,547.70 monthly maintenance fee. Then again, you also get five bathrooms and pets are allowed. Another unit, while smaller, sells for millions more.

Gillespie says he has “no idea” whether Vancouver House buyers will be local or global, though units have sold in at least 16 countries and reportedly come with an “asset management” program that insures managers test taps and appliances on behalf of distant owners.

Former Vancouver planning chief Ray Spaxman told the Vancouver Sun this year that developers want potential buyers in Hong Kong or China “to think: ‘I haven’t seen one of those before, I’ve got to have one.’”

Gillespie has compared nabbing a unit in Vancouver House to collecting art. Ingels, after all, is taking the starchitect moniker literally with his work for NASA on imagining a Mars colony.

Gillespie’s hard-working publicity machine will remind that his firm also builds social housing and helps Syrian refugees. And Westbank gives the masses free exhibitions of Italian designer pianos and luxury dresses by the likes of Alexander McQueen, which its head of marketing calls “philanthropy, in a way.” The company says it’s different, that it’s “not motivated by the same things as a developer.”

Should we be grateful? If we can be convinced to think so, that plays to Westbank’s advantage. It’s a smart shield from criticism, a strategy sociologist Zachary Hyde calls “giving back to get ahead.”

Gillespie himself has pronounced the cult of celebrity “fucked up,” even as he writes manifestos for his projects and quotes himself on the wrappings of his construction sites and publishes a $260, 622-page book touting his firm’s own awesomeness. The media often photographs him like an artist or rock star.

“This is going to sound arrogant,” Gillespie once said, “but no one else is willing to do what I’m doing.” 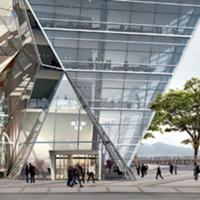 Stop the Dubai-zation of Vancouver

Clearly Gillespie seeks to be not a builder but an icon, thrusting his way into Vancouver’s civic imagination the way his buildings demand to be named iconic. But the word iconic once meant structures “where power and community were exhibited,” noted Spaxman. Vancouver House, as it leans over the city, simply reminds all beneath that to the rich go ever more exclusive spoils.

Famed architect César Pelli, who passed away earlier this year, provided advice for any community offered towers of power by their modern Medicis.

As we are dazzled, we should ask, “This is good, but is it right?”

“It is a great responsibility for any architect to be given a piece of a city to design, however small it may be — and it is clear to me that the obligations of a building to be a good piece of the city are greater than its obligations as an art object or as part of an architect’s oeuvre,” wrote Pelli in Architectural Digest.