When you strike a pose in front of one of Vancouver’s murals for an Instagram snap, you may be helping real estate developers’ artwashing campaigns — a Trojan horse tactic they use to “revitalize” lower-income and working-class neighbourhoods where they own property.

You would be a small player in the effort though, at least compared to the Vancouver Mural Festival, an organization whose sponsors include Lululemon founder Chip Wilson’s Low Tide Properties, Westbank and other real estate corporations.

That’s a critical fact I wish I had known when then-Vision Vancouver city councillor Heather Deal sought support for her $1.5-million “Public Art Boost” mural motion from me and my colleagues of the City of Vancouver’s arts and culture policy council in 2016.

The mural festival wrapped up its 10 days of painting and music this month with a street party in East Vancouver. But on the other side of the city, the mood was much different. More than 60 artists hosted a “Rave against Renoviction” protest at mural festival sponsor Wilson’s mansion to confront him about Low Tide’s renovictions of arts organizations from buildings it has bought as part of a plan to acquire $1.5 billion in Vancouver real estate.

In an open letter signed by more than 400 artists and supporters, the protestors said they came “together because we have a crisis of renovictions and a lack of… independent artist-run studios and music venues, and collective exhibition spaces” in Vancouver.

They claim Wilson artwashes his reputation by sponsoring cultural events and artworks, which “oftentimes… occur at his renovicted buildings and actively contribute to the gentrification process.”

Westbank, another real estate developer that sponsors the Vancouver Mural Festival, also practises artwashing. Last year it hosted a reputation-boosting “arts exhibit” called Fight For Beauty, which many Vancouver artists and I advocated against.

And the developers’ artwashing campaigns are being aided — and subsidized in the case of the mural festival — by the City of Vancouver.

The Vancouver Mural Festival was started with a $200,000 matching grant from the City of Vancouver’s special Innovation Fund. There’s no evidence the city sought proposals from other organizations interested in similar projects. To put this in perspective, long-established cultural institutions such as the Arts Club and Ballet BC received grants of $152,000 or less in 2019 after a rigorous grant application process.

Out of more than 150 organizations that applied for a cultural grant this year, only four organizations considered “major institutions” — like the Museum of Vancouver and the Vancouver Art Gallery — received grants of $200,000 or more.

I was on Vancouver’s arts advisory council at the time and recall that city council approved the special grant for the Vancouver Mural Festival in the same year that it rejected a request from arts leaders to increase the cultural operating grants budget to reflect higher costs. Since then, the city has given the mural festival at least $200,000 more, essentially subsidizing real estate developers’ artwashing activities. The 2016 “Public Art Boost” motion from Deal turned out to be a “property value boost” for developers.

Now that the malpractice of artwashing has been identified and named, how do we put a stop to it?

First, the city needs to stop supporting and promoting the artwashing vehicle for developers — the Vancouver Mural Festival. They should re-allocate the funds to the city’s general mural program and other cultural activities that do not contribute to artwashing.

Those involved in making city policy need to be aware of how artwashing is used by developers and the social consequences. When art is used as part of a strategy to “improve” neighbourhoods and pave the way for gentrifying developments, the result is often damaging to current residents.

The city decision-makers and advisors should incorporate this knowledge in their evaluations of development and cultural proposals. It is easy to say “yes” to greater density for a building that offers public art as a cultural amenity, but it is much harder to approve the same development when you know it may result in the displacement of vulnerable populations and cultural organizations. 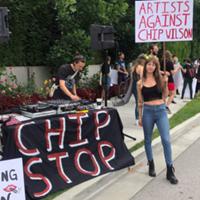 Second, the city needs to prevent more renovictions of arts organizations as it has attempted to do for residential renovictions. This means implementing a no-net-loss strategy for arts spaces, similar to the requirement for one-to-one replacement of residential rentals in the Grandview-Woodland community plan.

When a rezoning, development or building permit triggers the displacement of a cultural organization, city guidelines should ensure the developer is required to find an equivalent space and provide financial compensation for relocation and disruption. This is not unlike policies for residential tenants.

Finally, the best form of security of cultural spaces is when cultural organizations or the city owns the spaces. Vancouver can increase the cultural infrastructure grants budget, which already partially serves this purpose, but it can also pursue more innovative models of ownership, including cultural land trusts. San Francisco’s Community Arts Stabilization Trust and London’s Creative Land Trust both acquire real estate or long-term leases so arts nonprofits have permanent affordable homes.

These ideas are not new in Vancouver. There’s just been a lack of political will to act on them. 221A, a non-profit artist-run centre, has been advocating for a cultural land trust in Vancouver. Many of the other suggested protection strategies are also mentioned in the new Creative City strategy’s early findings report.

If the city was able to move quickly to give a festival with no track record $200,000, it should be able to move even faster to undo the harm it has caused and intervene swiftly to prevent more cultural organizations from being renovicted by predatory developers.