Artist Marianne Nicolson has had a big year.

The exhibition Hexsa’a̱m: To Be Here Always, co-created with Althea Thauberger, opened at UBC’s Morris and Helen Belkin Gallery in January.

In May, Nicolson was presented with the Emily Award, acknowledging her outstanding achievements as an alumna of Emily Carr University.

The project is part of Nicolson’s continuing efforts to merge art and activism. She approached the community about the idea of working together on the pictograph project and, after a few trips by boat through the territory, a site was chosen.

“It was considered important to place it further out as a physical expansion beyond the designated area of ‘reserves,’ which are minuscule compared to our actual territorial claims of usage and occupation,” she said. “The most compelling physical evidence which supports our claims are the white shell midden beaches created by the continual occupation of our people for thousands of years.”

The project began with a community workshop. Then participants headed to a campsite and made templates for their individual pictographs that would be placed on the cliff rising from the water. “We have kept a record of the images and their meanings for the community and for the future,” she Nicolson said.

Nicolson is an internationally celebrated artist whose work has been exhibited at the Vancouver Art Gallery, the National Museum of the American Indian in New York, Nuit Blanche in Toronto and the 17th Biennale of Sydney, Australia. In addition to her paintings, carvings, photographs and installations, she is an outspoken advocate for Indigenous land rights.

The Kwakwaka’wakw First Nations territory includes parts of northern Vancouver Island and the central coast affected by logging, fish farms and other development.

The Tyee spoke to Nicolson about her latest work and the issues that it represents. The interview has been lightly edited for length and clarity.

The Tyee: Can you talk about how the pictograph project came to be, and what you would like people to know about its intention and purpose?

Marianne Nicolson: This project grew as an extension of our protest actions as Musgamakw Dzawada’enuxw against the fish farms in our territory. It was recognized that we needed to follow up our articulation of assertion over our territory with occupation and presence. This needed to be done in a very visible and permanent way, so I proposed a community pictograph further out in the territory and close to the contested occupied spaces of the fish farms.

The struggle for Indigenous land and water rights has been going on for more than 100 years in Kingcome Inlet. Why it is even more critical now to bring this to greater public attention?

The damage that we are experiencing in the land has become amplified. At first, we witnessed the extensive damage inflicted by the logging, and now we are witnessing the damage caused by the fish farms. Our people can testify to the decline in fish abundance to catastrophic levels, brought on by the habitat destruction caused by both industries. Without the fish, the bears, eagles and other species that are reliant on them as a food source, are also suffering. For those living in the communities and closest to the land it has been difficult to witness.

Our desire to assert our jurisdiction over our territories is both an issue of justice — “How were these lands taken from us without our consent?” — and well-being — “How do we protect these lands from further destructive industrial actions?” Our desire is to reassert our jurisdiction over our territories so that we can start healing the land and have the capacity to do so.

The Musgamakw Dzawada’enuxw were the first to launch a lawsuit against the federal government over fish farm licences. Can you talk about the history of the lawsuit?

The Musgamakw Dzawada’enuxw were the ones who initially protested the fish farms by issuing eviction notices. I think this was in 2016 or 2017. They followed this up by ceremonially boarding the farms and performing a “cleansing.” The Musgamakw Dzawada’enuxw then organized a city-to-city protest, with demonstration from up-Island to Vancouver to rally attention and support from other nations as well as the general public. As a result of these actions, the new NDP government started a negotiation process. Eventually, the Dzawada’enuxw walked away from this process, because they were required to sign non-disclosure agreements. This form of closed negotiation was in direct contradiction to traditional governance protocols, which require leaders to consult with the community as part of the decision-making process.

The process the Dzawada’enuxw chose after feeling forced out of the negotiation process was litigation. It was identified that the litigation would have to include jurisdiction over land and water, since for the Dzawada’enuxw they’re inseparable. In the Canadian legal framework, this was unprecedented. The process was to assert jurisdiction and then to exercise it by actually being able to evict the fish farms. Our position was zero tolerance.

Art and activism often combine in your work, but scale is also important. Is it important to make art on a monumental basis so that the invisible becomes undeniable?

Yes, colonial processes have attempted to render Indigenous presence as invisible, inconsequential, assimilated into colonial norms, or obsolete. Monumental works exert undeniable presence. The process of getting our children out onto the land to make a joint political statement was an invaluable part of this process. The message was that we are still here and through our children will continue to be here until time immemorial. The power of their participation was palpable. We imagine that our children’s children will visit this site and remember what their parents did.

In the case of fish farms, the environmental impacts aren’t always as visible as clear-cut logging or other forms of environmental devastation. How do you make this clear?

We have been attempting to collaborate with scientists in the region to monitor fish abundance and bear health. We have also been attempting to use our art and culture as a way of educating the public to the issues we’re facing on the ground and in our territories.

As an act of political protest, as well as assertion of Indigenous presence in the Broughton Archipelago, pictographs have a long history. How important was the location for the new pictographs?

The location of the new pictograph is on a group of islands referred to as Lixi, but also known as Na’nawalakwe, or “Supernatural Ones.” It is covered in a shell midden so extensive and deep that the beaches are almost pure white. We wanted to combine this ancient presence with a modern presence and create a continuum. Also, the area is adjacent to a nearby fish farm. It was important that the new pictograph be placed further out in the territory than the large one located at the mouth of the Gwa’yi (Kingcome) River. In this way, it was symbolic of us re-occupying and actively moving outwards to reclaim our relationship with the land. The site is also nearer to our sister community of Gwayasdams (Gilford Island) so their youth were able to come and participate as well.

The images of traditional coppers and cows painted on Petley Point near Gwa’yi village tell the story of the Scow brothers, who bought cows from then Indian Agent William Halliday’s brother, potlatched and documented the event in pictographs in 1921. Do you see the new pictographs continuing this tradition? 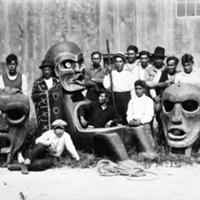 Yes, they are directly inspired by this prior protest action on the part of our ancestors, the Scow brothers.

Your own work Cliff Painting is also located close to the original pictographs on Kingcome Inlet. Do you feel a sense of continuity working with younger artists and community members in making this kind of work?

Yes, if feels even more powerful to have so many community members participate in creating a monumental pictograph. The direct action of painting on the land strengthened all of our connections both to each other and to past and future generations in this place. It was beautiful to witness the seriousness and intention of all the people involved in making this happen. This was amplified by camping at two traditional locations over a period of three days, so that the act of painting was mixed with time spent together on our ancient sites.