“I have a design for an art gallery at Larwill Park,” the late architect Bing Thom told Vancouver Sun journalist John Mackie in 2014.

“Gordon Campbell phoned me up and said ‘Paul Martin just gave me $500 million, design something spectacular at Larwill Park,’” Thom told the journalist.

Thom did design “something spectacular,” with a new art gallery floating over a public plaza, a theatre and other civic uses, beside the Queen Elizabeth Theatre.

And if our cultural leaders had more confidence in our own people and less need to elbow their way onto the global stage with some shiny object or the “next big thing,” we would be enjoying it today.

Instead, the Vancouver Art Gallery embarked on a disaster in the making, picking Swiss “starchitecture” firm Herzog & De Meuron. Its design for the new gallery, shown at the top of this story, expresses a facile interpretation of West Coast materials and forms fashioned into something that looks like the spawn of a ziggurat and a giant Transformer — a design that, for better or worse, increasingly seems fated to take its place in the catalogue of unbuilt Vancouver architecture.

If built, the gallery proposal will ultimately be forgettable, and feel private, lacking a substantive contribution to civic stature and public life.

What went wrong with this missed opportunity? The departure of Vancouver Art Gallery director Kathleen Bartels, who championed the project, provides a chance to reflect on what we are collectively doing wrong when it comes to key decisions about the future of this city.

Michael Heeney, who worked with Bing Thom for decades, told Mackie that Bartels was “very keen on having a stand-alone, iconic [building].”

The Bing Thom proposal “was more part of an ensemble” on the Larwill Park site across Cambie Street from the Queen Elizabeth Theatre, Heeney said. “Kathleen didn’t want to play ball. The next thing we knew, she was asking the city for the site.”

That, according to Heeney, cost the gallery the chance to be part of a fully funded mixed-use cultural centre that would have been completed in time for the 2010 Olympics. Instead, the gallery board opted for a stand-alone project that increasingly looks doomed.

It was seduced by the global flavour of the month Herzog & De Meuron, designers behind the Bird’s Nest stadium for the 2008 Beijing Olympics and the conversion of the Bankside Power Station into the Tate Modern in London, U.K. (And also the design leads for the Elbe Philharmonic concert hall project in Hamburg, which ended up costing 10 times more than the $100 million originally budgeted at a cool C$1.3 billion.)

Perhaps the kerfuffle at the gallery is an appropriate symbol for the tragedy of our city today. Vancouver is a city infatuated with itself, and its own pursuit of world-class stature. A place that has elevated money laundering to high art. A place with a precarious economy that is rigged to serve the appetites of the Vancouver Booster Class at the expense of those who want nothing more than to make a decent life for themselves in this difficult city.

Is this really us? Is this the architecture, or the city, we need?

An expression of societal values

Architecture is, at its best, able to speak in ways that elevate the finest of our common aspirations. At its worst it gives expression to our basest cultural ambitions of class distinction and greed. Which way are we trending?

Architecture tells us about our values, governance, economies, inventions, and how we care for each other. We are able to reflect, and appreciate, what a society’s “day in the life” experience means through buildings.

What does our architecture say about us now that early “Vancouverism” has had its day to be replaced by — what exactly?

Perhaps the newest entrant into the global city competition, Dubai, can give us a clue. The image below of Sheikh Zayed Road in Dubai has been described by Danish urbanist Jan Gehl as a row of over-sized “perfume bottles on a ladies vanity.”

Gehl also describes the popular process of “starchitects” being flown in to drop their buildings onto a city, with no regard for their impact on public life, as “Bird Shit Architecture.”

With the near completion of Danish starchitect Bjarke Ingels’ Vancouver House, and a host of similarly twisted, folded or mutilated tower forms in the planning or approvals stages, our city is confirming Gehl’s warnings about cities that embrace starchitecture and “complete indulgence of form, with no interest in function and day to day use.”

We rationalize the acceptance of each new “distinctive” condo tower as a necessary contribution to the city’s historically understated architectural image. We cannot be boring if we want to be world class. And the flow of global capital, legal or not, gives project budgets enough juice to express “specialness.”

Let’s not kid ourselves. Everyone is a victim (or beneficiary) of the development food chain. Higher and higher land costs pushed to stratospheric heights by global capital flows — crazy land costs expressed in physical form as twisted, folded, and bent architectural exteriors — affect the entire housing market, translating into higher rents and mortgages for all.

What does flaunting wealth in such a gauche way through the architecture we endorse say about us now? What will it say in 100 years? And is the obsession with shiny objects “good planning?”

Learning from our legacy

With all of this in mind, it might be a good moment to reflect on our distinguished legacy of West Coast Modernist architectural achievement. Arthur Erickson, Paul Merrick, Barry Downs, Fred Hollingsworth and others established a legacy of “honest” buildings for their time. Their collective efforts towards an authentic, inventive form were characterized by careful attention to the site and its prevailing landscape and ecology, the view from within, passively managing our distinctive conditions of light and air, use of local materials with refined detailing, careful application of ornament and colour.

Why not extend this place-specific tradition, adding more than a little humility and social purpose along the way? Why not produce architecture that speaks to inclusion within the fabric of the whole instead of the exclusion of class and wealth? This is our legacy, and quite the opposite of what we are doing now.

Future citizens will look at the changes we’re making, or allowing, and reflect on the question “Who were they?”

What will they think of us?

The design approaches described above are timeless, and continue to be reflected in the extraordinary efforts of Bing Thom’s former colleagues at Revery Architecture and many other Vancouver-based firms that have evolved from this West Coast Modernist lineage.

Instead of an architecture that is self-promotional, or reinforces housing as a commodity through aggressive “visual flavour of the month” buildings, might we re-visit our values to better reflect our aspirations for a society known for humanist ideals, fairness and compassion?

We’ll leave you with this brief history lesson. The image below is from the Queen Elizabeth Theatre competition held in 1955. 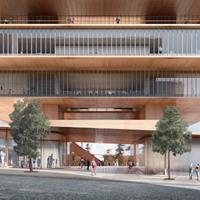 New Vancouver Art Gallery Design 'A Form that Can Be Controlled'

Architect Christopher Owtram’s submission earned honourable mention, not the actual commission, which went to a firm of Montreal architects. Yet it arguably best represented Vancouver “of this time and of this place.” It’s an overt and honest expression of the theatre’s internal programming and staging requirements, and engaged the public realm with a plaza interface that would have dramatically animated the site. The scheme is dynamic, exuberant and innovative. Some say photos of the architectural model toured Western Canada to fundraise for the project.

Why wasn’t this distinctive scheme built? Would Owtram’s proposal be appreciated today as timeless and honest architecture, reflecting our shared values and aspirations, while attentive to the lack of seasonal daylight? Would it be considered worthy of representing our dynamic, evolving coastal city with a profound relationship to nature?

We humbly suggest that we’ve lost the plot when it comes to the way we are building our city. Our fixation on building forms that shout to the world “Here we are! Launder your money here! Nobody in the middle class or (heaven forbid) the poor will be your neighbours!” helps no one and harms us all.

There is much to learn from our past when considering how all new buildings contribute to a larger civic image expressive of who we are: buildings that are of this city, of this time, of this climate, and with an expression that speaks to our collective citizenship, not to our likely future exile.