Reading John MacLachlan Gray’s great novel The White Angel, which delves into the intrigues of Vancouver after the First World War, I was struck by how similar the Vancouver depicted in the book resembles the city of today.

The mainstream media was a tool of the moneyed class.

Decisions were made to benefit those who already had most of the benefits.

And classes, parts of the city and ethnic groups seldom overlapped.

I was pondering this when trying to understand why changes that were clearly going to harm the most people in Vancouver were getting the most support, and things that would help the most people gained no traction at all.

John Gray sharply and acerbically portrays what I imagined, while I read, as the “Vancouver Booster Class.” A class too dumb to know that they weren’t smart, but with an unerring nose for where money would be found, and an unflagging assurance that what might be seen as avarice by some was in their own minds an admirable virtue. (Gray’s sharp portrait might have something to do with the fact that his novel is based on a true story, the murder of Janet Smith.)

What was most revealing in Gray’s book was the extent to which those self-congratulating members of the Booster Class were not always themselves rich, but were most frequently those who seemed to enjoy being swept along in the generous wake of the rich — the police chief, the journalist, the hotelier, the detective, the servant, the educator. They subtly, and not so subtly, adopted the attitudes of the Booster Class and expanded its number, until the opinions of this apparently leaderless group crushed any other opinions, indeed crushed what was moral or true under the dead weight of its odious podsnappery!

Now far be it from me to draw direct parallels with a time 100 years ago. But if one did, one could do a lot worse than to question how it is that during a year when the middle class and the working poor are so obviously being forced out of Vancouver, that our own Booster Class thinks it would be a great idea to go full steam ahead with the very same strategies that are making it all immeasurably worse.

This ignorance is manifested in many forms, but most dramatically in the broad Booster Class enthusiasm for the Vancouver real estate play of the century, a forest of new unaffordable condo towers proposed along the Broadway corridor, most notably at the Jericho Lands, the UBC golf course and at UBC itself. 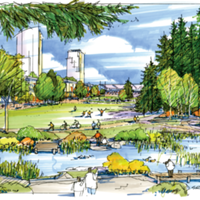 Subway to UBC? What No Mayoral Candidate Dares Say

The one thing we know with certainty is that these potential 15 million square feet of new condos will not sell for less than $1,200 a square foot.

You can just barely get a tiny two-bedroom unit into 700 square feet. That means it will cost you $840,000 to get into that baby.

Which is nice if you make over $200,000 a year, which is what you have to make for this to be affordable. And this is without a Jacuzzi and granite countertops!

So why are we building all this unaffordable housing? Why, it’s so we can rake off some of the development taxes to pay for the otherwise unnecessary, crazy expensive subway to make this real estate play viable!

And we can even use a land tax, (that should be used, if used at all, to make housing more affordable, not less) to put more bells and whistles on the Train to Boosterville, forcing everyone along the line to pay for the pleasure of creating a city their kids will be forced out of.

There was a time not so long ago when I thought, like a good academic, that if you just bring enough reason to an issue it would eventually win out.

But after a recent close brush with death and a revelatory reading of The White Angel, I see how foolish that was. Financial gain has ever and always been the game of the Booster Class. The faces may change but the engine of Boosterism is forever!

All hail the Vancouver Booster. Let no man stand in our way.