Four or five days a week, Jim Protasciewicz spends a patch of time at his perch atop the outdoor steps of the Vancouver Art Gallery, right in front of the building's ghostly, sealed-off former entrance, rolling his smokes in a neat cardboard tray fashioned from an expired lottery ticket. 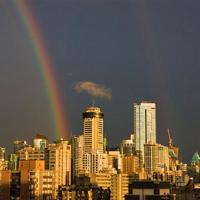 Asked a simple question -- how long has he lived in Vancouver -- he abruptly unspools his life story at a rapid-fire tempo: an epic tale of pain, misfortune, poverty, substance abuse and brushes with the law. Yet all the while he smiles and occasionally gently laughs. For here at this spot, the 54-year-old says he finds calm and contentment, watching the buskers and shoppers and gallery-goers and skateboarders and Hare Krishna troubadours and lunching office workers and everyone else in the urban theatre below him. "This," he says, "is the greatest view in the city."

So for now, the stellar public space in front of the Vancouver Art Gallery is Protasciewicz's second home. But if things proceed as planned, the VAG will move six blocks away, just north of the Vancouver Public Library. Protasciewicz won't move with it; he says he'll keep coming to the current site for his daily fix of people-watching.

When the Swiss architectural firm Herzog & de Meuron unveiled the future gallery's conceptual design late last month, it ignited debate over its form and cladding, but very little discussion about the future gallery's public space. Perhaps because, despite the fulsome promises of "public space" there isn't a lot of it in the Herzog & de Meuron design. What we are promised, actually, is semi-private courtyard space marketed as public space.

The VAG proposal offers a sheltered space that you don't have to pay to enter -- but you do, in most cases, have to plan to enter.

The gallery bills the design as an "open courtyard" with entrances facing all four surrounding streets. In response to a query from The Tyee, VAG communications officer Debra Zhou forwarded a statement outlining the design's goal: to create a vibrant space that welcomes diverse pedestrians and museum-goers.

Unlike the current city-regulated space, the new courtyard plan will be controlled by the gallery itself -- "for art installations, performances, concerts, film screenings, and collaborative programs with other cultural organizations as well as many of the same uses that take place on the current site."

The proposed space is surrounded on all corners by a one-storey wood and glass corridor, and divided inside by elevators, escalators and a rectangular sunken garden bed sprouting a row of trees. The design will ensure that the new VAG's outdoor area is "not just an in-between space but a space that has a form, that can be controlled," explained its main architect, Herzog & de Meuron principal Christine Binswanger, as she unveiled the design at the Queen Elizabeth Theatre last month.  She used words like "porous" and "permeable" to describe the wood and glass corridor, which functions as a perimeter wall.

Well, "porous" is a far cry from "open." For casual strollers along the adjacent streets, the VAG courtyard's perimeter wall proposes the architectural equivalent of someone turning their back on you.

"The onsite open space will effectively become privatized by this perimeter building," says Ralph Segal, who spent 23 years as the senior architect/planner with the City of Vancouver. "They might argue that because there are four axial access spaces, there is plenty of opportunity for the public to wander in casually or formally. But then to locate those access points away from [the building's] corners, you're away from pedestrians unless they're jaywalking." That's because with each of the four entrance openings situated in the middle of each block, pedestrians crossing at intersections won't be enticed to meander into the space.

What's more, on two of the three streets that surround the building, you have to descend a half-flight of steps from the street, a further discouragement of ad-hoc drop-ins or skate-ins.

"It's a lost opportunity," agrees Vancouver architect and developer Michael Geller of the future VAG's walled-in-courtyard proposal. "The idea of allowing the public open space to flow into the street would be a better solution than enclosing it." He thinks the entire wall along Cambie Street should be removed, to welcome the public and replicate the broad demographics that currently gather outside the VAG every day.

Geller appreciates how rare this phenomenon is: five years ago he publicly stated what developers and politicians tend to discuss sotto voce: that the market units of socially engineered housing projects are a hard sell unless they have separate entrances and elevators for the market and non-market units.

Geller was blasted for labelling each demographic with A to E lettering, a clumsy annotation that he immediately regretted, as it implied that the poorer groups were inferior. ("If only I had called the poor people As and the rich people Ds!" he now laments.) But the message, which Geller wasn't endorsing but simply communicating, is that rich people and poor people tend to annoy and avoid each other.

It's a lousy reality, but it's a Vancouver reality -- except in the remarkable case of the open outdoor spaces that surround the present VAG. Here, rich and poor rub shoulders sometimes literally as they all move around the space en route to the gallery entrance, or a busking spot, or Nordstrom's, or a chess game, or a UBC lecture, or just to cadge a smoke atop the regal stairway. It could be the sheer proximity of art that encourages this marvellous fusion of life. "Art galleries do tend to bring together all segments of the population," observes Geller.

Jim Protasciewicz, for instance, says he loves the "fashion show" offered largely by gallery visitors. Visitors to the gallery and its gift-shop in turn feel safe as they wend their way to the street-level entrance because of the sheer diversity of the crowd. One of my own favourite scents of the city is the air around the VAG, infused with a heady blend of high-end eau de parfum and mid-grade weed. Just as the mixed aroma of Gauloises and baguettes helps define Paris, I think of VAG air as part of Vancouver's unique character, the scent of urban harmony.

To attract the mixed demographics, the space has to be welcoming for them -- which can be as easy as leaving it open to and level with the street. Local architect and public-space champion Brian Wakelin of Public: Architecture + Communication is optimistic that the new VAG could become a great new public gathering space for all Vancouverites -- but only if the Queen Elizabeth Theatre site across the street is revamped and transformed into an open piazza to complement the new building. (The Herzog & de Meuron architects have suggested this, but it's not in the current mandate or budget.)

Wakelin, whose firm was awarded this year's Prix de Rome in Architecture for their plan to explore public spaces around the world, lauds European galleries like the Centre George Pompidou in Paris as ideals -- precisely because their open public space accommodates a mixture of all kinds of people, not just gallery-goers.

We are vaguely assured that no matter who moves into the current building, the buskers and and brown-baggers and protesters and kiosks and hangers-about can stay put. So does it matter if the new VAG's not-quite-public space leaves people like Jim Protasciewicz behind?

Yes, if you believe a flagship civic gallery should offer an overt public invitation to the entire spectrum of humanity -- including those with no intention of entering its hallowed corridors. Many artists at the VAG and elsewhere explore themes of alienation, social upheaval and protest in their light-box tableaus and video loops. But unsanctioned demonstrations won't happen in the future VAG's courtyard even if they were allowed, because it would be pointless to protest when concealed by a perimeter wall. Yet it's hard to imagine a more appropriate site to challenge the social or political status quo than in front of a flagship public art gallery. If we wish to honour, acknowledge and possibly even engage with our variegated humanity by way of the art that's inside the gallery walls, why shouldn't we welcome the same diverse population that is there in person, on the outside?

For Jim Protasciewicz, post-VAG life will be all right as long as he can still hang about on his stairway perch, and an ad hoc community that has come to serve as his extended family. "I come here because of the people," he says. "You get the people going, and they'll tell you everything."