[Editor's note: An updated and expanded edition of Briony Penn's bestselling collection of essays, "A Year on the Wild Side", is hitting shelves this year. In this B.C. classic, Penn documents the sprawling biodiversity that can be found on the West Coast, from orcas to moss to yes, even Bigfoot. “This is a self-help book posing as a field guide to the Salish Sea,” Penn says. We are proud to feature an excerpt from "A Year on the Wild Side" on the Tyee.]

I have such big feet that I spend winters in gumboots and summers in sandals. Dressing up means accessorizing with rubber wear. With my Mayan friends I was known as Nim Le Pai or Bigfoot. Fats Waller has little endorsement for colossal pedal extremities to the point of “I hate you ’cause your feet’s too big,” so I have a certain empathy for any creature that walks the earth with big feet. Here on Vancouver Island there have been over 100 sightings of such a creature or its footprints, and it is not me and my big feet. It is probably Sasquatch, and until another more plausible theory or a specimen turns up, I believe that what people are seeing is North America’s other primate. No one can completely discount the non-existence of an animal as long as evidence of sightings and tracks continue to come in; and they have been coming in for millennia.

The case for an open mind regarding Sasquatch started during a trip to Coldfish Lake in Spatsizi Plateau when I spent a fortnight with Dr. Jim Pojar, a renowned botanist and the author of an unpublished monograph, Plants of Sasquatch (as well as his popular Plants of Coastal British Columbia.) In 1992, Coldfish Lake was the scene of a sighting by two hunters who knew the megafauna well enough to know that this was no Grizzly scavenging at a moose kill. Spatsizi is full of things we don’t understand, and the possibility of another mammal there seems reasonable; after all, Western science only documented and collected the first specimen of the Pygmy Chimpanzee in 1929 in Zaire (now the Democratic Republic of Congo).

Pojar talked to me about the work of Dr. John Bindernagel, a wildlife biologist who has been consulting all over the world for the last 30 years, much of it for the United Nations. In the course of his work here in British Columbia, which routinely included gathering anecdotal accounts of wildlife like Grizzlies, Black Bears, etc., he had run up against an interesting phenomenon. Hunters, fishers, prospectors, guides, and villagers from remote communities routinely took him aside because he is a friendly, open-minded sort of guy at the end of the day and whispered in his ear, “I just wanted to ask you a question about something I saw a while back and I can’t explain it. It wasn’t a bear, I know what bears look like. It was big, wide, hairy, and looked like an ape. What could it be?” After 30 years and over 100 of these types of asides on Vancouver Island alone, anyone would begin to think it worthy of putting some scientific scrutiny to the subject. That is what Bindernagel did in his retirement, free from the constrictions of consulting. Denying the possibility of Sasquatch is a prerequisite for professional credibility.

It is no surprise that Bindernagel was cautious. British Columbia was a hotbed of bogus Sasquatch sightings and marketing. The controversial 16mm film of Sasquatch running away in an opening in the forest taken by Americans Roger Patterson and Bob Gimlin in 1967 flashed across people’s new colour tvs, sparking a whole era of apes selling everything from postcards to Pontiacs. It seemed a clever marketing gimmick invented by Premier W.A.C. Bennett to open up tourism. According to Bindernagel, legitimate eyewitness accounts clammed up for half a century, especially to the media. Plus there were hordes of hoaxers who put on plywood feet and monkey suits and trouped around romantic destinations where they hoped to attract tourist developments. The kitsch era of Sasquatch wannabees died with American hoaxer Ray Wallace, when his family members admitted that it had been him dressing up in monkey suits and fooling everyone up and down the coast since the Patterson film. 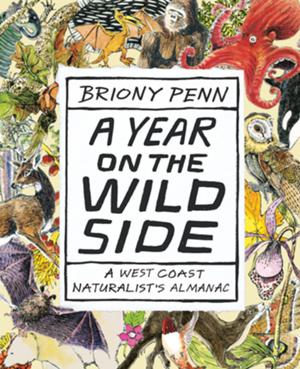 Cover of A year on the Wild Side.

Well that explains some of the fuzzy photos taken by townies on a Saturday afternoon in suburban Washington when Ray dropped in for a little fun, but how do you explain the eyewitness accounts of people who see an inexplicable large mammal at odd hours and in remote places from Hesquiat to Spatsizi? If it was Ray, he sure got around and knew just when to parachute himself into a rainy, remote piece of wilderness to surprise some poor fisher who would have been way happier seeing a 30 kilogram (60 pound) Spring Salmon in the creek than a 140 kilogram (300 pound) monkey on the shore.

I know for a certainty that it was not Ray Wallace who scared the daylights out of Bert Tom’s dog. Bert is a clam fisher from Opitsaht on Meares Island; he described to Bindernagel and me his sighting of a 2.5-metre (eight-foot) hairy creature with a flat sloping face and long arms raiding the village garbage dump. It was a month before Ray died, and this ape was no ailing primate. Bert himself is a quiet regular kind of guy that sees bears every day of the week. His dog typically barks at bears when he is in the bush. While Bert was out chopping wood near the dump, his dog suddenly ran back to the village, which made him wonder what the dog had seen. He walked up the boardwalk and there was an upright creature foraging in the dump. He had about a five-minute look at the back of the animal; then it turned, saw him, and fled.

Bert and his father, Eugene Charlie, took me to the dump to re-enact the scene. Eugene said that Opitsaht people have had many sightings over the years but no one talked about it because who would believe them. Nuu-chaal-nulth culture is full of references to wild ape-like creatures. And so are Haisla, Heiltsuk, Haida, Salish . . . the whole coast. Villages all have their own names and stories, and white guys have provided eyewitness accounts too! Even if I were to disregard several thousand years of traditional knowledge, I couldn’t disregard two salient facts: Bert is not someone I would even remotely describe as a marketing opportunist, nor was the Opitsaht garbage dump this century’s answer to Harrison Hot Springs. His only motivation for telling me was that he trusted Bindernagel to accept the information in the spirit in which it was given—a naturalist’s curiosity.

The first European naturalist to raise the question of another primate on the north Pacific coast was Georg Steller, the famous German naturalist. He described seeing a Sasquatch-esque creature foraging in the sea in 1741, which is a common thread in the thousands of sightings that have been reported. In the words of writer Corey Ford, “As trained and exact a scientist as Steller could scarcely have confused it with an otter or seal . . . the simple explanation is that the ‘sea monkey’ actually existed and that Steller saw it for the first and last time before it became extinct, like the northern sea cow, which he was the only naturalist ever to observe.”

It is not in the realm of impossibility that some primate other than humans is still out there, and I will stand among the ranks of eyewitnesses and their supporters that say that until there is a better theory put forward, Bigfoot is with us and Fats Waller can go to hell.