I live beside Kootenay Lake, on the toes of the Purcell Mountains. Once there were wolves, caribou and salmon here. Once the lake beside our farm was full of Kokanee fish, and as a girl I caught them and brought them home to my family for dinner.

Now there are none of these. Now when I go out at night, I sometimes hear coyotes. Occasionally I hear the odd chirrup chirrup of a hunting cougar. I know she is up on the mountain. I sometimes find deer kill, or the dog drags home part of a deer skeleton. I know the cougar sees me. I never see her. Maybe tracks, once or twice a winter.

But there are no wolves, and there should be wolves. This is their kind of country.

I am far from knowledgeable enough about wolves, although I have read what I can find. And if wolves returned to this ecosystem, I would rejoice. They belong here. But at the same time I would be worried, not so much worry about the wolves but about people’s reactions to them: fear, hate, sentimentality, all based on lack of knowledge, clarity and understanding.

I fear the splits and arguments it would bring to a quiet agricultural community, the macho “hunters” who might feel it is their job to rid the community of a problem. And I fear for the wolves themselves, for the snares, traps and poison that might be used.

Wolves still occasionally travel through. People tell me about it; they hear them, sometimes see them. But it is not a safe place for them largely because, since 2015, the B.C. government has been shooting them from helicopters in a failed effort to save the woodland caribou in the Selkirk and Purcell Mountains, as well as in other parts of B.C.

Despite criticism from wildlife biologists who say that woodland caribou need old growth forest to survive, the government has also issued further permits for clear-cut logging near land set aside as caribou habitat. “The B.C. government has approved dozens of new logging cut blocks in endangered mountain caribou critical habitat since May, conservation groups revealed,” writes Daniel J. Pearce in the Narwhal.

‘A beast of our imagination and experience’

As Paula Wild says, no one is neutral about wolves. They either hate them or love them. “The wolf that lopes across the human psyche is a beast of our imagination and experience,” she writes. “It is what we believe and want it to be: devil, werewolf, spiritual messenger, or legendary symbol of all that is wild and free. And yet its essence remains shrouded in a mist of speculation, fairy tales, rumours, righteousness and sometimes, truth.”

In a stellar effort to clear away some of mist, Wild, in her new book Return of the Wolf, has compiled an up-to-date examination of the state of wolves in the world.

She has amassed a comprehensive, accessible compendium of useful information about wolves, their history and behaviour, places where they’re intersecting with humans successfully and places where there is conflict. Much of her story involves wolves in B.C., and at a time when pitched battles rage between farmers, ranchers and conservationists, such information is definitely needed.

Wild’s tone is polite, clear and informative. She is not a biologist. She is not an expert. She is a writer, a journalist, doing what journalists do best: getting the whole story and presenting it with depth and clarity.

A book like this, that provides real, well-researched, carefully compiled information with a great list of other resources is a tool with which to encounter the mist of emotionalism, hate, fear, love and mysticism that clings to the subject of wolves.

Wherever wolves and people do share land, there are some obvious problems: livestock predation, occasional attacks on people, and the disappearance of small pets. One of these flashpoints right now is the on the west coast of Vancouver Island, where wolves have been showing up in bigger numbers, appearing on beaches and trails around Tofino and getting into occasional clashes with people.

Another flashpoint is ranching in B.C. and Alberta. But solutions to issues with ranching are appearing. For example, to protect her cattle and sheep Louise Liebenberg, who ranches in Northern Alberta and writes a blog about it, uses a combination of guardian dogs (her dogs, called Sarplaninacs are especially imported from Macedonia), electric sheep netting, indoor lambing and moving animals around. But it is her well-trained dogs, working in groups, which make all the difference. Liebenberg also writes a blog about her ranch and travels to teach people how to train and use livestock guardian dogs appropriately. 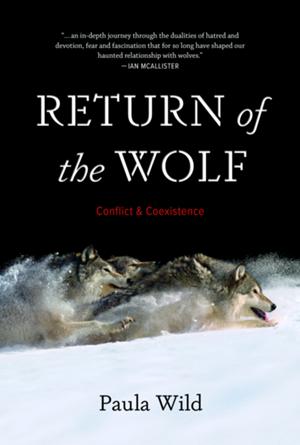 Wolves are also increasingly a presence in Europe, moving closer to cities and to people. Often, according to Wild, wildlife cameras catch the presence of wolves living unseen within cities and in farmland. Increasingly they are figuring out how to live with humans.

The question of the future might well become: can humans adapt to living with wolves? The example of the Bow Valley pack of wolves in Banff National Park is not comforting. Despite the best efforts of rangers to keep the tourists and wolves apart, a pack living near the Bow Valley Parkway became increasingly attracted to eating garbage, or being fed by tourists who wanted to get a great selfie. The pack, which consisted of a father, a mother, and four cubs, eventually became a nuisance. The wolves got into coolers, chased cyclists and got bolder.

As Wild writes, “In mid-2017, the pack was a nine-member family unit consisted of the breeding pair, three yearlings and four pups. By the end of the year, the two bold wolves had been euthanized, the pups had been run over by trains, and a two-year-old male was killed by a hunter. All that remained was the dominant male and one of his daughters.”

Undoubtedly there is much more to learn, study and understand about wolves. But for those who are curious, or confused, or worried, or angry, this book is a great starting point, another step on the long and difficult road to humans and non-human one day being able to share the planet. I was very glad to find it. Now I just have to get Wild’s book about cougars, so that I can perhaps better understand when the mother cougar chirrups to me from the mountain.