In an interview about the premiere of his film The Rules of the Game, legendary cineaste Jean Renoir told a story about watching an elderly man get out of his seat after the film was over, calmly light a rolled-up newspaper on fire, and proceed to try and burn down the theatre.

I thought about this as I watched Kidd Pivot/Electric Company Theatre's dance-hybrid production Betroffenheit on Friday night at the Vancouver Playhouse.

The point of Renoir's story is that seeing something truly new can be so upsetting that it invokes a strange kind of rage. There are similar stories about other seminal works of art that started riots in the aisles. The first time I watched Godard's film Weekend, I was so consumed with anger that it was virtually an out-of-body experience. I avoided Nouvelle Vague films for years.

Betroffenheit doesn't provoke this same species of rage but is a potent reminder that seeing something new is not always fun or pleasant.

But, and this is a big but, it is also why art matters. Not because it is entertaining or diverting or an escape, but because it is the only tool that can help when reality proves unbearable. It can allow you to turn and face the monster.

Betroffenheit came out of tragedy. In 2009, Electric Company co-founder Jonathon Young's teenage daughter and her two cousins died in a fire while the family was on holiday. I remember clearly the day that we heard the news. It was a normal work day, then there was a phone call, and then it wasn't normal anymore.

Everyone remembers where they were when they heard terrible news. The day the Twin Towers fell, or the Sandy Hook massacre happened, and suddenly the mundane business of emails and deadlines fades away. In these situations, language isn't of much use. But strangely enough, other forms of art making can embody what words cannot.

In all honesty, I've been avoiding seeing the production, partly out of some strange superstition but also because I didn't want to even think about what the loss of a child would feel like. The mind shies away from it, like turning from a white heat. But from the moment the show begins, there is no escape, no going around, no hiding under the covers, only going through to some new place.

Herein, Betroffenheit is an effective reminder that stagecraft can bear an uncanny resemblance to witchcraft. There is magic afoot here, but it is not gentle and it is not kind. This is clear from the moment the lights come up, and the first thing to move onstage is a thick line of cable, slithering across the floor like a fat black mamba. A little tickle of unease started up at the back of my head at this point and went slinking down my spine, one sibilant loop at a time. A part of me was thinking, "Let's get out of here, just get up and run out the theatre."

Betroffenheit is very much an original piece of work, but watching it you feel the ghostly presence of other pieces of culture. Strangely enough, I kept thinking about Stephen King, specifically the horrors of the mind and the capering gyrating darkness that boogies on down inside the locked cells of your frontal lobe. There are echoes of films like The Shining or IT, stories that exploit things both familiar and unfamiliar to burrow a hole deep inside your head and then set up camp there. Or, in the case of Betroffenheit, fashion a room, a place where the worst thing imaginable squats in semi-darkness.

The title of the work comes from a German word meaning a state of shock and grief so profound that it is paralytic. Here is where things begin, with a man (Young) locked inside a room. Inside this circular space, fragments of an unbearable experience shatter and then reassemble like fevered hallucinations in the form of tap-dancing ghouls and game-show hosts.

There is something also of the pop culture fatalism that marks King's best work present here. Children die, families are torn apart, and the thing just goes on and on and on, taking different forms and different faces but circling back around to remind you it is still there, the awful implacable thing. The clownish monster that eats children is less terrifying than the randomness of fate. Why did this happen? What could have been done? Why this person and not that one? Even worse is the perpetual question, What if? What if you'd been quick enough, or strong enough to stop the terrible thing from happening? The fraction of time between possible and irrevocable, that interstitial fragment when things hang in the balance. But life doesn't work like that and neither does death. It pops in like a touring circus, puts on a show and then leaves town, with only ragged streamers and a few balloons left behind.

So, what to do with this thing, this leering jabberwocky that burbles and burns?

That is the central question that Betroffenheit explores - the circularity of grief, how it turns like a snake, coiling back in on itself and wrapping around your body until you sink into the muscularity of the thing, let it squeeze the breath out of your lungs and take you down.

In this, dance can do things that other art forms cannot, namely express the inexpressible and give voice where language fails. All the coping mechanisms and therapy-speak do little. Addiction and drugs offer a different kind of carnival sideshow in the form of temporary oblivion. But at the bottom, in the basement of the mind where real darkness lies, it waits until all the tricks and the soft shoe shuffle falls away.

Betroffenheit chooses its symbols carefully, whether it's a dancer ape-walking across the stage or the presence of a large red box that could contain anything - a body, a bomb, or some leering demonic thing that comes sproinging out. The corporeal language of grief is carried deep in the body, but it also gives off a strange aura, almost like a smell. Some part of you registers this radioactive quality and a red warning light begins to flash inside your brain.

But, hope, in all its deer-legged fragility, is also present. So, as all the tawdry sideshow stuff falls away and there is only a bare stage, you kick off from the bottom and break for the surface once more.

DanceHouse's presentation of Betroffenheit is part of a final leg of a tour that will end in Montreal later this year. Most likely, the work will be staged again at some point, but for now it will live inside you, in your mind and your body.

The experience made me think about what the body is capable of enduring and expressing, but also what it means when the body no longer exists. The desire to create a simulacra of a person that you've lost, or relive a happy experience could be almost unbearably tempting for someone in a profound state of grief.

The advent of VR in dance is a relatively new thing, but increasingly, artists of all stripes are exploring the possibilities inherent in the technology. The NFB's production Tidal Traces, featured recently in The Vancouver International Women in Film Festival, is a curious melding of medium and content.

A 360-video VR piece from new media artist Nancy Lee and choreographer Emmalena Fredriksson, Tidal Traces employs technology to place you, the single audience member, in virtual situ with the performers as they run past you or materialize directly in front of your face. The conceit of the thing is interesting, recreate a dance performance on the tidal flats of Boundary Bay, play with perspective and scale, and offer an experience that wouldn't be possible in any other fashion. The work is pleasant enough, the sky, the sea and the pretty landscape are all enjoyable and the dancers are fun to watch. So what's the problem, you ask?

Simply, that it brings on a strange form of melancholy. Mourning for the real world, in all its prickly and rough discomforts, but also the idea that the image of a thing is as good, if not better, than the real thing.

The idea has popped up in film and television for quite a number of years, as deceased actors are digitally recreated, reanimated if you will, to fulfill their roles. The brilliant Charlie Brooker has explored the idea in a couple of different ways in his series Black Mirror.

With Spielberg's adaptation of Ready Player One hitting theatres in the coming weeks, the notion is in the air. Really in the air, since that is where reality lives at the moment, in the cloud. You can even hang out and dance in the world the film creates. The premise of Ready Player One is that the real world has fallen to ruin, and humans spend most of their time in a virtual space called OASIS, where anything is possible. (Weirdly enough, one of the film's penultimate moments involves an extended homage to The Shining.) 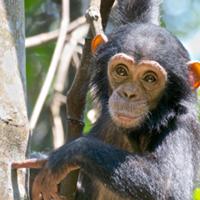 Before You Say You Hate Modern Dance, Think of the Chimpanzees

Early word on the film is that it is a grab bag of pop culture references all smooshed together into a Spielbergian VR smorgasbord of sentiment and action.

That sounds cool, but the actual experience of VR has been distinctly underwhelming thus far. No one has come out of a VR experience and tried to burn down the National Film Board of Canada. Yet... Mostly folks in VR headsets just bump into the furniture and look ridiculous. VR is also, for the most part, a very solitary experience between you and the images in front of your eyes. And, for something like dance, this is problematic.

The experience of watching Betroffenheit made me think not just about the nature of live performance, but also about how people need other people to help process the unbearable. Watching people stream out of the theatre after the show was over with tear-stained faces is another reminder of something that VR cannot do, namely bring all the humans together. Sometimes if feels oddly quaint, this idea that people still gather in large room with a stage and curtains to watch other people jump and leap about. But afterwards as we all sipped wine and said things like, "That was pretty emotional," one is reminded of why we do it and why it still works.

Dance can hold and contain a kind of bedrock truth: a veracity that lives in skin and bone and won't pretend to be anything but exactly what it is. And sometimes that is everything.