When Crown Prince Mohammed Bin Salman of Saudi Arabia launched his purge of the kingdom’s elite on Nov. 4, the world was shocked. He had been rising for several years, taking over more and more tasks (not to mention ousting his cousin to become heir to the throne). For a 32-year-old son of an 81-year-old monarch, he was doing pretty well.

Among other achievements, he launched Vision 2030, a program to strengthen Saudi Arabia’s economy and influence in the Muslim world. He promised a kinder, gentler Islam than the Wahhabi conservatism of the past; Saudi women will even be allowed to drive.

Prince Mohammed also launched a Saudi-led coalition in a war against the Houthi rebels in Yemen, which has so demolished the country’s health system and infrastructure that it is likely to see a million cholera cases by year’s end. The war is not going well for anyone, and neither is Prince Mohammed’s economic blockade of Qatar. 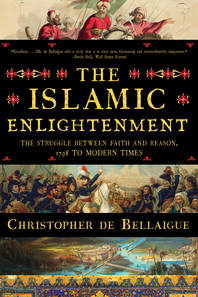 After almost a century of increasingly sclerotic rule, the House of Saud is due for ousting or an overhaul. But seen in the light of history, Crown Prince Mohammed’s palace coup looks like yet another doomed Islamic response to the challenge of the West.

Christopher De Bellaigue’s intellectual history of the past two centuries of challenge and response puts much of modern Middle East history in useful perspective. He begins with Napoleon’s invasion of Egypt in 1798 — likely the greatest shock to Islam since the destruction of Baghdad by the Mongols in the 13th century.

Islam in the late 18th century was a self-sufficient culture, like Qing China. The Ottoman Turks controlled much of it, and Muslims in general had little to do with peoples outside the Islamic world. The Turks and their subject peoples might fight or trade with the Franks (Europeans), but what went on in Europe was as irrelevant as politics in Paraguay might be to Canadians.

Then Napoleon arrived and conquered Egypt in a single battle lasting about an hour. He followed up the military shock with what might be called culture-shock therapy. His retinue included some brilliant scholars and scientists, who already knew far more about the Egyptians than the Egyptians knew about them.

Egypt’s finest scholars were, essentially, men who’d memorized the Quran as teenagers and coasted ever since. The idea of a printed Quran was bad enough; it implied enough copies for any Muslim to draw his or her conclusions from the Prophet’s text. But the French could also offer them the Quran in French. The Prophet’s words in any language but Arabic seemed worse than mere heresy.

Still, a few Egyptian intellectuals ventured into the French enclave to learn more and learned enough to establish a standard warning for their fellow believers: “These people rely on reason and inquiry, not revelation. They shot our best warriors out of their saddles. We need to learn from them, or they’ll overwhelm all Islam.”

Almost as soon as the French withdrew from Egypt after two short years, another standard response emerged: the Arab strongman-modernizer. Egypt was already a largely autonomous province of the Ottoman Empire, and now an Albanian-born dictator, Muhammad Ali, quickly set the pattern for 200 of Islam’s most wretched years.

Muhammad Ali sent a cadre of bright young men to Europe to study in Europe. They were predictably amazed but learned a lot and returned to give him advice — which he rejected, saying “I’m the one who governs here.”

Henceforth, Arab, Turkish and Persian strongmen-modernizers would cherry-pick Western culture; they liked Western-style armies, secret police and luxury goods. The vast majority of their people went on living and worshipping as they always had, made a bit more miserable by paying for their masters’ indulgences.

De Bellaigue shows how this theme became a kind of Bach fugue: shove Islam to the background, let a dictator ape Western culture and go broke, then let the West move in and take control of taxes and customs (and eventually oil) to pay off the debt.

By the early 20th century, this pattern had recurred so often that, as De Bellaigue describes, Japan’s bludgeoning of Russia in the Russo-Japanese War was a counter-shock: an Asian nation could beat the Europeans. What he doesn’t mention is that Ulysses S. Grant, on a world tour after his presidency, advised the Japanese never to borrow from the West, and cited a recent ruinous loan made by Britain and other European nations to Egypt. The Japanese followed his advice.

But the Muslim world was too deeply in hock — and too deeply conflicted — to escape. Western-educated Muslims came home to work in one top-down revolution or another, but “modernization” continued to be defined by the secular strongmen: strong armies and police forces, Western-style education for a few, and repression of the reactionary imams.

There were flickers of hope: parliamentary democracy and a constitutional monarchy actually seemed within Iran’s grasp early in the 20th century, then died under Russian and British pressure and the rise of yet another strongman. But the vast majority of Muslims saw European-style democracy as an imperialist divide-and-rule gimmick.

De Bellaigue traces the Islamic Counter-Enlightenment to one man, Sayyid Qutb. An Egyptian bureaucrat, he went to the U.S. in the 1940s for advanced education and was appalled by U.S. culture. His predecessors had gone to the West and come home to try to impose Western ideas; Qutb wanted Islam to reject the West altogether.

This did not go over well in the 1950s Egypt ruled by secular strongman Gamal Abdel Nasser, and Qutb was hanged in 1964. That was the true birth of “Islamism” as an extreme repudiation of the West and secular politics. Qutb’s ideas inspired a new militancy in the Muslim Brotherhood: it was a member of the Brotherhood who assassinated President Anwar Sadat in 1981. This in turn led to an ongoing war between Islamism and secularism in the Muslim world.

As De Bellaigue notes, Islamism realized it was already riddled with Western ideas. The Iranian Islamist revolution of 1979 sparked no fires elsewhere in the Muslim world; it was a national revolution, with an elected parliament. And the Islamist fighters who came home from Afghanistan ran into trouble from their secular governments — and even from the Saudi government, whose Wahhabism wasn’t quite as severe as Al-Qaeda’s.

After systematically exploiting and colonizing the Muslim lands for centuries, the West remains as ignorant about Islam and its believers as Islam was about the West before Napoleon. Especially since 9/11, we’ve defined a billion believers by the views and actions of a tiny splinter group.

We continue to define “good guys” as Muslims who cooperate with us and “bad guys” as those who don’t. The idea that an Islamic state is just another, equally valid way of living simply doesn’t register with us. Having messed with Iran for long over a century, for example, we’re then scandalized when Shia theocrats repudiate us and start building nuclear weapons to deter us from messing with them some more.

De Bellaigue offers no solutions, only insights the West should have understood even before Napoleon. The Islamic Enlightenment is far from over, but its current civil war with its adversaries will continue for the predictable future — and with a West that refuses to recognize or respect any Enlightenment but its own.

Meanwhile Saudi Arabia, which largely ignored the Islamic Enlightenment, is now clumsily repeating it, with a dynastic prince asserting the strongman-modernizer’s role. Judging from the fate of his predecessors, he will not succeed.