[Editor's note: Wednesday night, Haida Gwaii: On the Edge of the Word won Vancouver Film Critics Circle awards for best Canadian documentary and best B.C. film. Director Charles Wilkinson also won best director of a B.C. film. This review is from Hakai Magazine, an online publication about science and society in coastal ecosystems. Read more stories like this at HakaiMagazine.com.]

Haida Gwaii is a place of giant western red cedars and towering Sitka spruce. Carved poles stand over the villages, and people sing ancient songs throughout summer feast season. On this archipelago of 150-plus islands, located approximately 100 kilometres off British Columbia's north coast, the bounty of the Pacific -- kelp, salmon, crab, and herring -- sustains the residents. 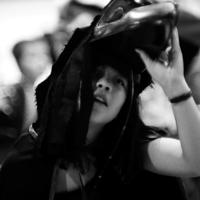 We Gathered to Say Haw'aa

By popular demand, 'On the Edge of the World' will be showing at the following theatres:

But the millennia-old charms of Haida Gwaii were almost relegated to memory.

By the 1980s, unsustainable logging practices were damaging the old-growth forests and important cultural sites, while profits flowed away from the island. So Haida Gwaii's inhabitants -- members of the Haida Nation and non-Haida alike -- pushed back against industrial forces, staging protests such as the well-publicized Lyell Island blockade, in which they stood in front of logging trucks. It worked.

Today, the southern half of Haida Gwaii is protected via the Gwaii Haanas National Park Reserve, National Marine Conservation Area Reserve, and Haida Heritage Site, co-managed by both indigenous and Parks Canada folk. These efforts to protect the islands are the subject of Canadian director Charles Wilkinson's latest documentary, On the Edge of the World.

Filming between 2011 and 2015, Wilkinson spent weeks at a time on Haida Gwaii, interviewing a wide cross section of residents about their efforts. They included a former president of the Haida Nation, Guujaaw; Guujaaw's son, Jaalen Edenshaw, a traditional Haida carver; as well as fishermen, loggers, scientists, artists, activists, and hereditary leaders.

Hereditary chief Allan Wilson captures the essence of the film in an opening soliloquy: "People from other countries are coming here to see what we're doing... How do you fight your governments and corporations over this land? How do you fight over the water? How come your nation is so small and yet you're able to do all of these things? How are you winning?"

Wilkinson bookends the interviews with Haida Gwaii landscapes -- aerial and ground-level shots of calm, islet-studded bays and beaches bordered by dense forests where bald eagle aeries dot the treetops. These iconic landscapes powerfully show what the people were fighting for. Anyone who loves forests or the Pacific Ocean, or who has fought to protect both, will find this well-paced, 90-minute film appealing.

In an email interview in August, Wilkinson says he recently screened the film for the first time on Haida Gwaii itself: "The response was overwhelming. Prolonged standing ovation, cheers, and tears." On the Edge of the World won the Best Canadian Feature Documentary Award at Toronto's Hot Docs in spring 2015, and Most Popular Canadian Documentary at the Vancouver International Film Festival. It premiered in the United States at the Margaret Mead Film Festival in October 2015.

Haida Gwaii: On the Edge of the World plays at the Rio Theatre in Vancouver Saturday, Jan. 23 at 3:30 p.m., followed by a Q&A with director Charles Wilkinson. Details here.