The impending arrival of an estimated 2,800 Syrian asylum-seekers into B.C., part of the federal government's promise to resettle 25,000 by Jan. 1, has raised anxieties over both security screening and whether community services can cope. 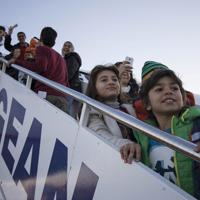 Why Canada Can Safely Meet Its Refugee Commitments

But for artists who themselves migrated to Canada from abroad, the question isn't whether we should help the newcomers -- but how.

"You cannot just sit still when others are in pain or don't have enough to eat," said Hoda Zakaria, a Surrey painter originally from Egypt. "We should all try to help others."

When Zakaria arrived in Canada, she recalled that "people were from all parts of the world." That diversity of experiences has taught her a lot, she said.

"They're refugees -- we're going to learn a lot from them," she said. "We'll learn what they have been through and what they feel about what's happening in their country. But we should also learn from them how they've stood against difficult situations in their life."

Zakaria is one of 17 artists of immigrant backgrounds to be featured at a Surrey art event tonight that will raise funds for local refugee services and support migrant artists.

Organized by DIVERSEcity Community Resources Society, the evening fundraiser and exhibition is one way that nonprofit groups are preparing for the refugee wave. Tahzeem Kassam, the organization's chief operating officer, expects that up to one-third of the Syrians who come to B.C. will be settled in Surrey, as it's a diverse community that has welcomed a high number of refugees before.

Help will be returned

Responding to the refugee crisis, DIVERSEcity has also launched a Gofundme campaign to raise money for supporting asylum-seekers once they're here. The fund will support the organization's refugee services, and spent on medical supplies, housing assistance, diapers, clothing, public transit expenses and possibly expanding programs offered to refugees.

"I can tell you we feel kind of tapped," Kassam said. "In Surrey, language programs have wait lists pushing a year in some cases. We know there are service capacity issues that would not be able to absorb this number of clients." 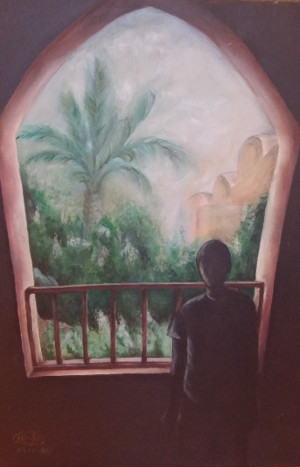 'The Beauty of Contrast' by Egyptian-Canadian painter Hoda Zakaria.

Nevertheless, she's heartened by a federal promise of $100 million earmarked for settling the sudden influx of asylum-seekers. Even if that isn't enough to ramp up services quickly enough, Kassam is confident the nonprofit sector can step up.

With the anticipation of a "huge" number of refugees coming in a very short period of time, Kassam added, "we're going to need to respond to them in a relatively quick manner."

She described it as the largest single refugee movement to Canada in decades, at least since the Southeast Asian exodus during the Vietnam War. Canada took in nearly 265,000 refugees from 2005 to 2014.

Kassam acknowledged that some Canadians are anxious about the security screening process for refugees, calling it "natural" when there's a "vacuum of information or clarity" around how the government plans to conduct the screenings.

"It might feel like it's overwhelming," she said. "[But] it would be nice if we could take a breath, step back, and look at this as a unique scenario. I don't think anybody is going to bring anyone here without any type of screening."

Zakaria said she's heard on the news some Canadians' fears about terrorists sneaking into the country with genuine refugees. However, that's not her experience of Canadians.

"I don't think Canadians are really afraid," she said. "Maybe some are, but most of them are welcoming and helpful. My Canadian friend who is also making artwork donated every single dollar she earned to Syrian refugees. They will appreciate the help and one day will return it back."