Whether we like this book or not, and whether we read it or not, Thomas Piketty's Capital is going to dominate our debates and influence our lives as few have since Karl Marx's book of the same title. Milton Friedman and Richard Nixon both famously said, "We are all Keynesians now." For the foreseeable future, we are all Pikettists. 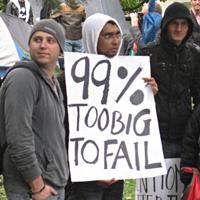 The Forgotten Prophets of the Occupiers

MUCH ADO ABOUT PIKETTY

Will Hutton, The Guardian. "Capitalism simply isn't working and here are the reasons why."

It's charmingly ironic that a 696-page book, with graphs and charts on almost every page, and rich in technical jargon, should itself become a market success: Amazon reports it as the best seller in its field, and it's also temporarily out of stock. The #Piketty hashtag is an aviary of nonstop tweets.

The media have responded to Piketty with shock and awe. Predictably, the right-wing pundits have blogged and tweeted against him, but their arguments don't get beyond moans of "repackaged Marxism." On the left, pundits echo Alexander Pope, saying in effect that Capital is "what oft was thought, but ne'er so well expressed."

Or so well documented. Arguing with Piketty (pronounced peek-a-TEE) is like arguing with a really tough tax auditor, and for the same reason: He is a forensic economist, following the money all the way down to the French Revolution and all the way back up to 2014 -- and even 2100.

I'll leave it to the Krugmans and Galbraiths to parse the finer points of Piketty's argument. What I take away is this: We are playing in a rigged game. The deck has always been stacked against us, and against our parents and grandparents, world without end. Why? Return on investment has always been higher than economic growth, and you can live well on just a fraction of that return while saving the rest for your offspring to inherit. They in turn will build the family wealth still more, Piketty explains. This is patrimonial capitalism, and it has nothing to do with education, skill or hard work -- only with whose legs you happen to have been born between.

For the bottom half of the population, he writes, "The very notions of wealth and capital are relatively abstract. For millions of people, 'wealth' amounts to little more than a few weeks' wages in a checking account or low-interest savings account, a car, and a few pieces of furniture. The inescapable reality is this: wealth is so concentrated that a large segment of society is virtually unaware of its existence."

The only exception to this rigged game, in Piketty's view, was the catastrophic 30 years between 1914 and 1945. In that period, Europe's megarich one per cent took brutal capital losses: overseas colonies broke away, factories were bombed, and their fortunes were taxed to support both wars and politically needed social services.

A golden age for some

Those of us who grew up middle-class in the next 30 years, from 1945 to 1975, recall it as a golden age of cheap education and housing, with plenty of secure jobs. Income inequality was relatively low, and public health and life expectancy were improving. For the first time in history, the middle class (defined by Piketty as the 40 per cent just below the top 10 per cent) actually acquired a little capital, if only in the form of home ownership. For the lower 50 per cent, nothing has really changed; they own no more than five per cent of any nation's wealth.

This was also the situation in 19th century, when the owners of land and factories in Europe were rich and the slave owners of the American South were even richer. Rising wealth culminated in the "Belle Époque" of 1880-1914. By 1910, the top one per cent held over 60 per cent of Europe's wealth. They seemed to have no idea of what lay ahead of them, right up until the guns of August began firing.

Now we are in the modern Belle Époque. The American one per cent is almost exactly where the French and British one per cent was in the spring of 1914. Piketty projects current trends to 2100 and foresees private wealth returning to 1800 levels with a four or five per cent return on capital. Meanwhile, growth of world output will sink back to 1.5 per cent -- about where it was in the mid-19th century. Is that inevitable?

Marx had predicted that capitalism could resolve its inner contradictions in one of two ways: either be overthrown by its workers when they realized how badly they'd been robbed, or tear itself to pieces as capitalist nations fought for control of markets. (After 1914, we got both.) Is that what we face again?

Piketty sees a possible alternative: a worldwide universal, progressive tax regime. It would have to be worldwide to prevent the megarich from squirrelling their money away in the Cayman Islands or some other tax haven. (He suspects a lot more has already been hidden than anyone realizes.) This taxation wouldn't impoverish the one per cent, but it would give governments a better sense of just how rich everyone is -- and isn't. He suggests such a tax regime could begin regionally and eventually spread worldwide.

But that's just one economist's opinion. The rest of us, finally armed with Piketty's data, need to start debating what to do about the rich and the poor. We don't want a war to equalize matters, and revolutions tend to end badly.

But we need to make the one per cent understand that every dollar, pound and euro they make ultimately comes from the elaborate infrastructure the rest of us have created. They only exploit it. They are not the job creators; we are the wealth creators. They have no more right to a free lunch than we do, and high incomes warrant high taxes.

The right will certainly resist Piketty to the bitter end, but now we know the cards are stacked against us. We owe ourselves not just a new deal, but an entirely new deck of cards -- and a new dealer.