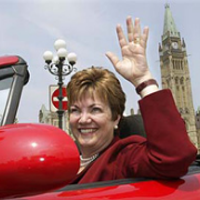 The veteran publisher and chairman insists that every success of the West Coast publishing house is a shared effort, and is careful to sing the praises of his colleagues. It's been a big 40 years.

"We didn't go rapaciously out there to build an empire," McIntyre says. "We've always put the books first."

In 1971, a "truly young and idealistic" McIntyre, together with partner Jim Douglas, published his first title. Since then, D&M's picked up three imprints, created various partnerships, and, as of late, cranked out over a 100 books a year.

Anna Porter, McIntyre's former colleague and competitor who now publishes her own books with D&M, remembers McIntyre's earlier days in her November Quill & Quire essay "King of the Independents."

"No one else at that time could have published Chuck Davis's Guide to Vancouver, or the beautiful photography book The Unknown Island -- a vast, risky investment for any publisher, but it paid off," she writes.

Then came the digital revolution. The advancement of ebooks slammed the publishing industry; some publishers adjusted, others are still soul-searching.

For its part, D&M jumped on the digital wave, now publishing digital versions of almost every new title. "My own view is ebooks are the new mass paperbacks," McIntyre says. But as digital director Jesse Finkelstein adds, it's still difficult to predict what ebook sales are going to look like. "We're trying our best, but it's still really early days."

Now, it's all about the publishing miracles, and D&M's had its share. In 2010, the publisher won the right to print surprise Giller winner The Sentimentalists in paperback, when small press Gaspereau couldn't print it fast enough -- a boon McIntyre says "transformed the year."

Still, there's no question that publishing, known to some as "the perilous trade," has entered a murky new era. McIntyre recently told the Vancouver Sun that he's never seen things change in his industry as fast as they are now.

But far from over-the-hill cynicism, McIntyre seems okay with the fact that nobody has any idea where it's headed.

"The publishing gods smile occasionally... that's the drug of publishing" he says in one of several videos produced for D&M's birthday. (In one impressive montage, he casually rattles off the number of copies sold for a stack of D&M books. "His sales rep days die hard," the caption quips.)

Here's more from the self-proclaimed "last of the dinosaurs," on the story of publishing and its as-yet-to-be-determined conclusion:

On the joys and woes of publishing in Vancouver:

"It was better in the 1970s, because relatively more was happening here, the local media (such as the Vancouver Sun and such open line shows as Webster) were truly dominant, and British Columbia had the best independent bookstores in the country. Many of them, one in virtually every town of any size in the province. These were the glory days of Canadian publishing, when Canadians seemed to want to know about their country, and books from our icons (Peter Gzowski, Farley Mowat, Pierre Berton, Peter Newman, Mordecai Richler, Margaret Laurence) were having a reach and success unheard of until then. There was a market base in this province which has sadly diminished since then. On the good news side, we still have wonderful writers, but increasingly the good ones have Toronto or New York agents, and at the end of the day it is all about the money, which means that the multinationals will win almost every time.

"Vancouver is less and less important in the world of book publishing, although B.C. publishing is still relatively more important on the national stage than a second city is to the publishing scene in any other major country. And it remains a magnificent place to live, and to have raised a family. The psychic distance provide by Vancouver's physical distance from the centre has also always been wonderfully refreshing to the creative mind, which is why there are so many writers, new media people, and artists here.

"In a digital world, 'place' becomes almost irrelevant in a business sense, although ever more important in a cultural sense. One of the good things about Vancouver is that, on the international stage, it is by far the 'sexiest' Canadian city, in effect a city-state, so that we have real cache in New York, Paris, and London, let alone in Shanghai, Beijing or Taipei -- probably more than Toronto does. That is changing as Toronto ever more feels its oats, and the sheer scale of its cultural industries and cultural institutions means that power is ever more centralized there, at least insofar as the traditional media in English Canada are concerned.

"The government of Ontario has also discovered the importance of the cultural industries, and come up with good new (and well-financed) programs, something which consistently seems to elude the government of British Columbia."

On the accelerated rate-of-change in publishing:

"I mean, Borders is gone... and Chapters is moving out of books into barbecues and tchotchkes. And they claim they're not really going to do that, but I think with the growth of ebooks, the old model of real estate is over.

"Jason Epstein, a great editor at Random House, co-founder of the New York Review of Books, wrote a very wise book about publishing, pointing out that it's always been a cottage industry. This whole infrastructure of pumping out bestsellers, getting the wallpaper in the superstores, taking returns that are about 50 per cent -- it's always been a flawed model. But now, with ebooks, you don't have to do that.

"Everything's supposed to be free, anybody can post anything on the Internet, anybody can make a book... [but] what happens to the curatorial instinct? What happens to editing? The traditional value of publishers is, they add value. You take intellectual property, you add value to it, and you distribute it and market it. But essentially, it's still about editing. It's about storytellers telling stories, and readers wanting them."

On what the 'perilous' industry needs most:

"Other than a lot of money? There's no magic answer. It needs writers and it needs readers. It's the folk in the middle that are adapting to very uncertain times. With ebooks, technically, digital distribution is cheap. It works for everybody except the bookstores.

"I mean, look at Amazon and Kindle, you want anything, it's right there. Plunk a button and it's in your machine. One could argue that that will expand the market, not necessarily diminish it. But it will change it."

"[Publishing] needs more working capital than it has, there's nothing new about that. And the models are changing. There's a new start-up in New York, great guy, worked for a couple of traditional publishing houses. They take everything to a PDF. They edit, design. You pay cash upfront and you order the book and it's printed for you. Print-on-demand. But it's a real book with real editing and real design. So I think the models will change."

On pulling rabbits out of hats:

"We have had our share of publishing miracles. Rabbits out of hats, I call them. [The Sentimentalists] was one... We were having a tough year. It just transformed the year. That was a sheer combination of luck, and being around. As Woody Allen says, '90 per cent of life is showing up.' This was just a wonderfully happy combination of circumstances. And nobody expected it."

On the future wild west of publishing:

"There's an apocryphal story that the first book Gutenberg ever published was the bible. The second book he published was a screed on the death of publishing. It's a dysfunctional business, on paper. But people want to read stories, and thank God, people want to write. And good publishing will find its niche. It will morph. I think it will be smaller. And ebooks could conquer all.

"Writing isn't going away. Readers want real books. The trick is what's the in-between? I think increasingly, between ebooks or even publishers distributing themselves, generally speaking, you're going to see a diminishment of the old physical apparatus of book distribution and selling.

"It's like Hollywood, with fewer zeroes. It's about the money. How do you publish around that? You get wonderful editors doing wonderful books, but those books are going to sell 2,000 copies, not 100,000 copies. And how do you build a business model out of that? Nobody has a clue. It's the wild west."