Peter Steele doesn't think much of the modern Everest-climbing industry. "They're just pulling themselves up on ropes other people have put up for them." 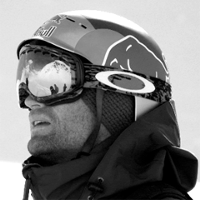 It was a lot different in 1971, when Steele was the doctor on an ill-fated Everest expedition. One team member died, others suffered altitude sickness and glandular fever -- and the climbers didn't reach the summit.

The adventure was, however, typical of Steele's remarkable life: For over 40 years he's gone into remote regions, paid close attention to his surroundings, and come back to write about what he's learned. In the process, he's built a remarkable body of very good books, often about people like himself who have devoted their lives to exploration. And, in his mid-70s, he still intends to do a lot more writing, as he made clear in a recent interview with The Tyee at his home in Whitehorse.

As a boy in Britain, Steele took a course at Outward Bound Mountain School when the Warden was Eric Shipton, a famous explorer and mountaineer. Shipton had led a reconnaissance of Everest in the early 1950s that brought New Zealand beekeeper Edmund Hillary into the team; Hillary and Tenzing Norgay became the first men to the summit. Steele and Shipton would later become friends, and Steele would become his biographer.

Long before then, however, Steele completed medical school and expected to become a surgeon like his father. A 1962 stint doing medicine in Nepal gave him an interest in the Himalayas and their peoples. Then in 1967 the King of Bhutan invited him to conduct a medical survey in that remote and seldom-visited country.

Steele agreed -- and took his wife and two small children with him. They had to get into the country, and across it, by pony and on foot. He learned about endemic goitre, the purpose of his study, but also about Bhutanese archery, food, and society. Two and Two Halves to Bhutan, his 1970 book about the journey, succeeds on many levels: as family memoir, as travel story, and as anthropology.

The highest hospital in the world

In 1971 he served as doctor to an expedition hoping to ascend Everest by the Southwest face. It turned into a series of disasters, mostly due to unlucky weather, and Steele was in the middle of them. With a limited medical kit, he set up the world's highest hospital at the expedition's base camp -- built in a day with boulders for walls and polyethylene sheets for a roof.

In his weeks on Everest, Steele contended with a host of ailments and injuries, many of them caused by the high altitude: climbers form more red blood cells to compensate for the lack of oxygen, but this in turn can lead to clots, edema, and even strokes. But he also saw men operating under extreme stress -- psychological as well as physical -- and sometimes losing their tempers or making dangerous errors in judgment.

The experience bonded him for life with the team. On a recent visit to Britain, Steele met with some of the surviving members. "Extraordinary people," he called them.

Steele wrote a gripping account of his experiences in the book Doctor on Everest. Everest also sent him wandering again. He hitch-hiked around South America with his son, then ten years old, and wrote a "very bad novel."

Then, visiting a doctor friend in Whitehorse, he was offered a partnership in a local medical practice. He and his wife Sarah decided to try it for a year or two, "and then move someplace more civilized."

Instead they stayed in Whitehorse. "The kids liked it, and we loved the cross-country skiing." They also fell in love with Atlin, a couple of hours' drive south. The site of B.C.'s last gold rush is a small village in a spectacular setting. The Steeles found a cabin, rebuilt it, and made it a second home. (The kids' bunk beds were surrounded with bookshelves, making them ideal nests for reading on cold nights.) It was a good base for rock-climbing expeditions and sailboat cruises on Atlin Lake -- the largest natural lake in B.C.

Steele turned the cabin into the basis of another book, Atlin's Gold, which merged his family's adventures with a history of the town and its region. It ranks among the best of B.C.'s many regional histories. He also wrote a Backcountry Medical Guide, combining his professional and recreational interests.

Clearly, Steele's great theme is the explorer far from home, in beautiful but dangerous and unknown country. In his two most recent books he's moved even deeper into that theme.

Eric Shipton: Everest & Beyond is a fascinating biography of a major mountaineer who was also a complex man: a dyslexic who became a prolific author, a mountaineer more at home on Patagonian glaciers than in modern cities, and more at ease with Sherpas than with his own children. Steele is sympathetic to his friend and mentor, but does not shrink from dealing with Shipton's many personal lapses.

Steele's most recent book, The Man Who Mapped the Arctic, concerns George Back, who served with Sir John Franklin but fortunately didn't go on Franklin's last expedition.

Back turns out to be a wonderful subject, who started his naval career as a teenage POW in Napoleon's France -- five lovely years under very light supervision, free to drink in bars and pick up girls. But he then returned to the study of navigation and other subjects, equipping himself for post-war life in the Royal Navy. Repatriated to Britain, he began to build a career that culminated in several years of Canadian travel by canoe and snowshoe on Franklin's first trips into the Arctic. Back retired as an admiral, famous and admired.

Steele flew across the north, retracing Back's journeys as part of his research, so his account vividly describes the terrain Back himself struggled to cross. And Steele's medical and outdoor experience enabled him to convey the difficulties of exploring Canada in the mid-19th century. (Back endured almost everything without complaint except the mosquitoes.)

Now in his eighth decade, Peter Steele is looking for another book project. Most of the people and events of the Yukon, he says, have been taken. He's been working on a personal memoir, but doubts that any Canadian publisher would be interested.

In that, he may be mistaken. His own life is a superb example of his theme: The explorer, far from home, who makes a new home in a forbidding but beautiful place.