Last week I was sitting in Academy Duello, watching a bunch of tweens shoot arrows at a target. In addition to the mechanics of how to actually shoot a bow and arrow, the instructor gave the kids a brief lesson in the history of weaponry. 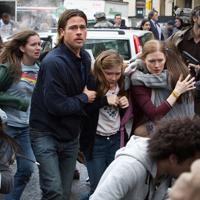 The world she described was, as Thomas Hobbes quipped, "nasty, brutish and short." It sounded horrible and it sounded great. The fact that not so long ago, human existence was very harsh stuck to my mind like a burr.

Growth, progress, development: initially those concepts seemed like good things, touchstones on the perpetual march forth into a more civilized world. But something has gone a bit wonky as of late.

There are floods of biblical proportions, firestorms, explosions, and horrendous things aplenty, but the one thing that convinced me that the end time is nigh is the release of Grown Ups 2.

The first film was a bloated sack of puerile sexist jokes, and moronic Adam Sandler bits. Someone termed it a "non-movie", which is a perfect summation of its bone-lazy boneheadedness. But the first iteration of Grown Ups made money (a lot of it) so now there is another one. Maybe it's time to pack up and go home, because any society that thinks it's a good idea to make a sequel to one of the shittiest movies on the face of the planet means that we have officially run out of ideas.

Cinematic hope currently rests on another film released this week, which doesn't give me much succour. A recent piece in Indiewire sums it all up thusly:

"Lines are being drawn in the sand as we speak and people are taking side -- and if the chatter is to be believed, the entire fate of the movie industry rest in the hands of one very big, wet, hulking mass of a high-concept movie. It's distracting, but one can't really discuss Guillermo del Toro's upcoming science-fiction action adventure Pacific Rim without addressing some of the baggage it's arriving in theatres with this weekend with, at least for a certain (probably very small) sect of the movie going public.

"If Pacific Rim fails, if this 'original' movie cannot win at the box-office and if it (gasp) loses to the nefarious, made-from-pure-evil Grown Ups 2 from comedy Satan himself Adam Sandler, the cinematic universe will implode and will come to an end. The LucasBerg prophecies shall come to pass, theatres will topple to the ground and 3D will melt off the screens with a bitter hiss. James Cameron will plummet past you in flames screaming as he falls to his fiery doom. Ladies and gentleman, if you do not see Pacific Rim this weekend, you are not doing your civic duty as a movie-loving cinephile and you are therefore siding with the forces of reboots, remakes, reups, sideways sequels and other tools of the Hollywood Devil."

This all sounds rather dramatic, but before you begin hoarding canned goods and filling your bathtubs with two days worth of drinking water, it might be a good idea to see the damn thing first.

There is good news and bad. Let's start with the good. Pacific Rim isn't terrible. There are a few rabble-rousing scenes, lots of exciting monsters that spit up blue goop and smash stuff. That's all rather fun. The heroes of the free world include a strong black man, a tough Japanese woman and a couple of nerdy scientists. Everyone gets some time to shine.

But now the bad news: Any hope that the movie industry has of this big lug of a film single-handedly smashing audience ennui is bound to be destroyed in a big ball of blue goo. When I saw the film on opening night the theatre was half empty. The fighting robots of Pacific Rim might save the world, but they probably won't save the film industry.

Director Guillermo del Toro (Hellboy, Pan's Labyrinth) has described Rim as his homage to his childhood love of monster movies. The Kaiju, like Godzilla on meth, are massive creatures that emerge from a hole in the ocean floor with the aim to kill all humans and prepare the way for their alien masters.

Standard stuff. In response to the threat of annihilation, humans build and deploy huge robots to fight back. The 'Jaegers' (from the German word for hunter) are piloted by two humans, who must mind meld with each other in order to control the robot. I will spare you the most confusing and softheaded of the plot points. Essentially all you need to know is: monsters, robots, end of the world, and fight!

Subtlety is not high on the agenda, but ham-fisted and corny are. The film is basically a 10-year-old boy's fantasy with a $220-million budget. The love affair at its centre is as chaste and shy as a bashful kid's first crush; meaning the love that a boy has for his first giant robot, the aptly named Gypsy Danger. Pacific Rim is also a deeply old-fashioned movie. This is both its strength and its weakness.

The film retains the simple joy that comes from smashing action figures together and roaring at the top of your lungs. But one can only do that for so long before it gets boring. Despite all the attention and time lavished on the saturation of colour on the CGI water, or the details of the robot armour, the fight scenes remain two blunt instruments hitting each other. In the dark and the rain, it often hard to even see what is happening, much less make sense of it.

The dinosaur in the theatre

Let's me return to Academy Duello for a moment. The attraction that humans feel for weapons -- be it a simple bow and arrow, or a 200-foot nuclear powered fighting robot -- are pretty universal and the film taps into time-honoured concepts of courage, sacrifice and how incredibly awesome swords are. It is little wonder that every kid want to wield a blade or nock an arrow. It's coded in our DNA. Even if Pacific Rim is only a faint echo from an earlier age, it is enough.

There are a few moments when something older stirs in your heart, a deeply buried yearning for something hard and true. One scene in particular stands out. When the Commanding Officer Stacker Pentecost (played with grit by Idris Elba) gives a ringing speech about being a fixed point for the men and women under his command, you almost believe it for a moment. His words have more power than all the fighting robots put together.

But the writing is on the wall. The predicted $100 movie ticket and the imminent collapse of the industry may well be here, and Pacific Rim feels like a dinosaur, a big, clunky, outdated beast. It is not alone. The crop of summer films share many of the same characteristics. Top heavy and freighted with expectation, they roared and stomped trying to attract attention. World War Z, The Lone Ranger and Man of Steel fell short of expectations. Despite all the 3D noise and fury, it feels like we are witnessing the end of an era.

The age of the dinosaurs is passing, which means it's time for an evolutionary change. Smaller, more agile films are doing quite well at the moment, snatching bits of sustenance from the great dripping jaws of the Megalodon. Frances Ha and Hannah Arendt are offering women filmgoers the chance to see strong, complicated and intelligent females on screen.

Outside of the theatre, choices continue to proliferate. An array of terrific films have popped up recently on Netflix including Upstream Colour, Rust & Bone, Foot Note, and most happily Attack the Block, which I watched again with joy in my heart.

One of the most surprising hits is the film Gayby, which landed in the top ten of iTunes, beating out films with much more robust budgets.

This peculiar bit of news gave me pause. Gayby isn't a stop-the-presses type film, but it is funny, charming, modest, and surprising. It feels new, in a way that everything I have seen lately in the theatres, does not.

Time to put away the toys

Sitting through the onslaught that is any screening at a Cineplex theatre has changed the experience of movie-going so fundamentally that it feels like work. One must be increasingly motivated to actually go to the theatre, especially when it's so easy to see smaller films elsewhere. People are practical, and if they can get something cheaply and simply, as opposed to difficult and expensive, which choice do you think they're going to make?

The division between the giant tent pole type films and more modest fare has rarely been more apparent than it is at the moment, breaking and sundering along lines of age, gender, and for lack of a better word, maturity. The occasional lapse into nostalgia for childish things is fine, but we've been stranded there for a very long time. Superheroes, monsters, robots, explosions, boobies and fart jokes. Like Pinocchio's Pleasure Island expanded globally into world of ass, the worst impulses -- the ones that ought to squashed by hardship and suffering -- have grown fat and ripe as ticks.

There isn't too much doubt that the theatrical experience is in the midst of serious change. It feels inevitable; even the films that have crowded the theatre this summer seem to hint at their own demise. All are similarly concerned with the end of the world, whether from giant monsters or rabid zombies, or Superman's cranky relatives. But is this obsession with extinction a bit of Freudian transference? Maybe it is finally time to put away childish things and become not Grown Ups 2, but actual adults.