It's the second half of the The Sean Minogue Region vs. The Anne Murray Celebrity All-stars. We've already seen some shocking upsets (or have we? You'll have to read the other entries to find out, mwahahahahaha.) If you're wondering what all of this is about, you can start here. 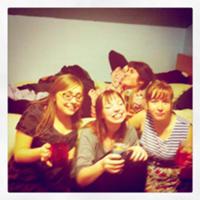 9. "Left and Leaving" by The Weakerthans vs. 8. "Oblivion" by Grimes

Along with Rheostatics, The Weakerthans are one of Canada's great, unsung indie bands. Three years after the album that bears the same name, Death Cab for Cutie would pretty much ride The Weakerthans' sound to pop rock royalty. "Left and Leaving" (and tell me you can't hear Bon Iver's "Perth" in its first few guitar notes) is about being lost and trying to find your way back to a better place that may or may not exist, but that sense of unnamed place is what grounds so many great Canadian songs.

I named Grimes' Visions as my pick for Canadian album of 2012. Pitchfork did me one better and called it their album of the year by anyone. Apparently it's impossible for any music made within the last ten years to be the greatest of all time (See: Internet), and I'm not going to break form with Grimes here -- her album is amazing, deserves all the praise it garners, and it's not beating The Weakerthans.

I'm going to go out on a limb here and say that you probably don't like "I'm Like a Bird". That's fine -- I don't much like it either. So why is it here? Because if we assume that one measure of greatness is visibility -- that a significant mass of people must be aware of your creation for it to be considered great -- Furtado's nasal-inflected pop rambling is head and shoulders above the majority of entries on this list. It had to be included because, to quote Peter Griffin, it insists upon itself.

Luckily for Land of Talk, that's pretty much the only thing it does. Land of Talk is a nice indie band that writes pretty good songs, which is enough to carry them past Furtado. But I can't see them getting much further. (If you're confused why either is here, please please please read the first entry!

At first glance this would appear to be a clear upset where the lower seed is actually the giant and not the giant killer. "Tell Me Why" struck me as a strange choice until I paid closer attention to the lyrics, which are pure Canadiana -- ships in harbours as a metaphor for love, loneliness, and the strangeness of growing up.

Across the court is, of all things, a cover song, and not even of a Canadian artist. Cowboy Junkies are a band famous for their interpretations of other songs, making them an appropriate lens for Canada's cultural melting pot. But really, can a cover version hope to take on Neil "@*&!$%" Young?

And then you listen to it.

Good god. Margo Timmins' vocals are like melting glass, just spreading out on the floor at the bottom of your heart. The instrumentation is minimal, but then "Sweet Jane" was never a complicated number, trading chord changes for a chiming bell of a melody that supports the vocals. They never performed a better song.

12. "The Old Prince Still Lives at Home" by Shad vs. 5. "Head Over Feet" by Alanis Morissette

How to compare these two? What is essentially a novelty song riffing on an '80s television show with the former You Can't Do That on Television star who doesn't know what ironic means.

Well, to start, with his take on the Fresh Prince Shad manages to basically invent a Canadian hip hop sound. So many other Canadian hip hop artists -- I'm looking at you, Drake -- get by or even flourish by sounding a lot like Americans... or a really bad version of them (paging Karl Wolf). Shad is undoubtedly a throwback rapper, but in the Canadian landscape that makes him sound fresh and, gasp, competent rather than desperate and pandering.

Chances are if you hate Nelly Furtado you also hate Alanis Morissette, and while I won't offer much in the way of protest, I will say this -- "Head Over Feet" is a great song. Not a good song, or a pleasant song, or a singing to yourself in the shower song: a great song. And it's a great song because a) it's the best song on an album that sold over 30 million copies worldwide, and b) because in it's crazy syntax it captures what it's like to actually fall in love.

Sorry Shad - it's ironic, but the love song wins.*

Feist will get her due later on, so it's not ruining the surprise to say "I Feel It All" isn't even her fifth best song. C'mon Minogue! What went previously for Furtado and Alanis applies to Twain tenfold -- apart from Celine Dion she's undoubtedly the most reviled female Canadian artist of the past two decades.

And yes, much of it is deserved. Practically all of her output since "No One Needs to Know" has been mindless pabulum of the strictly adult easy-listening, wedding reception variety. So why is this song any different? Because it sparkles. At the time Shania was an unknown quantity, and her simple take on a quiet romance, while no "Something to Talk About", is pretty much the definitive new country statement about young love. (Did I mention I really like love songs?)

Winner: "No One Needs to Know"

Mangan, the current darling of CBC Radio 3, is a solid performer and good all-around storyteller, but he's not beating the song that introduced the world to Miss Leslie Feist. And certainly not one that's this insanely catchy.

That said, "Road Regrets" is fantastic, and the song you'd have playing while you escape the city on an epic road trip. Which is definitely Canadian.

There's no need to separate these because -- spoiler alert -- neither Chromeo or SNFU are beating Joni Mitchell, not even on their best day (which apparently these songs represent). And since we're on the subject, if you think Gordon Lightfoot, Paul Anka, or Guy Lombardo are any better than Joni Mitchell, you're crazy. If Gordon Lightfoot had written "River", men all over Canada would have statues of him in their dens next to the planter shaped like the Stanley Cup. Whereas if Joni Mitchell had written "Sundown", she probably would have taken up accounting.

Since we're going to be hearing from Mitchell moving forward, let's see what we have in "Needy Girl". Self-described as "the only successful Arab/Jewish partnership since the dawn of human culture," Chromeo has at least one thing most other Canadian artists of note are sadly lacking -- a sense of humour.

"Needy Girl" is a bit of a piss take (Ed. Britishism alert!), but such an accomplished one -- part Hall and Oates send-up, part WHAM! Homage -- that it actually stands as a pretty great dance track. Chromeo isn't trying to write a "River", or a "Harvest Moon", or even a "Sunglasses at Night." They just want to make you dance, and laugh, and those are noble goals in and of themselves.

Where to start with SNFU? It's easy to begin and end with Ken Chinn, aka Mr. Chi Pig, a fixture of the Vancouver Downtown Eastside and, amazingly, the only Chinese punk figure of note not originating in China, not to mention the only artist of Chinese origin to appear on this list. That alone would be worthy of mention, if Chinn wasn't such an iconic figure in his own right. Considering what he's struggled with, the fact SNFU are back in the studio recording is something of a miracle.

But I'm not going to lie -- before meeting Sean (again, read the first entry), I'd never heard of SNFU, and really had a very limited exposure to proper punk. So I am in no way qualified to judge their artistic output, except to say they're not beating Joni.

Winner: "Both Sides Now" and "River"