Lest we forget... 33 years ago this week (on Nov. 3, 1978) John Gray and Eric Peterson took the stage at the Vancouver East Cultural Centre to share the story of Billy Bishop. Peterson played Bishop and over a dozen other characters and Gray -- who wrote the play -- accompanied him on piano. The show launched Gray and Peterson on almost as many adventures as the World War One Flying Ace. Billy Bishop's latest incarnation -- the second screen adaptation featuring Peterson and Gray -- is receiving a pair of special Remembrance Day screenings (Nov. 11 at 7:00 p.m. and Nov. 12 at 2:00 p.m.) at Vancouver's Rio Theatre where Gray will be on hand to field audience questions. And I suspect Remembrance Day screenings in Canadian theatres are likely to become an annual event. 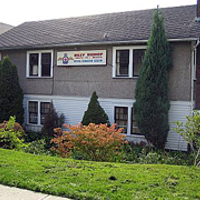 The Quest for the Perfect Pub

My first experience with Billy Bishop Goes to War was in 1998 when Gray and Peterson revisited and reinterpreted the production. When the show debuted the two stars were roughly the same age as Bishop was when he returned to Canada. Gray told me at the time that he felt they'd found something deep and rich revisiting the show 20 years later because now the show carried the gravitas of two men who'd watched some of their closest friends die, many of AIDS. Seeing that production I had trouble imagining it ever working as well starring two 20-year-olds -- the same way I can't imagine a 30-year-old Leonard Cohen being remotely as compelling as Cohen at 70.

I met with Gray this fall when he was in Toronto for the movie's world premiere at the 2011 Toronto International Film Festival where he commandeered a table outside a downtown Starbucks to talk about his most recent final reinterpretation of his classic Canadian play.

This version was born two years ago, when Gray and Peterson were asked to remount the show for Toronto's most prestigious theatre company, Soulpepper, and they came up with another new approach that acknowledges and embraces their age. "I worked with the director, Ted Dykstra, and came up with the notion that we're the same age Billy Bishop was when he died. So Eric does it in pyjamas and it puts an entirely different spin on the whole thing. It's very interesting, it's less about war and more about life now."

The Globe and Mail critic "loved the production to bits."

Soulpepper's artistic director, Albert Schultz suggested shooting a version of the play inspired by the Metropolitan Opera broadcasts and approached Sandra Cunningham of Strada Pictures. After all, the last time Billy Bishop was filmed the show won an Actra Award for best TV program. Cunningham didn't think the American model would work, but pitched another idea -- a Remembrance Day special for CBC. But CBC only needed 45 minutes. Director Barbara Willis had another idea. Give the CBC what they needed, but shoot everything.

"This was guerilla warfare," says Gray with a laugh. "We ended up working out how to do it, and we spent a few weeks with Barbara, Eric and me. Barbara had this amazing bunch of people and it was all very Euro -- the director of photography was from Slovakia, there were more people named Boris than I've met in some time -- and it looks very Euro. We shot the whole thing in one fortnight, in a studio in the CBC building. My brother Charlie did the arrangements. There's a lot of music in addition to the piano, and my brother Charlie, he's a jazz trumpeter."

According to the play's official entry in the Canadian Encyclopedia (and there are aren't a lot of plays that merit their own entry), "Their [original] production toured widely in Canada and also was seen in 1980 in Washington, D.C.; on Broadway (Morosco Theatre) and off-Broadway (Theatre de Lys) in New York; at the Edinburgh Festival; and in Los Angeles. It was staged in 1981 at the Comedy Theatre in London's West End."

A second production launched in 1980, proving that the script had a life beyond Gray and Peterson. Since then it has been produced by pretty much everyone, everywhere. When we met, Gray raved about a recent Vancouver production starring Ryan Beil as Bishop (and everyone else) and Gray's son Zach as the piano player. "Ryan Beil was fabulous. Watching Ryan and Zach do it at their age, you're looking at these guys and they're younger than any of the guys we've seen do it. And you look at that and it's never far from your mind: that's what they looked like. These guys getting torn to shreds."

For his part Beil says that "what makes the script really interesting is Billy's ongoing struggle with the fact that even though war is hell he's enjoying his role in it."

If someone can name a more successful play that's launched in Vancouver, feel free to add your own suggestion in the comments section. I've got a degree in theatre, and while I can name a lot of B.C. plays I love, I can't even come up with a close second. After seeing the Soulpepper remount, Toronto Star critic Richard Ouzounian wrote that the play "reasserted its right to be called one of the great works in the Canadian theatre canon." And unlike a lot of Canadian classics, Billy Bishop is seen on stage more often than it's read -- and it's seen around the world.

Gray is hoping the movie will take the production even further. When we spoke it had already been invited to a festival in New Delhi and Gray feels the movie more than does the story justice. "I really like it. I love it, actually. It's not the play. It's Barbara's take on the play, and it's almost like meta-theatre, because what happens in it is that the set is like a conceptual cluttered fucking attic. Peterson is nearly dead, of course -- Bishop is nearly dead -- and the whole thing is done from that standpoint. We rewrote the ending to go with this and a lot of the shots are of empty seats, like it's in the theatre. There's nobody there. So the whole thing is like, where is he? Who is he speaking to? And it's all in his head, the whole thing. He's telling this story and even I'm in his head," says Gray. "It uses the fact that it's a play as an aspect of the movie."

Gray says the play has always been popular with Canada's vets. "We were probably one of the first shows to come out that didn't address the idea that war was a good or a bad thing. Up until then if you did something on war it was your duty to pile in and add your voice to denouncing war, that it was a bad thing, which is kind of as meaningful as saying cancer's a bad thing. In fact, we got a bad review from the Village Voice on that basis. We're not anti-war enough!

"We just wanted to say, 'What was it like?' Yes, war is a terrible thing, but men say that that was the greatest time of their lives. You've gotta figure that in," says Gray. "What was it like to be in the war? It's not about getting killed, it's about surviving. And that's what really makes it more interesting, because it's about the ironies and the price of survival."

When I asked Gray what else I should know about what he's up to he shared the plot of the latest book he's pitching (he's published several novels as John MacLachlan Gray). The newest one is a thriller set in Nova Scotia, near where he grew up. Gray said that other than that, "it's pretty much a vacant lot right now, and I'm quite happy with that. I've been in Toronto too much, and I want to go -- I have a cabin near Sechelt and I'm going to put in a window. I miss my dog, I miss my wife -- not necessarily in that order."

As for whether there's a new play in the wings, Gray laughed again. "I haven't done theatre in so long I don't know. I'm going to be 65, for fuck's sake. I got the freaking gold Medicare card. I can walk onto the ferry for free on weekdays. The day after my birthday, I get a discount on my auto insurance. I get the senior's discount for services at Vancity. I have to take full use of this."