The thing that struck me most about Chris Smith's new documentary Collapse is not the end of the world scenario sketched out by its principal and only character Michael C. Ruppert. Rather, it is the sadness and loneliness that settles like damp cold inside your body while watching it. 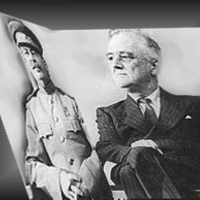 The film dovetails strangely with other things going on in the zeitgeist at the moment, or perhaps, they're only going on in my personal zeitgeist. After I staggered away from the screen, I read Richard Rodriguez's article about the death of the American newspaper "Final Edition" in Harper's Magazine. That old saw you may say, but the ending of the essay pierced me like an arrow. As the author climbs his stairs, having collected his news from his front step, he writes "I am so lonely I must subscribe to three papers...The three together equal what I remember."

Rodriguez's article is about more than the loss of newsprint, institutions that were once upon a time pillowy and rich with classified ads, obits, and columns by men who wore pork-pie hats without irony, and let cigarettes stick to the side of their mouth dribbling smoke. Rodriguez is writing about death and the falling away of the things we remember and love about our world. Newspapers may just be black ink on white paper, but they represent a sense of community, of belonging, a sense of greater participation in the civic life, etiquette, social commerce, all that is human. A certain type of life that we remember. The fact that we are looking backwards at it means that things have already shifted.

Collapse deals with similar feelings, but through far darker scenarios. Even as Michael Ruppert, smoking intensively throughout, talks about the coming apocalypse and the price to paid by humanity, the first place that real hot live emotion comes spilling out is when he says, "We've have waited for so long, just for someone to listen to us." Is it any wonder that Ruppert's online newsletter is called From the Wilderness? His may be a lone voice crying to be heard, but he's not alone.

When Ruppert says "us" he is ostensibly talking about the "doomers." They are a certain segment of the current cultural discourse who steadfastly maintain we're entering the last days. The end is nigh, and one must prepare for the coming transition to a new world paradigm. But first we must suffer through the decline of old institutions, newspapers, ideologies, populations, old dogs, old people. Death, that great efficient engine is self-cleaning, sweeping away all the old stuff to make way for the new. Before we can move on, though, the old stuff must be properly mourned, or at least understood.

That is what Collapse is engaged in doing. It is as much a backwards look at recent history, as well as a prediction for the coming change.

Predicting the future is, of course, a fool's game. No one really knows anything, but you can make an educated and thoughtful guess, which is exactly what Ruppert is apparently trying to do. People are beginning to pay attention, especially when even the mainstream media lets slip that things are not sunshine and roses.

Collapse has achieved what 30 years of writing and research had not for Ruppert, putting him centre stage, where he is interviewed by the Wall Street Journal.

Who is this guy?

Ruppert's own history is a deeply curious story. Born to parents who were both tied to the security community in the U.S., Ruppert joined the LAPD, only to discover that he too had a security clearance somewhere in the grey zone beyond top secret. As a young idealistic narcotics detective, he was recruited by the CIA to help smuggle drugs into the U.S. After attempting to blow the whistle on the CIA's drug operations, things got increasingly dicey for our hero. Ruppert's confrontation with CIA boss man John Deutsch is the stuff of Internet legend.

Betrayed a woman, shot at, and trying to survive, Ruppert's story sounds like the plot of many a bad movie. Whether it's true or wildly embellished probably matters little.

So, what does Mr. Ruppert actually have to say? He speaks of many things: peak oil, human population growth, nefarious doings by different governments around the world, mysterious deaths in the American army, the Tailwind Scandal about Sarin gas being used in Vietnam, FBI sabotage, strange burglaries, and above all financial twistiness. Ruppert maintains that his economic predictions were bang on the money, and quotes St. Timothy, who said that the love of money is the root of all evil. "It is the love of money that has the potential to exterminate, to render extinct the entire human race."

Signs of the apocalypse

"Politics is a continuation of economics by other means," he says and goes on to explain how derivatives, fiat currency and fractional reserve banking really work. The inherent madness of this system, if it hasn't already become extremely apparent from other sources, is made that much more explicit. Much of what Ruppert is talking about has been carefully taken apart in a number of other documentaries, most notably American Casino, Let's Make Money, Capitalism: A Love Story and We All Fall Down. Perhaps, the most eloquent elegy to society's collapse involves not talking head interviews at all, but pure image and sound combined to delirious effect.

Whether you believe what Ruppert has to say or you think he's a genuine loon, much of what is discussed in the film has either already happened or is in the process of happening. Peak oil will peak, no matter what humans do. For some of the larger forces set into motion, there isn't too much to do about them, other than perhaps crawl into a shallow hole in the ground and put your arms over your head. But it's important to look it in the face. Crawl out of your ditch, take your arms off your head and really look.

Director Chris Smith has borrowed from earlier documentary precedents, most obviously from Errol Morris, complete with a nervously muttering Philip Glass-type soundtrack that is used almost ironically. (In one scene, when Ruppert calls for a break, the music abruptly quits as well, and starts back up again, like a soundtrack for the damned, when he begins to speak.) The director interjects occasionally, playing the role of the skeptic on behalf of the audience, asking Ruppert a series of obvious questions. He gets slapped down a little bit, but it's a useful tool. Smith brings up the question of human ingenuity, which Ruppert counters with the laws of physics and the logic of closed systems, saying what we're witnessing is not just Social Darwinism, but real Darwinism.

But what really happens when a government collapses? Ruppert maintains that the real break will come when oil prices spike again and people can no longer afford to purchase the oil. When society breaks down, things won't disappear overnight, they will shudder, lurch and slide slowly into a stop. This may already be happening as different U.S. states deal with bankruptcy, and systematically cut services. Ordinary maintenance of things like roads, bridges and sewers, the infrastructure that supports modern industrialized society stutters to a halt. It's not just the U.S. where things will fall apart, other economies are also primed for collapse. The film name checks Britain, Eastern Europe, Mexico, Pakistan and Afghanistan. Says Ruppert: "The people who are running the planet are losing control."

Ruppert speaks well, in perfect little sound bites, and often comes across as arrogant, filled with hubris, but also vulnerable, sad, and scared. Calling for revolution in the human soul and mind, he growls "Every aspect of human existence is on the table." Political parties, religion, ideologies won't help anyone survive. They are archaic, dead fossils holding people back. The real quest is to find the right balance between growth and a planet with finite resources.  "It's all about getting balance back. Grow up or die."

In the face of collapse, much of what is advocated is purely practical... store seeds, restore the soil, get rid of your cell phone, invest heavily in local food production. Ruppert cites two very different examples of what can happen when oil disappears, namely North Korea and Cuba. After the collapse of the Soviet Union, both nations were thrown upon their own resources, almost overnight. These very different scenarios provide an extremely useful primer in how survival can happen, or not, in the face of sudden and irrevocable change. Says Mr. Ruppert: "Community is what will save us... You will fail as a rugged individualist, you will survive as a member of a tribe or a family." Then he bursts into tears. Whether it's the notion of people coming together in the face of calamity or the fact that uncountable numbers of human beings will suffer and die as the world grinds to a halt is unclear. Personally I think it is the former.

Calling for a revolution in human thinking, what Ruppert also seems to desire is a return to human community. A stripping away of Wal-mart world and plastic vampire television culture. Real living encompasses fear and love and joy. "I see all that richness buried under such bullshit," he says. I have to admit at that point in the film, I thought "Right on, brother." But still... While there is a great deal of stuff I would not miss about contemporary culture, there is much that I would miss. Like Richard Rodriguez memorializing about the death of newspapers, there are many things that would be deeply mourned on a personal level.

From the biggest social crisis to the smallest heartbreak, it is impossible as a human to not be human. We are trapped by our own emotions, and our inability to surpass how we feel about things. But in the face of real honest to goodness genuine collapse, there may not be any time for waxing rhapsodic about the good old days and grand institutions that once were, no time for sentiment in the face of survival. Or as, Mr. Ruppert so eloquently puts it, "Climb down off the cross asshole, we need the lumber."

Collapse is playing at the Vancity Theatre on Nov. 17th and Nov. 21st.