Even in this digital age, the front page of a newspaper is still one of the clearest windows we have into the priorities of those who produce it. Last week, that window showed Canadians many of their biggest newspapers seem to care less about global warming than their counterparts in the United States, on the eve of an election that will determine the country’s future action on climate change.

At issue is how those newspapers handled the Intergovernmental Panel on Climate Change’s most recent report, which United Nations Secretary-General António Guterres described as a “code red for humanity.”

The report was released on Aug. 9 at 10 a.m. in Geneva, Switzerland, when most of North America was asleep. But some reporters were learning about its findings the day prior. As a result, their newspapers had two days during which they could put that news on their front pages, demonstrating its importance to readers.

At the 10 largest circulation newspapers in the United States, as determined by the Alliance for Audited Media, eight took this opportunity on one or both of those days. They devoted between four and 30 per cent of their front pages to the IPCC report.

The Boston Globe was notable in this regard, fronting stories about the report on Aug. 9 and 10, with two of them taking up 51 per cent of a single page. It was also notable because one of those stories shared with readers “what steps individuals can take” to “tackle warming now,” providing them with a sense of control in an otherwise uncontrollable situation.

By comparison, the New York Post, owned by Rupert Murdoch’s News Corp., and the Chicago Tribune were the only publications among the 10 to not give the IPCC’s report front-page treatment on Aug. 9 and 10 — although the Tribune did so a day later. That meant, on average, those 10 papers devoted 12 per cent of their front pages to that story.

But a much different approach was taken north of the border.

Against the backdrop of out-of-control wildfires and a deadly heat wave attributed to climate change, the IPCC report got, on average, only about half as much front-page space at the 10 largest circulation English-language newspapers in Canada.

Among those papers were two which didn’t front that story: Vancouver’s Province and the Toronto Sun. Both belong to the Postmedia Network, which has a history of publishing climate science rejectionists and promoting the country’s large fossil fuel industry.

Instead, those newspapers decided a story about how COVID-19 rules will mean fewer American day trips to Canada and a profile of a 10-year-old “golf phenomenon” in Ontario were more important than the latest authoritative scientific evidence about climate change.

But even the Canadian newspapers that did promote the importance of the IPCC report were less generous than many of their American counterparts. The biggest exception was Torstar’s the Toronto Star, which was found to have the “most accurate climate coverage” in a recent study of 17 international newspapers published in the journal Environmental Research Letters. It used about half of its front page to promote three staff-authored stories about that report the day after its release, beneath the headline “Code Red.”

But other newspapers in the Postmedia chain didn’t seem as worried about that warning. They included the Calgary Herald, the Edmonton Journal, the Vancouver Sun, and the flagship National Post, which was found to have the “least accurate” climate change coverage in the Environmental Research Letters study. Those newspapers fronted the IPCC report by promoting a story about how Canada’s oil patch remains “confident” about its future, despite findings that the UN’s Guterres said “must sound a death knell” for fossil fuels.

On the day the Intergovernmental Panel on Climate Change released its report called a ‘code red for humanity’ by the UN Secretary-General, this was the top half of the front page of Postmedia’s flagship national newspaper. Below is how USA Today treated the same news, filling about half its front page.

As for the Globe and Mail, Canada’s newspaper of record committed just five per cent of the front page of its Ontario edition to that death knell. That’s unfortunate because the newspaper, which renewed its “pledge to cover the climate crisis” last year in a letter to readers, was the only big Canadian publication to front the IPCC report on Aug. 9 and 10. But, in both cases, that happened at the bottom of its front pages. And, on Aug. 10, this treatment took the form of two tiny teasers that occupied just one per cent of the page. 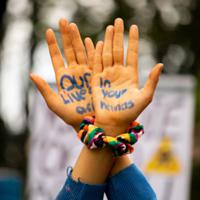 To Save Ourselves, We’ll Need This Very Different Economy

In addition, Canada’s biggest newspapers mostly relied on wire services or reporters at other publications to write those front-page stories. Just three were the exception to that rule. By comparison, six of the American newspapers had their own staffers write those stories.

While such statistics expose these failures in coverage, they do not explain them. The only thing we know for sure is Canadians likely had less of a chance than Americans did to be informed about the IPCC’s findings.

That matters because, according to Canada’s federal government, the country is the world’s third largest oil exporter, sixth largest natural gas exporter and seventh largest coal exporter, making it a major part of the global warming problem. And, as Canadians go to the polls for a snap September election, the most important decision they’ll make is whether they want their country to be part of the solution.