At the end of Kenney’s Tuesday press conference announcing these measures, Postmedia reporter Sammy Hudes asked the premier an obvious question. Would he acknowledge any responsibility for Alberta’s bad second wave?

“That sounds more like an NDP speech than a media question,” tartly replied Kenney, who accused the reporter of levelling a “drive-by smear.”

The premier rambled on, and by the end had basically said no.

“I don’t accept the Alberta bashing that is going on here,” Kenney later declared when asked the same question again.

It’s an established propagandizing method of anti-democratic strongmen to conflate their own identity and political fortunes with that of the nation (or province) they happen to temporarily serve.

But what if Kenney had surprised and replied honestly? Here would be five truthful admissions.

'Yes, I adopted an approach of complacent exceptionalism. I thought the virus would never get as severe as it got. I dithered in the fall.'

The facts are pretty plain: the virus is highly contagious. It moves as people move. The more COVID-19 erupts in the community, the greater the risk to the elderly and the vulnerable.

Therefore, the faster a government installs firebreaks or extinguishes an outbreak in the community, the fewer fire trucks it will need. But whenever a government lets the fire get out of control, it takes more energy, time and grief to restore health. Australia, New Zealand, Vietnam, the Atlantic provinces and Norway learned this lesson. They also learned that the best health outcomes are the best economic outcomes. Alberta (and most of Canada) did not.

'Yes, I botched this thing by repeatedly ignoring the warnings of doctors and health experts six weeks ago.'

On Nov. 9, dozens of doctors wrote the government requesting a two-week lockdown because exponential growth meant that 200 hospitalized cases with 39 patients in Intensive Care Units would soon become a flood.

“We are looking at pain whatever happens,” warned Noel Gibney, a professor emeritus at the University of Alberta’s department of critical care medicine. Gibney was right: there are now 685 hospitalizations and 121 patients in intensive care.

On Nov. 12, another group of doctors warned Kenney’s government of “an impending health-care crisis resulting from the uncontrolled spread of COVID-19.” More letters followed. In total, 400 physicians and three unions representing 115,000 health-care workers pleaded with the government to act.

Kenney didn’t. He even dismissed the medical chorus as fearmongering and later cited the charter for not adopting tougher measures. (Remember, this is a government already at war with doctors over funding and that plans to fire 10,000 health-care workers to allegedly save money, and all during a pandemic.)

Kenney’s inaction had medically predictable results. Hospitals have been maxed out, and health-care workers have been abused by a crushing wave of the coronavirus that could have been tamed with agile governance.

Deaths have skyrocketed. By the end of September, COVID-19 had claimed the lives of 264 Albertans. But since then, more than 367 citizens have died. No one knows how many Albertans will suffer from long-term heart and lung damage from COVID-19 infections or what the cost will be to the health-care system.

'I got complacent and thought, hey, why should we bother putting out one COVID-19 fire if we’re just going to have another fire in the future?'

Yaneer Yar-Bam, a pandemic expert, has a good answer for that kind of defeatist thinking. “Just because you can’t get rid of all possible future fires,” he says, “doesn’t mean you don’t put out a fire.”

Everyone knows that if you let a fire get out of control in one room, you will soon have a burning house. This fall, four Atlantic provinces proved they were more adept at putting out fires and saving homes than the government of Alberta. They acted quickly. They didn’t dither. And they didn’t create false narratives about lives and livelihoods. Nor did they blame personal responsibility for their failures.

'I wasn’t transparent about the data.'

The Alberta government has not shared data on the pandemic, and in particular the Reproductive value (R value). Of all pandemic math, it is the most critical. It tells citizens how fast the virus is spreading in the population. It also tells citizens how well their communities and their government are performing.

An R value of one means that one person is infecting just one other person. An R value of two means one infection will grow into two infections, and so on. No jurisdiction can keep the pandemic under control without an R value below one.

Alberta’s R value has been as high as 1.18 in recent weeks. And that information came from an Ontario Biostatistician Ryan Imgrund, not the government.

'I pretended all fall that half measures, piecemeal policies and invoking personal responsibility would get the job done, and I was wrong.'

Then on Nov. 24 it enacted a few weak measures the virus could drive a bus through. In the name of freedom Kenney tellingly left the bars, churches and casinos open, which really gave COVID-19 the greatest mobility of all. Globe and Mail health reporter André Picard called Kenney’s performance “feckless.” Ten days after the new measures, Alberta’s caseload continued to climb, indicating that they were a total failure. 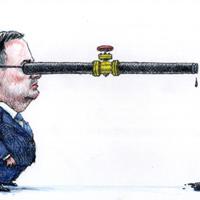 Jason Kenney Has Failed Alberta in Its Time of Crisis

Here is the hard truth. Half measures don’t work with COVID-19. Either you stop people from transporting the virus around, or you don’t. A four-week lockdown is the only way to stop transmission in its tracks and yes, it is not a comfortable experience. During that time smart governments will aim for zero transmission, because who the hell wants to experience another wave before the vaccines start to take effect?

New Zealand and Australia did the lockdowns right (with support for small businesses) and are enjoying a normal Christmas. Alberta could have pursued that course in early summer but chose the status quo of limping along and further endangering the health-care system and the economy.

So who’s the Alberta basher? Own it, Mr. Premier. You just bashed your province.