Andrew Wilkinson and George Abbott, once upon a time, were colleagues in Premier Gordon Campbell’s first BC Liberal government. That was two decades ago. Today, the pair appear to be separated by a colossal ideological or fiscal chasm.

Abbott, who retired from office in 2013 after holding numerous cabinet posts and serving four terms as a MLA, recently published his first book, Big Promises, Small Government — Doing Less with Less in the BC Liberal New Era.

The work takes a surprisingly critical look at the tragic impact on disadvantaged British Columbians as a direct result of the massive tax cuts the Campbell Liberals introduced during their first days in government.

Those cuts meant a huge loss of revenues. The Liberals were hemmed in by a vow to produce a balanced budget by 2004/05. And they were restricted by a pledge to exempt health and education from funding cuts.

Result: Campbell and his BC Liberal colleagues began to ruthlessly slash spending on social services.

The balanced budget finally appeared by the self-imposed deadline, but Abbott’s book provides depressing descriptions of the consequences.

As for Wilkinson, he now is leader of the BC Liberals amidst an election. Far from accepting the folly of humungous tax reductions — and the harm done by the BC Liberals’ experiment in the early 2000s — Wilkinson today is promising an even larger array of tax cuts, the cost of which make those delivered by Campbell nearly two decades ago look almost insignificant.

Just one of Wilkinson’s election vows — the abolition for a full year of B.C.’s seven per cent provincial sales tax, followed by another year with the PST at just three per cent — comes at a two-year cost of about $10 billion.

Other pledges add up to billions of additional dollars in either foregone revenues or new expenditures, the aggregate of which is certain to blow an even bigger hole in provincial finances than currently exists. (British Columbia’s pandemic-caused deficit in 2020/21 is estimated at $12.8 billion).

So, in light of the BC Liberals’ well-documented — by Abbott, no less — willingness to close budgetary shortfalls by punishing the province’s most at-risk residents, a question arises.

Would a government led by Wilkinson — certain to confront a fiscal deficit of historic proportions, and much of it attributable to his own election promises — replicate Gordon Campbell’s zeal in gutting B.C.’s social programs?

How to create a revenue crisis

On the day premier Campbell and his BC Liberal Party were sworn into office, Abbott, then the re-elected BC Liberal MLA for Shuswap, was named minister of community, Aboriginal and women’s services.

Wilkinson — until then the president of the BC Liberal Party — became deputy minister of intergovernmental relations, working out of the premier’s office.

The very next day, on June 6, 2001, Campbell made history by announcing the first of his epic tax cuts, an eye-popping 25 per cent reduction in personal income tax rates. Over a full fiscal year, the foregone revenue was calculated at $1.5 billion.

Just weeks later, on July 30, a slew of business levies either were eliminated outright or dramatically reduced, at an annual loss of about $700 million.

The annual cost of Campbell’s tax measures added up to nearly $2.2 billion.

But not to worry. Supposedly, as Campbell and his BC Liberal colleagues claimed loudly and repeatedly, the tax cuts would pay for themselves. It was said that investors, job creators, business people and others would inject their windfall savings into new or expanded enterprises and projects, which in turn would boost economic activity and stimulate job creation.

Before long, B.C.’s economy would be roaring, generating new and sizeable governmental revenues. Like magic, the deficit would disappear and everybody would be happy.

It might have worked, in time perhaps. But time was short because the Campbell government also had vowed to produce a balanced budget before a provincial election scheduled for May 2005.

So, Campbell and his BC Liberals decided to focus their expenditure reductions on three key government departments that delivered vital social services, including Abbott’s own ministry.

Abbott opens his book promising “the story of how the dream of doing more with less was transformed into the harsh reality of doing less with less.”

Far from paying for themselves, the Campbell tax cuts “produced a yawning chasm” which “could be filled only by cuts to the 30 per cent of government that was not health, education or advanced education.”

No use looking to make up the difference in the nine smallest ministries. As Abbott notes, an across-the-board cut of 25 per cent to them would yield minimal savings, estimated at just $141 million. Even slashing a similar amount from the larger departments such as forests, the solicitor general and the attorney general would bring only about $400 million in savings.

The Campbell Liberals left themselves no choice. By refusing to reverse their tax cuts or extend the balanced budget deadline, they had to reduce outlays by billions of dollars. And that meant whacking the social service departments that assisted abused children, at-risk youths, struggling families, developmentally-disabled adults and others in need.

“Extensive cuts,” as Abbott writes, “would have to be made in large and socially sensitive ministries, such as children and family development, human resources and community, Aboriginal and women’s services, whose budgets collectively amounted to about $4.05 billion.”

That declaration appears halfway through the book. The remainder is given to the impact of the tax cuts on vulnerable British Columbians. Or, as Abbott headlines one section, “Reaping the Whirlwind.”

Four examples will illustrate the point.

Chopping child-care subsidies. The income threshold at which a family could receive a child-care financial subsidy — that is, the amount they could earn before receiving government assistance — was lowered in early 2002 from $1,500 per month to $1,215.

The domino effect would be cruel, as Abbott notes by quoting Paul Pallan, a former child, youth and family advocate. Pallan explained that “65 per cent of children who are taken into care come from single parents on income assistance.” That 9,000 B.C. families were expected to lose their child-care subsidies, Pallan observed, was “in direct contradiction with [Ministry of Children and Family Development]’s intention to increase capacity of families to care for their children.”

Shredding welfare eligibility. The Human Resources Ministry was obliged to trim its annual outlays over a three-year period from $1.9 billion to under $1.4 billion — a total cut of $581 million. The ministry, Abbott writes, “attempted to convert what it saw as a culture of dependency and entitlement into one of self-sufficiency,” and to that end “drew lessons from several jurisdictions.”

Borrowed from the U.S. was “a controversial provision that barred employable individuals and couples from collecting welfare for more than two years out of five.” The BC Liberal government decided to apply this to “parents or families with children as young as three-years-old.”

Offering a “tough-love combination of threats (such as time limits) and inducements (such as employment training),” the department was able to significantly reduce its caseloads.

Coell further claimed that 26 ministry offices across B.C. either had closed or been merged, with 859 staff positions eliminated.

Pressing single mothers of toddlers into the workplace. Abbott states that the combination of “cuts across social service ministries were particularly onerous to women in single-parent families.... Stricter eligibility requirements forced single parents on welfare to seek work when their youngest child turned three instead of seven, prompting the ministry itself to privately question the potential impacts on a child in such a situation.”

Modest relief later arrived after a change in policy: “Single parents whose children were three or older would still be eligible for income assistance, notwithstanding the two-in-five rule, but their payments would be reduced by a hundred dollars a month.”

In October 2002, the ministry sent a 23-page letter to 18,705 recipients, seeking to confirm their eligibility. But, after “reported suicide attempts by recipients suffering from mental illness,” Abbott writes, “approximately 5,000 clients in that category were automatically qualified for benefits.”

In the end, a grand total of 46 people — again, out of 18,705 disability recipients questioned by the ministry — had their cases closed.

B.C.’s auditor general investigated the whole mess and declared that “the major cost savings the ministry expected the review to gain were not achieved. At the same time, the review created increased anxiety for many of the ministry’s disabled clients.”

And here Abbott allows himself a brief editorial comment: “In short, persons with disabilities (like the mothers who fell short of thresholds for child care) were obliged to do with less while waiting for the tax cuts to pay for themselves.”

We return to the present, just past the midway point in the current provincial election campaign. History seems to be repeating itself as a BC Liberal leader is promising that if his party attains power, gargantuan tax cuts quickly will be put into effect.

Andrew Wilkinson, as mentioned above, has vowed to abolish B.C.’s sales tax for a full year, followed by another year at just three per cent. Poof! About $10 billion in tax receipts disappear from the provincial treasury.

That’s not all. Wilkinson also has pledged to “immediately eliminate” the corporate-income taxes levied on small businesses, and “pause” the Insurance Premium Tax Act.

He’ll double (to 100 per cent) the tax deduction for business-related meals, forego hotel tax revenues while B.C.’s tourism industry recovers from the pandemic slowdown, and replace the NDP’s speculation tax on residential properties with a yet-to-be-defined capital gains tax. 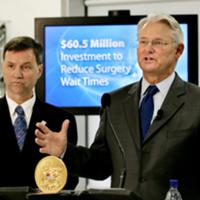 George Abbott Looks Back at the BC Liberals New Era, and Doesn’t Like What He Sees

On the spending side, the BC Liberal leader has outlined a “$1-billion plan” for the provision of $10-a-day child care for “low-income families and affordable child care for families who need it most.” There is also an un-costed loan guarantee program for businesses in the tourism and hospitality sector, and $58 million to hire an additional 200 police officers, 100 mental health workers and 40 crown prosecutors.

And don’t forget a new 10-lane, Fraser River bridge in place of the Massey Tunnel, just one component of an $8-billion infrastructure plan.

So far during the election campaign neither Wilkinson nor any of his BC Liberal colleagues have explained how they intend to pay for the combination of colossal tax cuts on top of billions of dollars in new spending.

But should the BC Liberal Party win election to government on Oct. 24, and should punishing funding cuts soon fall on the province’s most vulnerable residents, don’t say George Abbott didn’t warn us.