I was with 11 women eating our packed lunches and talking about childbirth. “Did they ever try the full-length body mirror on you?” one woman asked. “Eww, no,” said another. “Why would I want to watch?” The entire lunchroom erupted in laughter. We finished our food and headed back into the shop at Tradeworks Vancouver where, for eight weeks, we’d been learning how to do basic carpentry and joinery.

Sadly, I was one of the last students to go through the Women in Trades Training, or WITT, at Tradeworks in Vancouver. Its core funding was cut and, after 25 years, it will close in September.

But when I was there in April, the modest shop in Strathcona was filled with activity, with the sounds of saws and the smell of sawdust in the air. Our instructor, Kyle Kozak, was supportive and patient, and as a cohort we quickly bonded by sharing career opportunities and recognizing each other’s successes along the way.

With women representing only four per cent of the construction workforce in B.C., it’s no wonder that women who find each other in this male-dominated industry form meaningful and lasting relationships.

I became interested in trades only this year, and I can’t believe I didn’t do it sooner. No teacher or guidance counsellor ever mentioned a trade as a possible career for me as a student in Kelowna. It simply wasn’t on the radar.

Now, with some basic knowledge and minimal experience, my confidence around tools, materials and job sites has increased. It didn’t take much to convince me that I can, in fact, build things.

And I can earn a salary while I learn how to do it. I could have done this when I was 17 and then completed that very useful fine arts degree — this time with zero debt.

Katie Weddell shares a similar trajectory. Even though she was exposed to trades as a girl growing up in Calgary with a carpenter father, Weddell did various things she disliked, like office admin and horticulture, before finding a home in the trades.

“It was the Women in Trades Training [at Okanagan College]. I didn’t know anything about the aviation industry,” she says. Then one day her class toured Kelowna Flight Craft, a maintenance, repair and overhaul facility. Seeing a Boeing 737 painted in the theme from Disney’s Frozen, she was hooked.

“It just looked kind of surreal in the hangar, and I thought it would be super cool to work on flying machines.” Now, at 26, she’s completing the second year of her three-year aircraft maintenance apprenticeship at Viking Air in Victoria. “Every day I’m learning something different,” she said.

I’m always impressed by the pride tradeswomen take in their work, especially when everyone else seems to be grumbling about their jobs. Sure, there are good days and bad days, and when one task you thought was going to take five minutes takes five hours, it can be frustrating.

And Weddell finds the industry welcoming to women. She says she feels fully valued, appreciated and respected.

Cleovina Banegas, 39, who also took WITT in Vancouver, comes from a small town in Honduras where, she says, “everybody helps each other.” As a young girl, her father took her to work helping neighbours with any job needed. She went on to work in a factory that exported interiors for Mercedes, BMW and Toyota until she had saved enough to move to Canada.

Banegas is petite and thin with long dark hair that she ties into a neat bun at the back of her head. For a while, she worked in care facilities.

“When I worked in the retirement home, every day was the same,” she says. “The next morning, I wake up and I don’t even feel excited to go there. It’s scary and bad, but it’s what you have to do to make some money.” Then she took WITT at Tradeworks Vancouver and her work experience changed.

“In trades, every day is something new,” she says. “A different tool, a different material. It’s power tools, it’s measurement, and you have to use your body, but people told me it’s not for me because it’s too heavy.”

Banegas mimes her technique for putting up a seven-foot sheet of drywall using her chest to brace it and her feet to kick it. It might not be the way the guys do it, but it works for her.

According to Build TogetHER BC, an initiative by the BC Building Trades union to recruit women into trades, construction is “the last frontier” for women who never benefited from the “insular recruiting strategies in the past.”

Challenging such exclusionary recruiting is Randy Callaghan, who recruits for PCL Construction in Vancouver. He’s desperate for resumes from tradeswomen.

“Back then it was really rare to see a woman on site,” he says about the construction industry in the past. “The acceptable behaviour was full of abuse. It was, ‘I got hazed so I can haze others.’ There were inappropriate pictures on site. I haven’t seen that now for years.”

As the older men leave the workforce and the industry braces for major labour shortages, the culture is being forced to change. The B.C. Industry Training Authority and federal government are putting more money than ever before into programs aimed at those who were historically left out. A program to pilot an Apprenticeship Incentive Grant for Women is getting almost $20 million over five years.

Initiatives like the Ministry of Advanced Education, Skills and Training’s Builders Code BC, whose mandate is to “set a solid foundation for the equal and safe treatment of all employees,” are reaching employers from large corporate projects to small businesses to target bullying and harassment on the worksite. 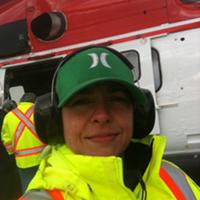 Meet the Three Percent: How Women Succeed in Trades

When asked if he does anything differently for women on site, Callaghan says: “Nothing. We do nothing different. We just want to do everything really well. We want to set up our site for all the people who come in.”

Since completing the Women in Trades Training, I feel that I, too, belong on a construction site, that I’m not an imposter, and that I’m not going to slow anyone down.

Women add to the trades. If anything, as Callaghan points out, “Productivity, safety and morale goes up when women are present on site.”

And if you’re a woman and you’ve been told this industry isn’t for you, Banegas has some advice.

“Don’t be afraid to do something new and don’t listen to anyone who tells you not to taste the water because it’s salty,” she said. “Until you try it, how are you going to know?”