It was after climbing out of a float plane fuel tank, respirator on and reeking of fumes, that Rebecca Dunn knew she had found her place. "You just do it," says Dunn. "You don't care what people think so much." 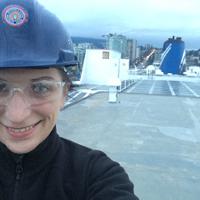 A graduate of kinesiology at Simon Fraser University, Dunn is now a supervisor at a large maintenance hangar at Heli-One in Vancouver, where she has been working for 10 years since finishing her trades and technology training in aircraft maintenance at BCIT.

Researchers point to a wide range of complex reasons for the gender disparity -- from "hostile" male-dominated work culture to assumptions about physicality and strength. But the key to removing those barriers, say experts, is to focus on what works for successful tradeswomen like Dunn.

How did Dunn find her fit? First, she completed an all-women trades exploration program, designed as pre-apprenticeship training for those looking to enter the trades.

"It's basically the tip of the iceberg so at least they get an idea of what the trades are about," says Betty Butchart, an electrician and millwright who teaches at BCIT's trades exploration program.

Classes at BCIT run in 16-week blocks, where students experience 14 trades for one week each. The courses are run as men-only or women-only, which has proven to be the most successful learning model.

Dunn says the program changed the course of her life. "That was the perfect environment where you didn't have that intimidation," she says. "You got an honest view of what it was about and you got to see the raw part of you that liked it or didn't like it, without the concern of what other people were thinking or watching or doing."

After three decades in the trades, Butchart is adamant about reaching out to experienced tradeswomen or WiTT groups and educators supporting women's transition into the field.

In union workplaces, she recommends women become well versed in rights and responsibilities. "Find out what kind of support you are going to have there," she says. "Guaranteed, there will come a time when you're going to need it. It's just the way it is."

Non-union environments are trickier, according to Butchart. "You can't rock the boat. Because when it comes to keeping your job on the next job, they look at who they are going to keep, and let's face it, it's not going to be the one that's rocking the boat. That's usually the one that leaves first."

When intimidation and resistance do arise, both Dunn and Butchart say resiliency and clear communication go a long way.

"No one, man or woman in any position likes to be undermined," says Dunn. "A lot of that is dealt with by approaching whoever has done the undermining, and bringing it to light."

"I've had conflicts with a couple people here... and that's ok," she continues. "They can't take it, no problem. I know at the end of the day what I'm asking is fair, is true, is honest."

For Dunn, Heli-One was the right fit. "Around here there are a lot of progressive people in their thinking. I don't have a lot of the negative experiences."

Consistency in the job is part of Dunn's success. She works in a hangar, with the same people day after day, unlike other trades which may include a new job site several times a year.

Tradesworkers describe a period of proving skills and aptitude. "To continuously have to go in, and prove yourself time and time again, I'm sure is a very different experience," says Dunn.

Workers say the proofing period is one of the hardest parts of the job. "Most times you've got to work harder and faster than the men on the job site because you've got to prove yourself. You do," says Butchart. "You can't just go on the job site and expect to be treated equally. Good luck with that. You need to be able to back yourself up in front of these people."

Management attitudes at Heli-One provide an extra layer of support for Dunn.

"As far as management goes, I didn't really feel that I was treated any differently. I think on that level anyone that comes in here and just keeps your mouth shut and just does what you need to do and show interest and all that, I think that's success for anyone across the board."

Dunn's path isn't the only option for women moving into trades.

Sandra Corbett, a journeywoman joiner, knew that her path to long-term success was to become management -- and become self-employed. Trades exploration was also her first entry point to the skilled trades, which led her to complete her joiner's ticket.

"After about the first year I knew that I wanted to work for myself," says Corbett. "I'd had enough jobs where I wasn't happy where I was. I wasn't going to take just any job."

Corbett absorbed as much as she could while working for others, then launched her own cabinetmaking business. With the extra responsibility of self-direction, she enjoys full creative control over the projects she takes on -- as well as the partners she works with. "You don't have to be worried about going into work cause there's some jerk."

After three decades in the field, Butchart is seeing a subtle shift in her maintenance department. And while she admits that four women of about 50 workers is far from equal, she sees workers like Dunn and Corbett lighting the way for others.

"I think over time, the more women they hire on, it'll happen, it's happening," she says. "It's just going to get better and better."