The Green Party of Canada has hired some muscle for the looming federal election campaign, and it comes in the person of Warren Kinsella.

Kinsella was the general in the Liberal war room who took off the heads of the Conservatives in 1993 when they mocked Jean Chretien’s facial paralysis in a political attack ad.

After months of hand wringing and negotiation, the Greens have hired Kinsella to set up a “situation” room for them. His principal task, according to party sources, is to “protect” Elizabeth May from the kinds of attacks that are now routinely made on political leaders, on social media and by other parties.

“Elizabeth had to admit that she does not have the sophistication it takes to deal with this stuff. We can play to her great strength, climate change, but only if we don’t let other people take her apart at the knees. Kinsella knows the dark world much better than we do. By hiring him, we are sending a message to other parties: we will not just let ourselves be attacked.”

One example where the Greens feel their leader was unfairly abused occurred in the wake of her arrest during the recent Kinder Morgan protests on Burnaby Mountain. The blowback was fierce from the Conservatives, who attacked May far more forcefully than Kennedy Stewart who also was arrested. At the time Stewart was an NDP MP.

May paid a larger fine than Stewart, who left federal politics and is now mayor of Vancouver. The presiding judge in the case accused May of “exploiting” her role as MP.

The abortion issue also raised a ruckus for May that threatened to spiral out of control. After giving a speech to a group of nuns in 2006, the Green Party leader was accused of being against women’s right to choose to have an abortion. Years later, the party was still in defence mode, forced to push back against potentially damaging commentary by insisting May’s remarks were taken out of context.

May has been attacked for being too cozy with Conservatives given the time she spent working for the government of former PM Brian Mulroney. May’s defenders point out she did negotiate the Montreal Protocol (the agreement to protect the ozone layer) within the Mulroney government, and then she quit when they crossed what she took to be an ethical line.

Communications issues are always important in politics, but in what could easily turn into May’s legacy election, they are hypercritical during the writ period. And they are even more important with the Greens riding some momentum towards a parliamentary breakthrough.

The upside of hiring Kinsella is that he has a proven track record as a war room legend, a reputation forged during his time with former prime minister Jean Chrétien. Savvy, tough, unrelenting. He is also a lawyer and president of the Daisy Group, his communications firm in Toronto. And he publishes a blog aptly named “The War Room.”

But there is a risk in putting Kinsella on the team, even if it’s only on a fixed term contract.

The Greens have pitched themselves as a party that does politics differently. That has always meant a firm prohibition against ad hominem attacks on the party’s opponents. Kinsella is a person who has earned his chops as a political bar room brawler, someone who never let diplomacy stand in the way of landing a good shot.

In fact, he’s made it plain that “negative politics work” and proudly bills himself as “the Prince of Darkness” in Canadian politics. One former ally, deciding Kinsella’s methods posed too big a risk for clients, reportedly called him “a human shrapnel machine.”

May has not responded to a request for an interview, but she clearly understands that although there is a clear advantage to hiring Kinsella, there is also a risk. This is what she said to her inner circle after the decision had been reached to engage Kinsella: 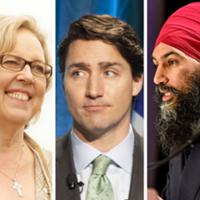 Why Not an NDP-Green-Liberal Coalition to Battle the Climate Crisis?

“People will accuse us of swimming with the sharks, but we have to keep reminding them we are dolphins.”

There is more to those words than an amusing aside. The Tyee has learned that under the terms of the agreement reached with Kinsella, his job is not to be the “wolf” attacking detractors and political opponents, but to “protect” the leader.

“We have suddenly hit the big time, we have a real chance to be a force in the next parliament. Our agreement lays out that this is a protection, not an aggression, contract. Our own comms team will be working with him.”

Sources within the Green party say Kinsella initially reached out to the Greens to run as a candidate. From that initial approach, a deal was worked out to serve the party in a different capacity.

The Tyee addressed nine written questions to Kinsella, none of which he answered. One of the questions asked was how he would answer critics who might argue that May has joined the mainstream way of doing politics with this hire, or that he is a bad fit with the Greens. Though he didn’t reply to the questions, Kinsella did respond. Here is his statement:

“How’s this? I met with Elizabeth May and she frankly blew me away. She was passionate, she was smart, she was awesome. Like a lot of former Liberals, I’ve been looking for somebody to represent my point of view. She and the Greens are it.”