TAKE A PEEK AT ‘CHILDREN OF GOD’

Children of God returns to Vancouver later this February after a national tour and its highly successful 2017 world premiere at The Cultch. Tickets are on sale now.

To watch a short video preview of the show, go here.

Imagine you live in a remote community where all the families know each other and the kids play together. Then one day, a stranger comes and takes every child away.

These questions are the foundation of Children of God, his lauded musical exploring the devastation caused by residential schools. The play, which premiered in Vancouver in 2017, returns to the Cultch on Feb. 20 before beginning a provincial tour on March 13.

Audiences can expect an even deeper story, says Payette, honed by two years of performances. The musical is not only “tighter,” he says, but has a slate of new talented performers including two-time Gemini award-winning performer Michelle St. John, who plays a mother who loses her children to the schools. Ojibwa storyteller Dillon Chiblow plays her son, Tom. Chiblow’s powerful ability to connect with the audience is in itself reason enough to see the play, Payette says.

A Globe and Mail reviewer, after seeing the premiere in 2017, wrote that Children of God had “the most punch-to-the-emotional-gut ending” they’d ever seen in theatre.

The play opens with Tom returning to his mother’s home on their First Nations reserve, hoping to find work and piece his broken life back together. He is flooded by memories of his time in residential school, and the audience is taken back 20 years to when Tom was a child and a student alongside his older sister, Julia. The narrative brings to life some of the children’s grief, as well as the pain their parents faced. It sheds light on the racism Indigenous people face and the shame some internalized, driving them to try to “pass” as non-Indigenous for the sake of a better future.

Payette, an Oji-Cree writer-director from a northern Ontario community, says he’s excited to bring the show full circle by coming back to the place it started, at the Cultch’s York Theatre. While he doesn’t have family who attended residential school, he spent years researching and talking to survivors as he created the musical. Some of the actors in this year’s run do have family who attended residential school.

The Tyee recently caught up with Payette to talk about the production, and what’s he’s learned creating and developing the work. The interview has been lightly edited for length and clarity.

The Tyee: The musical premiered in 2017. With the feedback you’ve been given, have you tweaked the play or changed it in any way, or developed new approaches?

Corey Payette: It feels great to get to revisit the work and come back to it time and time again. Often, we have different members of the cast, so it’s a really great experience of mentorship and taking them under our wing, and trying to get them to the place we know the show can be.

Every single person we’ve ever talked to... has feedback about the show and about different places that we should put more focus on certain things. Over the years, I’ve had survivors talk to me about the violence that needed to be there within the students, between different characters. Some of the violence that was coming down from the nuns and priests... it was sort of like what was being done to [the students], they did to others.... So some of the students ended up being really aggressive to each other.

Survivors and community members gave us enormous support and insight into how to make the show more truthful for them.

We have different cast members. Michelle St. John, [who] people will remember from The Road Forward, a Marie Clements film... she was the lead in that. She just has this extraordinarily powerful voice, and she plays the role of Rita.

Then the lead in the show is an Ojibwa storyteller, Dillon Chiblow, and he’s also just extraordinary.

As we’ve gone across the country, we’ve often had different orchestras playing, but now when we come back to Vancouver, we’ll have a lot of the original orchestra members. It’s a really great opportunity for musicians to have a chance to tackle some of this music again.

I understand you did a lot of research. How many years did it take?

It took seven years to write, and that was many years of research and of working in the community, talking to survivors and elders and trying to ensure we were representing the show in a way that was respectful. And that we were honouring the experiences of survivors.

For part of that process, we took the show to the Chief Louis Cultural Centre that was historically the residential school in Kamloops, and workshopped it in the chapel of the school.

At that event, there were two men sitting in front of me who were both residential school survivors and who went to that school. They were really, really struggling through the show.... They cried through most of the first act. And I turned to them and said, “You know, we have support workers here you can talk to.” One man said to me, “I’m not leaving my seat.”

He said, “I never thought that anyone would care enough to witness my story, and so I’m going to sit here, and watch it.”

And I think that came out of the fact that this history had been silenced for so long.

Do you feel like you’re giving a voice to children who maybe never had one?

Absolutely. Every show that we do, we dedicate it to a different child who lost their life at residential school, whose story will never be told and who will never have a ceremony to remember them. It’s for all those children who are buried with unmarked graves at the edge of the field. That’s why we do this work.

I have a question about one particular element in the show. Rita, after her children are taken to the school... she went to the school but wasn’t allowed in to see them. Why was that needed in the play? What were you trying to show?

But it’s more complex than that. In many cases, parents didn’t have a choice. The priest and the sheriff came to them saying they would be arrested if they didn’t [hand over] their children. And so that part of showing Rita in her attempt to get her children back was to show that this wasn’t something where parents just lost their children and then forget about them.... This was about the fact that they lost their children, and in many ways their entire community was grieving. 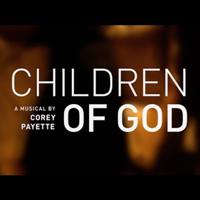 Is the show received the same way in every location? Or do some audiences respond differently?

Every place we’ve gone to is wildly different in terms of how it’s received, and also in where the community is at in terms of their conversations about reconciliation.

We’ve been places, not here in Vancouver, obviously, where audiences are just not used to talking about reconciliation. At every single location there’s always someone who gets up and says, “I’ve never heard this history before tonight.” And they’re like, “I just thought I was coming to see a new musical.”

Following the show there’s a conversation with the audience about our ongoing roles in reconciliation. The actors come out and have a chance to take in where the country is at in terms of how far we are. And I think the answer to that is we’re not as far as we think.

‘Children of God,’ produced by Urban Ink Productions, plays Feb. 20 to March 10 at the Cultch’s York Theatre in Vancouver. After that, it’s headed to Vernon on March 13, Nelson on March 15, Cranbrook on March 19 and Surrey on March 22 and 23. For more information, go here.