As we come to the end of what has been a devastating summer for many British Columbians — marked by the June heat dome event and the loss of nearly 600 people, hundreds of wildfires leading to people losing their homes, days of smoke, thousands of evacuations — the time has come for a major reboot of CleanBC, the province’s climate plan.

Whenever the B.C. government has been pressed on this matter, its leaders and spokespeople have reiterated the same message: “B.C has the strongest climate plan in the country, widely endorsed by the province’s leading environmentalists.”

We, the authors of this piece, are among those environmental leaders the government has pointed to as validators. Indeed, our praise for the CleanBC plan tabled in December 2018 is highlighted on the government’s website and news releases.

Now, however, we have lost the confidence we had in the province’s climate plan and are sounding the alarm.

As we approach CleanBC’s third anniversary, it is clear that climate events have overtaken the government’s good intentions. While B.C.’s plan may well be among the strongest in the country, that’s not saying much — it is merely an indictment of how weak government plans are across Canada. Notably, only two provinces (Alberta and Saskatchewan) increased their annual greenhouse gas emissions more than B.C. since 2005. Our GHG emissions have effectively flatlined at an historic high for the last 20 years, and indeed have increased in each of the last four years for which we have data. We have failed to “bend the curve,” unlike countries such as the U.K., U.S., Japan and Germany, all of which have recorded substantial reductions in emissions.

In 2018, CleanBC represented a promising next step on climate action. But today CleanBC is not the climate emergency plan we now need, nor does it appear to be on track to reach even the inadequate targets set out in the plan. It does not match the scale of the crisis and requires a profound jolt. And Indigenous peoples stand to be disproportionately impacted by climate events despite successfully taking care of the land since time immemorial.

B.C.’s GHG emission reduction targets do not align with climate science. The current plan aims to cut emissions by 40 per cent by 2030, which is not consistent with what the Intergovernmental Panel on Climate Change or IPCC now says is required.

B.C.’s plans to meet its emissions targets are incomplete and inadequate. CleanBC’s policies to date leave a gap of 28-44 per cent to hit the province’s insufficient 2030 target. The plan does not mention how B.C. will achieve its 2040 and 2050 targets. Further, the province is not investing nearly enough in climate programs and infrastructure to meet the urgency of the task, ensure a just transition for workers and create decent work in a new, zero-carbon economy.

Various target dates in CleanBC are far too distant and the plan relies too heavily on passive incentives. The ZEV mandate year in CleanBC, requiring that all new light-duty vehicles be zero-emission, is 2040 — far too late, and excludes trucks. The date by which all new homes and buildings must be net carbon-zero is 2032 — a decade too late. The buildings plan hinges on voluntary rebates for which the take-up rate is abysmal, while thousands of new homes each year continue to tie into gas lines.

B.C. is failing to address its forest emissions. B.C.’s forests are no longer a carbon sink. In fact, in 2018, they emitted more than three times as much CO2 as the rest of the B.C. economy. There are actions B.C. could take to reduce these emissions (and to protect B.C. communities and ecosystems), but they are absent from CleanBC.

Most significantly, CleanBC is no match for the B.C. government’s support for the fossil fuel industry, specifically gas fracking and liquefied natural gas.

In 2020 alone, B.C. provided $1.3 billion in subsidies and incentives to the oil and gas industry. Just one project, LNG Canada (Phase 1) is projected to add four to six million tonnes of GHGs per year when it is operational in 2025. The government has broken its promise to show how LNG projects are consistent with the province’s legislated targets, and it is clear that B.C. will never meet its GHG targets if this industry continues to expand.

The B.C. government is currently planning an update to CleanBC, dubbed the “Roadmap to 2030,” due to be released in October. It is good that improvements are coming, but we are not optimistic that this reset will be sufficient. 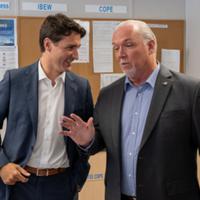 It’s Code Red for the Climate. Will BC Do Anything about It?

Other West Coast jurisdictions are taking stronger action than B.C. California is ending new fracking licenses as of 2024, and Washington state is likewise ending the practice. Washington is also aggressively tackling fossil fuel subsidies, while B.C.’s subsidies are growing. California is ending the sale of new fossil fuel vehicles (including trucks) more aggressively than is B.C.

Between the deadly weather events of this summer and the latest IPCC report, if there was ever a time to rethink B.C.’s climate plan — and the province’s misguided plans to expand fracking and LNG — this is it.

Premier Horgan, your climate plan needs a profound reboot. As British Columbians now understand, climate change is not some distant threat — it is an emergency in the here and now that is killing our neighbours and displacing entire communities. We need you to step up and lead in a manner that this crisis demands.