I’ve helped organize three old-growth protection rallies in my community over the last month. I’ve read the Old Growth Strategic Review Panel’s report (and I think you should too) and other studies about B.C. forests and biodiversity, and I’ve spent more time than I’d care to admit looking at clearcut approvals on iMapBC.

But forest policy wasn’t something I was paying close attention to until the blockades in Fairy Creek caused the issue to boil over. While I’ve long been vocal about many local and global issues, this has been my first foray into the world of forest policy.

The activation around this issue can be perceived in different ways. Viewed negatively, it lends itself to the “paid protester” trope popular to our east and south. It could also be interpreted as an indication that people don’t actually care about these issues, they just claim to because it’s “trendy.”

You could look at my public presence and say, “I thought he cared about climate. Why do these people have to be upset about everything?”

Part of the answer lies in the dynamics of social change. Fairy Creek represents what’s called a “critical juncture,” a moment that could actually produce forest policy changes that have been in the works for decades.

But the other part of the answer lies in systems — ecological and social systems that connect what may seem to be disparate issues.

Let’s start with ecological systems. It’s tempting to think about the climate crisis in terms of carbon emissions — cut emissions to zero, problem solved. That’s been the dominant narrative for years.

Unfortunately, it’s not so simple. The Intergovernmental Panel on Climate Change and the Intergovernmental Science-Policy Platform on Biodiversity and Ecosystem Services recently released a report that puts it bluntly: “The mutual reinforcing of climate change and biodiversity loss means that satisfactorily resolving either issue requires consideration of the other.”

Biodiversity and climate are two interrelated Earth systems. Damage to one does damage to the other, and vice versa. This concept is in line with a broader one developed in 2009 by a team led by Swedish professor and former head of the Stockholm Resilience Centre Johan Rockström. It’s called the “planetary boundaries framework,” and it introduces nine interconnected systems and metrics that scientists can use to estimate the bounds of the “safe operating space for humanity.” Beyond these margins, feedback loops could drive “abrupt or irreversible environmental changes.”

You’ve likely heard of some of these: ocean acidification, climate change, biosphere integrity (including biodiversity). Others are less commonly discussed like “biogeochemical flows,” a boundary threatened by humanity’s wasteful use of nitrogen and phosphorous in industrial agriculture.

According to Rockström’s team, we are currently transgressing four of these boundaries, with biodiversity and biogeochemical flows being the most threatening. As we’ve seen across B.C. the last few days, the climate has changed enough already to devastate human life, but the changes aren’t yet irreversible.

The old-growth forests in what we now call B.C. — trees far older than this province or country — are some of the most biodiverse ecosystems in the world. The massive trees sequester similarly massive amounts of carbon, support thriving networks of organisms from fungi, microbes and plants to vertebrates; and are fire-resistant, protecting the ecosystems under their charge — and the carbon they contain.

They also play a critical role in larger systems that Indigenous people have been aware of and participated in since time immemorial. Salmon consume ocean nutrients, turning them into biomass that they carry up rivers and streams to leave behind when they spawn. Eagles, bears and other predators spread their carcasses around the forest, feeding inland forests with nutrients brought from the ocean by salmon.

But Fairy Creek and other hot button environmental issues are bridged by social systems and cultural constructs, too. In a recent interview, Garry Merkel, one of the co-authors of the strategic review panel report, said “Our paradigm in British Columbia is that we see the forest as a huge bank of unending resources.”

He was speaking specifically about forest management, but the paradigm he describes — one he believes we need to leave behind — extends beyond one issue. The very premise of western civilization, and modern-day capitalism, is that the natural world exists for no purpose other than value extraction.

That idea is rooted in a mental separation between man and nature that doesn’t really exist. Humans are part of the Earth system. Our social systems, our governance structures, our technology are all parts of the Earth in the same way that the mycorrhizal communication networks between the trees of old-growth forests are. Elon Musk and Jeff Bezos may dream of becoming space lords, but the rest of us are here, very much embedded within the way the world works.

Forest management in B.C. — management with a primary goal of “sustainable” wealth extraction — is just one manifestation of this cultural construct. But virtually everything is rooted in this separation, even the way we try to “protect” landscapes today.

Merkel pointed this out in another discussion with the Narwhal. Indigenous land management practices, rooted in his culture, do not involve setting areas aside the way western governments do today, he said. They involve managing land in ways that simultaneously and synergistically prioritize both human and more-than-human outcomes by asking questions about how all life can thrive, rather than assuming an inherent distinction and conflict between humans and all other beings.

This same paradigm drives today’s less obviously ecological crises, too. At its foundation, it combines two assumptions: that wealth accumulation is the ultimate good and that extraction from others is morally justifiable. Women, as well as Black, Brown and Indigenous people, are all othered in this global economic system built on dispossession and exploitation. 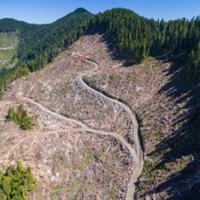 The United Nations first declared housing a human right in the 1948 Universal Declaration of Human Rights. In spite of that, the last 30 years have seen a transformative financialization and commodification of housing as global capital discovered that homes were an untapped opportunity for wealth accumulation — human rights be damned. Housing costs are rising, wealth inequality is rising, and homelessness is rising. Analogously to ecological issues, the housing market is facing its own systemic risk.

What needs to change is the paradigm that allows capital to treat housing, to borrow Merkel’s phrase, as a “huge bank of unending resources.” The poor are othered to justify accumulation at their expense. Governments fail to house people even when it’s demonstrably cheaper than leaving them homeless. All of this is done because, as with forests, salmon and the rest of the more-than-human world, recognizing their rights would expose the underlying logic of the status quo.

The mad rush to log the last remaining old growth is the latest facet in a broken paradigm that is driving humanity and Earth to the brink. It’s critical that we keep fighting for Fairy Creek, and for all the other Fairy Creeks that will crop up over the coming months.

But we also have to recognize that a paradigm shift in forest policy cannot happen without a much bigger paradigm shift in how we relate to each other and to the natural world. The hundreds of heat-induced deaths this week and the devastating destruction in Lytton are a heartbreaking preview of what’s to come if we fail to make that shift.