The Vancouver Park Board met earlier this month to discuss new bylaw amendments that allow people without homes to stay in tents overnight in parks. But the language of the amendments requires those tents be taken down at 7 a.m. the next day.

That means people sheltering in parks will be displaced every morning. Not complying will set people up for criminalization and make them especially vulnerable to policing, forcing unhoused people — a disproportionate number of whom are Indigenous — to endure additional trauma and precarity.

There was no specific language in the amendments offering tent cities any protection, though the board was careful to mention that these amendments were not meant to address Camp KT at Strathcona Park or other tent cities. This did not stop many callers, who self-identified as residents of the gentrified neighbourhoods of Strathcona, Yaletown and the West End, from providing their opinions on tent cities.

Some of the callers demonized people who use drugs, are unhoused or poor. One thread ran through all their arguments: We need our parks back.

But who do parks truly belong to, and how were they created in the first place?

A park ranger who spoke at the meeting described “a disturbing change to the forest and the inner heart of Stanley Park” as a result of people sheltering in the park, and the toll it was taking on him. “The objective really is to have all human settlement at Stanley Park removed,” he said. But the park was created as a place for people to gather, not as an isolated nature preserve. And of course, Stanley Park, made to be a pleasure zone for settlers, is a colonial construct that displaced Indigenous people.

Consider the making of Stanley Park. In the late 1800s, two Indigenous villages — X̱wáýx̱way (Whoi Whoi) and Chaythoos — existed in the place where people connected to the Canadian Pacific Railway and the burgeoning real estate market aimed to create Stanley Park. And when the park was unveiled in 1888, not just Indigenous people but many working-class Asian and European settlers were making homes there — homes demolished to construct a simulation of “pristine” wilderness.

In Inventing Stanley Park, Sean Kheraj, a professor and environmental historian at York University, details how those inhabitants were forced out and criminalized in order to create a place of respite for the largely white, affluent members of the city. This challenges the idea that Stanley Park was ever an apolitical space, or even an untouched place. Stanley Park had been used as a place to shelter in for thousands of years.

John Irwin, the only park board commissioner to vote against the amendments for a failure to consult with Indigenous and unhoused people, said hearing speakers advocate for these consultations had changed his perspective. He noted that reading about X̱wáýx̱way (Whoi Whoi) and Chaythoos had made him think more about “how in many ways our very origin was based on a version of displacement.” *

August Jack Khatsahlano, the late chief of the Squamish Nation who was born in Stanley Park, once recounted a story about being with his family and experiencing surveyors chopping down a corner of his house to build a road through the park. This action forced many of the Indigenous inhabitants onto reserves. Similarly, a Chinese family living in the park was asked to leave their home that had predated the existence of the park. When they didn’t, their home was burned down in front of them. When construction of the park road was occurring, the crew unearthed a midden — a dump site for domestic waste — and Indigenous burial sites with remains, some of which were sent to the Museum of Ottawa. The midden was not preserved, and the shells found were used to construct the road.

Up to the 1920s, the government was taking families living in the park to court in order to evict them. Kheraj notes “the records of the 1920s eviction trials show that the families were removed because they challenged the very notion of a public park by possessing private homes within it.” 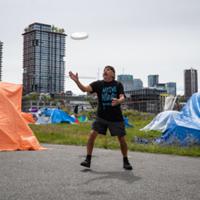 After August Jack, his family, and other Indigenous inhabitants of Stanley Park had moved to Sen̓áḵw (Kitsilano Reserve No. 6), officials decided they wanted that land back because it was too valuable to be used by Indigenous people. The village of Sen̓áḵw was decimated: its occupants kicked off by police onto barges and their houses and sheds burned down. That land now holds, among other things, Vanier Park, with the Squamish Nation only being returned a fraction of it.

The displacement of people from parks forms part of a wider history of policing space in the colonial city. It’s also important to consider the spaces surrounding Oppenheimer Park, Crab Park and Strathcona Park to really understand that displacement of Indigenous, working class and racialized people has been a part of the City of Vancouver’s modus operandi for a long time.

When the Second World War occurred, the collective anti-Asian racism of white settlers painted the Japanese settlers of the Oppenheimer area, along Powell Street, as dangerous, leading to their being forced into internment camps. While they were interned, their houses, businesses, fishing boats and property were seized and most sold off to white settlers. After the war, they were not allowed to resettle what once was Japantown and most were given a choice of moving to Japan or somewhere else in Canada, displacing them permanently out of Powell Street. 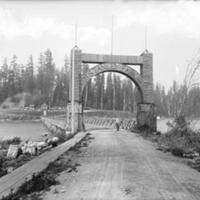 An Unnatural History of Stanley Park

The Hogan’s Alley Society has been putting out resources on the Black history of Strathcona, revealing the policies of housing discrimination based on race imposed in order to get Black Vancouverites to leave. Declaring it a “slum” allowed the city to stop city services and upkeep of any infrastructure and justify their displacement efforts under the guise of revitalization. The preparation for the construction of the Georgia Viaduct included razing many houses and, in addition to forcing Black Vancouverites to go elsewhere, did the same to many of the Chinese and other working class settlers living in Strathcona.

City officials never consulted with Indigenous peoples before forcing them off their own land, they never consulted with Japanese Canadians before interning them. They didn’t consult with the people whose homes they burned down in order to create parks, nor with the Chinese, Black or working class population of Strathcona before razing their communities. Today, they’re not consulting with the people sheltering in parks.

After 10 hours of public discussion both for and against the bylaw, the Park Board decided to pass the bylaw amendments that will enforce daily evictions and continue the cycle of displacement.

Once again, and as seen through history, it has become clear whose voices are prioritized in this city.

* Story updated on July 28, 2020 at 11:25 a.m. to clarify that John Irwin was not the only commissioner to vote against the amendments, but that he was the only one to do so for the specific reason of failing to consult with Indigenous and unhoused people.