Halfway through the 2019 election campaign, it’s turned into the trailer for the 2020 U.S. election: a series of “gotcha” shockers that, in most cases, distract from the issues we should be debating.

Justin Trudeau’s record in office pales in comparison to his time in blackface and brownface. The scandal certainly dramatizes how entrenched racism is in this country. And it is a painful reminder to many Canadians that even their prime minister has engaged in racist actions that mock them for the colour of their skin. But the political emphasis on Trudeau’s failure has been aimed at inflicting damage on him, and in doing that has failed to oblige the rest of us to consider our role and the systemic change needed to solve our racism problem.

Andrew Scheer, meanwhile, isn’t quite the insurance broker he’s been made out to be. And now we learn he’s a dual citizen, divesting himself of his American citizenship much too slowly after hypocritically complaining about former Governor General Michaëlle Jean’s dual Franco-Canadian citizenship.

Padding one’s resume and hypocrisy are no doubt deplorable personal traits. But what’s wrong with dedicating one’s life to politics rather than any other profession? And why is dual citizenship even an issue in a nation of immigrants with a big worldwide diaspora?

Jagmeet Singh gets compliments for his civil response to a stupid comment about his turban, while his predecessor Tom Mulcair says Singh has “completely abandoned” Mulcair’s defence of religious rights in Quebec — a casual sabotage of Singh rather than an argument about those rights.

Meanwhile Maxime Bernier’s take on climate is that it threatens a “green fascist dictatorship,” and Green Party leader Elizabeth May expresses her dismay over Trudeau’s two-plane campaign while saying she’s “not aware” of Green candidates who may be anti-abortion.

Psychologists would see all these as examples of displacement activity, when anxious animals do something oddly inappropriate instead of dealing with whatever is making them anxious. Canadians have a lot to make them anxious in this campaign, but the issues are a hell of a lot more important than Trudeau’s aircraft habits or Scheer’s hypocritical silence about his dual citizenship.

Former PM Kim Campbell famously said that an election campaign doesn’t offer enough time to discuss serious issues. But it’s enough time to raise those issues, which the parties could then commit to addressing after the election.

With issues like the climate crisis and systemic racism, we need to move beyond the pettier personal jabs. If your house is on fire, you don’t complain to the firefighters about their trucks’ carbon emissions.

Yet rather than debate the issues we will have to deal with for the rest of the century — climate, Indigenous people’s rights, inequality, immigration, and a host of others — the campaign has rapidly degenerated along Trumpian lines.

Donald Trump got to be president of the U.S. more by personal attacks on his adversaries than by offering any positive policies. He’s now attacking on a breathtaking scale, publicly urging Ukraine and China to investigate Joe Biden while blasting the media that accurately report on what he’s doing.

Trump has so far got away with attacking his enemies rather than defending himself, and the lesson has not been lost on the world — least of all on Canadian politicians. Smearing your opponents has always been popular, and politicians who try to run “positive” campaigns tend to end up in opposition if not out of office altogether. (The winners then shake their heads sadly about the cynicism of the voters these days.)

Now campaigners are going all out on beating up one another’s leaders and candidates, looking for someone, anyone, with bad table manners and a tendency to say rude things on Twitter in 2013. 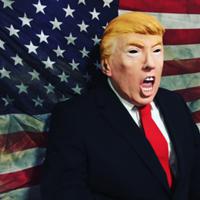 Trump Will Be Gone Some Day. Trumpism Won’t

It’s said that as the Turks were coming over the walls of Constantinople one night in 1453, many of the residents were squabbling in the marketplaces about obscure points of theology instead of repelling the invaders. By morning their disputes were irrelevant, and so were they.

By the same token, Canadian voters must realize that an election is about policies, not personalities. Our displacement activity shows we do understand what the issues are, and how addressing them will change our way of life forever: no more big weddings in Puerto Vallarta, not so many steaks and burgers on the barbecue, a whole lot fewer jobs in the oil patch, and a whole lot of new taxes. The future for all of us is going to be highly inconvenient and very expensive. Elections should be about how best to control the damage.

The race to the political gutter will continue unless the voters tell the politicians to get back to business. In the meantime, the chief question for Canadians and Americans alike is who can best steer us through the worst whitewater in history, and get us safely out the other side.