Congratulations if you’ve mostly skipped the flood of news reports on the legislature scandal.

It’s been entertaining, if you’re the kind of person who stops to look at car crashes. But despite all the noise, we know very little.

Here’s the Quick Notes version, and six things you need to know in order to understand what’s happening.

To start with, the facts. On Nov. 19, Speaker Darryl Plecas called a meeting with the three house leaders — Liberal Mary Polak, New Democrat Mike Farnworth and Green Sonia Furstenau. He told them the RCMP were investigating possible wrongdoing by Clerk Craig James, who is effectively the CEO of the $80-million legislative apparatus, and Sergeant-at-Arms Gary Lenz, the chief of security. Two special prosecutors had been appointed on Oct. 1, he said.

The three house leaders agreed the two should be suspended. Which is sensible. People in roles central to the democratic process can’t stay in their jobs while under RCMP investigation.

The next day, MLAs voted unanimously to suspend the pair, and they were escorted from the building by police.

James and Lenz say they have done nothing wrong.

And that’s really all we know. And all we are likely to know for a long time, given the creeping pace of investigations into allegations of white-collar crime.

So why so much coverage?

First, the political stakes are high. Plecas, then the Liberal MLA for Abbotsford South, took the Speaker role after the 2017 election, against the party’s wishes. They then booted him from the caucus. The seat count after the election was Liberals 43, NDP 41 and Greens three. If Plecas hadn’t broken ranks, the Greens or NDP would have had to supply a Speaker. They could still govern, but the Speaker — nominally impartial and only voting to break a tie — would have had to cast every confidence vote with the government side. Workable, but not ideal.

So if Plecas can be discredited, maybe even forced to resign, the Liberals have a chance to make life in the legislature tougher for the NDP. (And if they can win the Nanaimo byelection to replace New Democrat Leonard Krog in the new year, and oust Plecas, they could defeat the government. That’s a long shot, but not impossible. The Liberals have a credible candidate in high-profile business owner Tony Harris.)

And the Liberals are generally interested in promoting any line that suggests problems under the NDP. So they are more focused on Plecas than the implications of a criminal investigation of the two most senior legislative managers.

Second, personalities are a big part of the story. James has worked at the legislature for 41 years, and seemed competent, friendly and unassuming. People liked him and Lenz. Times Colonist columnist Les Leyne acknowledged he was “pretty compromised when it comes to passing rigorously impartial judgments on the surreal developments” around their suspensions.

And the Liberals loathe Plecas. Not just because he took the Speaker post over the party’s objections, although Rich Coleman called that a “betrayal.”

After the Liberals’ failed attempts to cling to power, the party brass tried to make a show of unity. After a caucus meeting in Penticton on July 27, 2017, Leader Christy Clark said every MLA had urged her to stay as leader, but she had decided to resign.

But that wasn’t true, Plecas told the Abbotsford News. In the meeting, he told Clark she had to go, and threatened to quit the Liberals and sit as an Independent, Plecas said.

Honest. But a lack of loyalty and embarrassing the party are the two unforgivable sins in our current politics. (Ironically the Liberals, who argued — falsely — that proportional representation would see MLAs appointed by party insiders, picked Plecas as a candidate, leading to the resignation of the riding executive in protest.)

Third, the Liberals have messed up. Polak, the house leader, had the chance to ask questions about the investigation when she met with Plecas, Furstenau and Farnworth. And the next day every Liberal MLA voted to suspend James and Lenz.

Now the Liberals appear to regret their decision. Leader Andrew Wilkinson wrote a mystifying Vancouver Sun op-ed column calling for an external review of something, though it’s unclear what.

Fourth, there is every reason to be concerned about the legislature’s financial management, based on the bleak record. Former Speaker Linda Reid’s lavish spending brought criticism. After the media revealed she had billed taxpayers for her husband’s travel to a meeting in South Africa, Reid repaid the money.

In 2007, the province’s auditor general reported the legislature’s finances were a mess. Five years later, they were still a mess, an audit found, because nothing had been done to address the original report.

Which shows arrogance, a lack of accountability and no regard for the public’s money.

Perhaps shown most spectacularly by the consulting contract handed to George MacMinn, the former clerk. MacMinn retired in 2011 at 81. James had been his deputy for 24 years. Yet somehow the MLAs on the Legislative Assembly Management Committee, meeting in secret, decided to approve a two-year consulting contract for MacMinn, at about $240,000 a year. James said he rarely consulted MacMinn, and no one could offer any idea what he actually did for the money. All very clubby.

Plecas said last week that an audit of the legislature’s budget would reveal things that would make the public “throw up.” If it didn’t, he’d resign as speaker, he promised. And based on the record, he’s likely right. 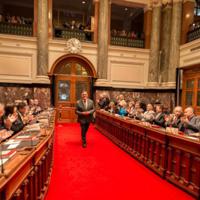 Fifth, that comment illustrated a weakness of Plecas. It came in a combative Legislative Assembly Management Committee meeting, as the BC Liberals tried to shift the focus from the RCMP investigation to Plecas and his special advisor Alan Mullen, raising doubts about their competence and the process that led to the RCMP investigation. A wise response would have been a calm reminder of the importance of not interfering with the RCMP investigation. Instead, Plecas lashed out, defending his record, promising damaging information and playing a big role in turning the first hour of the meeting into a spectacle.

And sixth, Plecas does have reason to be irked at his treatment. Two senior legislative managers are under RCMP investigation. Their suspensions were supported by every MLA. Yet the Liberals, and much of the media reporting, have focused on Plecas. Critics have noted Mullen, who Plecas hired as a special advisor at $75,000 a year, was a long-time friend. But that’s hardly unusual when MLAs hire staff. The last Speaker, Liberal Linda Reid, not only hired her campaign manager as an assistant, but allowed her to bill $16,000 in travel expenses so she wouldn’t have to move from Richmond.

Plecas was also fiercely criticized for having police escort James and Lenz from the building. It could have been handled better — most obviously just by telling them not to come in that day. But once there, they needed to be escorted directly from the building, either by police or legislature security staff who work for Lenz. Neither are great options.

There you have it. What we know about the scandal, which is not much, and the context for the wild events.