In case anyone needed a refresher on the moral rot associated with fossil fuels, this has been a hell of a month. Washington Post columnist and Saudi citizen Jamal Khashoggi, a vocal critic of the reigning oil oligarchy of Saudi Arabia, was disappeared in the Saudi embassy in Turkey on Oct. 2, possibly with the help of a bone saw.

This gruesome murder was followed by a series of laughably implausible statements about what happened by a regime apparently accustomed to saying and doing whatever they want, confident that the rest of the world is so beholden to their oil they will likely do little. In this one aspect the Saudis are completely correct.

The House of Saud is almost singlehandedly responsible for the largest famine in the world, perpetrated by blockade on the neighbouring country of Yemen. Meanwhile the U.S. and Canada have been arming Saudi Arabia for years now, and Prime Minister Justin Trudeau has egregiously referred to Canadian-built heavy assault vehicles equipped with 105-millimetre cannons as “jeeps.”

Former prime minister Stephen Harper personally assured the Saudi king that Canada would keep the details of the $15-billion arms deal secret, a capitulation continued by the Trudeau government, which has so far ignored calls to cancel the sale so obviously at odds with core Canadian values. Fourteen million people now face starvation in Yemen as Canada and the global community continue to politely tolerate the heinous adventures of the largest supplier of oil.

Much has also been made of the alleged reforms of Crown Prince Mohammad bin Salman, such as allowing women to drive cars in the 21st century. Less well publicized is the subsequent arrest of many women activists in the kingdom, some of whom may face the death penalty by public beheading, as one does in a civilized society.

Meanwhile the corrupting influence of petroleum is on wretched display elsewhere in the world. Venezuela is endowed with the largest proven oil reserves and unsurprisingly is ranked as one of most corrupt nations on Earth. Many in the impoverished population have been driven to eating their pets or even zoo animals. Up to four million people, or about 10 per cent of the population, have been forced to flee a collapsing economy and inflation rates of nearly 100 per cent per month.

Russia has the largest reserves of natural gas in the world and, in spite of President Vladimir Putin’s aspirations to global greatness, his nation is ranked by Transparency International as only marginally less corrupt than Haiti. Russian fossil fuel revenues have funded a storied ecosystem of billionaire oligarchs and organized crime whose most pressing apparent problem is laundering their money into Western banks so it can be enjoyed elsewhere.

Here in Canada oil continues to impair our collective ability to respond in a principled way to the largest threat facing the planet. The most recent report from the Intergovernmental Panel on Climate Change assured anyone brave enough to read it that we have about 12 years to drastically decarbonize our economy before most of the horsemen of the apocalypse saddle up for a little ride.

Apparently three election cycles away from Armageddon is still far too far into the future to engage our political machinery. In fact Conservative parties throughout the nation have seized on the strategy of actively fighting climate action as the best way to achieve power. Even formerly principled leaders such as Alberta Premier Rachel Notley now genuflect before the oil industry, fighting a pitched battle on its behalf to export unprocessed Canadian resources, often no further offshore than price-gouging refineries in Puget Sound.

One of the reasons it is so difficult to trigger political change on carbon reduction is the vast amount of dark money spent by the fossil fuel industry to undermine the credibility of climate science. This has been both an odious and effective investment with only 45 per cent of Americans in 2015 believing climate change is a very serious problem.

It is undeniable that cheap, abundant energy has lifted vast numbers of people out of poverty and contributed to a lifestyle of agency and affluence unimaginable in the recent past. However, these hard-won gains are soon to be swept aside by the impacts of mounting levels of carbon in the atmosphere. Climate refugees are already pouring into many parts of the world and a credible case can be made that climate change contributed to the civil war in Syria.

Having the dominant source of energy in the form of a finite resource largely held in private hands is a recipe for ongoing corruption, war and inaction on climate. While a rapid move towards renewables is already underway, this is largely propelled by the profit motive and disruptive technologies. Where is the bold action from democratic institutions? 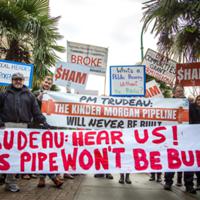 If anything, governments throughout the world remain part of the problem rather than the solution, contributing over $5 trillion in subsidies to the fossil fuel sector, the equivalent of 6.5 per cent of global GDP. Here in Canada, $3.3 billion of your tax dollars are shelled out to oil and gas companies every year – the highest economic proportion within the G7. This generous largess also does not count the $4.5 billion in public money recently splurged on the Trans Mountain Pipeline or the additional $7 billion to complete the planned upgrade.

Ottawa’s much touted carbon pricing scheme is a long overdue step in the right direction but will initially collect less money from polluters than the public giveaways flowing in the opposite direction.

The tide is beginning to turn. A recent report shows that renewable energy has now pulled even with the economic might of fossil fuels, accounting for $4 trillion in global trade. In addition to not undermining life itself, a future based on distributed renewable energy enjoys many other positives, such as not producing murderous regimes or contributing to famines.

Powerful vested interests will fight this transition tooth and nail. Elected leaders will look to public opinion on whether or not to act. Our future and our morality hang in the balance.