Prime Minister Stephen Harper is right about the Syrian refugee crisis, for all the wrong reasons. His government is being battered by outrage over Canada's wretched response to this humanitarian emergency. Our country of once-proud humanitarian leadership has so far admitted a mere 622 government-sponsored refugees when in past crises we admitted tens of thousands and were a better nation for it. 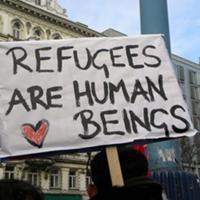 The Refugees: Canada's Opportunity of the Century

However, Harper correctly observed that no amount of charity and shelter would solve this dire situation. People are being displaced from their homes in the millions, and many more are on the way. His solution is more bombing of ISIS militants by CF-18s. In Harper's simplistic worldview, what the people of Syria really need is more explosives from the sky.

Yet a recent study from the University of California reveals another plausible scenario for why Syria has become so dangerously destabilized, with troubling implications for Canada. Researchers looked at the role that climate change played in the Syrian civil war and concluded that an unprecedented drought in the Fertile Crescent forced 1.5 million rural farmers off their land and into the crowded suburbs of Syria's already overcrowded cities, exacerbating unrest in the region.

This was occurring just as millions more were arriving from war-torn Iraq, fleeing the disastrous decade-long conflict sponsored by the U.S. (and enthusiastically supported by Harper when he was in opposition). Obviously climate change is not the only factor contributing to the crisis, but the authors believe their data supports the grim conclusion that our warming world will see many more families forced from their countries and homes in the future.

"We're not saying the drought caused the war," said Dr. Richard Seager, a climate scientist at Columbia University's Lamont-Doherty Earth Observatory who co-authored the study. "We're saying that added to all the other stressors, it helped kick things over the threshold into open conflict. And a drought of that severity was made much more likely by the ongoing human-driven drying of that region."

The Middle East drought between 2006 and 2011 was without precedent since modern record keeping, killing over 80 per cent of livestock and driving up local food prices. Already poor populations had to contend with higher temperatures that dried soil and failed rains during the normally wet season due to weaker winds from the Mediterranean.

Things in the volatile region are not getting better. 2015 has been by far the hottest year on record, and this summer saw scorching temperatures of up to 48 C from Israel to Iran, straining both water and electrical systems in the region. In Syria, where residents have also been contending with four years of raging civil war, such relative luxuries like running water and air conditioning would be a distant memory for many desperate families internally displaced.

The wave of refugees now streaming out of Syria is a small taste of our climate-altered future and has been a leading concern of many military experts. In a report to Congress last July, the Pentagon specifically flagged climate change as a destabilizing factor in Syria:

"From 2006-2011, a severe multi-year drought affected Syria and contributed to massive agriculture failures and population displacements. Large movements of rural dwellers to city centers coincided with the presence of large numbers of Iraqi refugees in Syrian cities, effectively overwhelming institutional capacity to respond constructively to the changing service demands. These kinds of impacts in regions around the world could necessitate greater Department of Defense involvement in the provision of humanitarian assistance and other aid."

Thousands more migrants are pouring out of North Africa, another area devastated by climate change. Twenty-five million people depend on the water in Lake Chad, which has shrunk by 95 per cent since 1960. Rainfall in Algeria is projected to drop by up to 20 per cent in the next 10 years. Up to 250 million people in Africa are expected to suffer food and water shortages this century due to climate change.

The geopolitical implications are dire -- when people can't feed their families, governments fail. The Arab Spring that started in Tunisia in 2011 was directly related to rising global and local food prices. The top nine wheat-importing nations per capita are all in the Middle East. Opportunistic extremist groups like ISIS unsurprisingly fill the power vacuum created in Libya and elsewhere by these climate-related factors.

The sad result is thousands being driven to desperation and filling overloaded boats for a better life in Europe or elsewhere. The media and politicians have focused on such photo-driven narratives, or the televised torture of ISIS propaganda -- obligingly rebroadcast by the Conservative Party of Canada in its attack ads.

A key long-term driver of this unfolding humanitarian catastrophe is climate related. And on that front, Canada's record of contributing to this crisis is far more significant than our wretched record so far in resettling Syrian refugees.

While our carbon emissions globally are only two per cent of the world's total, the Harper government has been instrumental in delaying meaningful international action. The moral burden we as Canadians all bear for losing this critical window to act will come into clearer focus with every passing year and each wave of desperate climate migrants.

I suspect that in the coming decades Harper may go down in infamy as one of history's worst climate villains. His government used the hard-won stature of our country to effectively block international consensus at the very moment when the world might have avoided years of human misery like we have recently seen on horrible display.

Harper is correct that resettling refugees alone will not solve this crisis. However, his government is grotesquely guilty of contributing to a key cause.