Last night Vancouver city council made a historic change to legalize duplexes in almost all neighbourhoods in the city. It was the latest development in the city’s implementation of its Making Room action plan, which will allow for moderate density across Vancouver.

The hearing was contentious, confusing and controversial. There has been an abundance of fear and scarcity of evidence. With duplexes now legal in most neighbourhoods, it’s past time to look at the experience of a neighbourhood that has done this already, east Vancouver’s Norquay – my neighbourhood.

If you don’t know where Norquay is, you aren’t alone. It really wasn’t a place until the city was looking for a name for planning work it was doing along a stretch of Kingsway centered on the old Eldorado Hotel. Fast forward a few years and this pocket of East Vancouver – just south of the Nanaimo and 29th Avenue Stations – has much to tell us about what is in store for our city.

It took me a few months after moving into the neighbourhood to even clue in that there was something different about it. It was a quiet neighbourhood mostly lined with Vancouver Specials, occasionally punctuated by a rebuild. Both sides of the street seemed cut from the same cloth – no frills East Van. I had no notion that the houses across the street had different zoning than the one I rent in.

It is only because I’m an urban geographer that obsessively researches all things zoning that I learned the reality. It turned out that my side of the street was different. In fact, my whole neighbourhood was different. I was living inside one of the most important planning experiments for contemporary Vancouver.

My part of Norquay was rezoned from single-family zoning to duplex zoning (RT-11 to be exact) in 2012. Other parts were zoned for town and rowhouses (RM-7). Later in 2016, blocks just off Kingsway were rezoned to allow four-floor apartments. These 1,911 upzoned lots can tell Vancouver a lot about what to expect from duplex zoning and further proposals from Making Room.

No magnet for speculators

In the public hearing and the lead up, many fears were expressed. A speculative land rush! Developers flooding into neighbourhoods! A “chainsaw massacre” of our built form! Mass renter displacement! All of these fears make sense, but do they hold up to actual evidence?

The Norquay experiment says no.

The neighbourhood hasn’t been torn down in a speculative rush. In six years, only a single property on my block has been rebuilt as a duplex. The most I’ve seen is five duplexes on a single block. Several blocks haven’t seen any redevelopment at all. There have been 60 duplexes built in all. 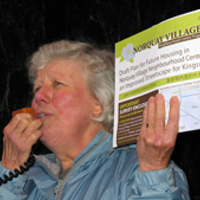 Preliminary data indicates that single detached homes with duplex zoning are, if anything, selling at a slight discount compared to non-rezoned properties (about six per cent cheaper). Single detached properties with townhouse zoning are selling at an estimated 13 per cent premium compared to non-rezoned properties. It is only houses rezoned for four floor apartments that see a big jump in values (about 37 per cent higher sale prices) and notable development.

At the height of flipping in 2017, Norquay had almost no flipping. Few properties got sold at above their assessed values. What our area has is certainty. There are no surprises. Areas for land assembly are planned and transparent. Areas for gentle density are a gradual, near-invisible shift to duplexes and townhomes.

As the city puts forward more proposals for Making Room, the first stop should be this odd bit of East Vancouver. Planners and citizens alike need to come and learn from a neighbourhood that has done it already. Let’s make room for evidence.