Full disclosure: I’ve lived in Deep Cove for 50 years and often walk my dog in Cates Park on Burrard Inlet, just a few hundred metres from where Kinder Morgan is building new facilities to ship diluted bitumen to foreign markets. Lately, Kinder Morgan’s pile driver has been making a lot of noise.

Back in the 1940s when writer Malcolm Lowry lived among the squatters on this shoreline, he used to go swimming in the inlet and contemplate the oil refinery across the water. Even in Lowry’s day, this body of water was the industrial harbour of an industrial city.

We have a long history of air and water pollution. Every autumn we used to endure the smoke from loggers’ slash burning. Deep Cove was often off limits for swimming because of high fecal coliform counts. But environmentalism scarcely existed, and every year the Vancouver Sun Salmon Derby inspired thousands to go out on the saltchuck to catch the biggest fish in what seemed like an infinite supply.

Live and learn: the Exxon Valdez taught us what can happen to a big oil tanker with the wrong captain. Wild salmon started getting scarce. People began to worry about something called global warming, caused by our energetic pumping of carbon dioxide and methane into the atmosphere. Decades later, we think we get it.

A shame to waste all that fentanyl

Except that some of us don’t. Canada is like a guy who knows he needs to quit smoking but he’s got a couple of cartons of cigarettes stashed at home in a closet and he doesn’t want to waste them. As Justin Trudeau said in a speech in Houston, Texas, in 2017,  “No country would find 173 billion barrels of oil in the ground and just leave them there.”

Or 173 kilos of fentanyl. Sure, selling that stuff would kill a lot of people, but you’d live well while it lasted. When it was finally gone, you could afford to pay for a really good detox program somewhere.

Yes, Trudeau spent time here as a boy, enjoying summers with his mothers’ parents, the Sinclairs. He worked here as a teacher. But he’s missed or ignored both the immediate and the long-term problems with Kinder Morgan.

The immediate problem with the Kinder Morgan expansion is the threat to where we live — not just to us, but also to fish, shellfish, whales, birds and the whole ecosystem they sustain. And to the economy that depends on that ecosystem. Tourism is a big deal here. In B.C., the tourism market generated $15.7 billion in revenue in 2015. But after a major spill we would have nothing but disaster tourists, a few gawkers flying in to take selfies with an oily beach in the background. Of course, the cleanup workers would… clean up.

The long-term problem is that it doesn’t matter whether carbon dioxide emissions happen here or in central China. Greenhouse gases will heat the planet while the poor, low-emissions nations will suffer far more than the big industrial nations like Canada. Our problem will be keeping too many climate refugees from poor countries out of the country.

Even now, big tankers leave the Kinder Morgan facilities and cruise under the bridges to overseas markets. They are huge and ride low in the water. The tankers and the systems that guide them are very high-technology. After the expansion, seven tankers will sail where one is sailing now. We are asked to trust the promises of those who will profit that it will all go just fine. The tanker crews will always be trained, sober, undrugged, and dedicated to their task. Their ships’ software will be reliable and unhackable. 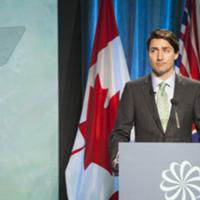 The Oil Party Is Over, Trudeau — Even Canada’s Energy Firms Know It

We are also asked to trust that someone will actually want to buy the crap we’re pumping out of Alberta — and at a price that makes it worthwhile. Fracking has already put the U.S. ahead of Saudi Arabia as the world’s greatest fossil fuel producer. The Saudis themselves are shifting to solar power. China is investing in fracking its own shale deposits as well as expanding solar power. With cheaper, cleaner fossil and solar energy available, who’d want to buy Alberta sludge?

The wisdom of Ian Tyson

Cultures are strong and stubborn, and Alberta’s culture has always held that wealth comes out of shipping stuff somewhere else: beef, wheat, canola, coal, oil, whatever. B.C. has grown a little beyond that garage-sale culture, if only because we’ve thrown away our wild salmon and the pine beetle has consumed our forests. For the time being, we’re trying to live on our real estate, but eventually we’ll have to live by our wits and what’s left of our good looks.

Albertans may sulk and pout and ban B.C. wines, but eventually they’ll face the reality that they’re in the same boat. It will probably take the defeat of the Notley NDP government, and then a couple of desperate Jason Kenney governments. But eventually Albertans will realize that, as Ian Tyson once observed, “Our good times are all gone, and I’m bound for movin’ on.”

Both we and Alberta had better realize that our good times aren’t coming back, and we can’t move on anywhere else. We’re stuck here, a few million people in a lucky corner of a very unlucky planet. We’ll live by our wits, or die by our stupidity.