After several days of reports on refugees crossing the border into Manitoba and Quebec (at the risk of frostbitten fingers and toes), the Angus Reid Institute has released a survey showing that about a quarter of Canadians think we need a Trump-style ban on Syrian refugees. Two out of five of us think we’re taking in too many as it is. And just 11 per cent of us think we should admit more.

It’s always useful to know the state of public opinion. But refugees, like climate change, are not a matter of opinion. Both are coming, whether we approve or not. The real question, in both cases, is what we’re going to do about them.

After a promising start, Europe has slammed the door on refugees, leaving them in overcrowded reception camps in Greece and Italy. We Canadians don’t look so great ourselves, because we’ve failed to live up to our refugee ancestors.

The United Empire Loyalists were refugees. So were the Irish fleeing the potato famine of the 1840s and the Black people escaping slavery in the American South. The Doukhobors were Russian refugees, their escape paid for by Leo Tolstoy’s book royalties.

We turned away the Jewish refugees on the St. Louis (“None is too many,” Ottawa decided). But we did welcome the Hungarians in 1956 as well as the Vietnamese and the Ugandan Ismailis in the 1970s. No one worried about Communist spies and terrorists slipping into the country among them.

A nation of refugees

Canada is arguably a nation not just of immigrants, but of refugees — tough and brave and lucky enough to make it here and build a far better country than the ones that had rejected them. Some of their ignorant descendants now want to raise the drawbridge against newcomers whom our ancestors would have embraced at first glance.

But we really have no more choice in the matter than the First Nations had in our own arrival.

According to the U.N. High Commissioner for Refugees, over 65 million people worldwide have been forcibly displaced — the equivalent of almost two Canadas. More than 21 million are refugees, half of them from just three countries: Somalia, Afghanistan, and Syria. And more than half of those 21 million are under the age of 18.

Justin Trudeau got worldwide praise for accepting 25,000 Syrians; Turkey hosts 2.5 million — 100 times more. After the U.S. got through punishing Afghanistan, Pakistan took 1.6 million Afghan refugees and Iran took close to a million. Jordan somehow supports over half a million Syrians and Palestinians.

So we don’t have much bragging room in this ongoing disaster. Whether we like it or not, we’re in the midst of the greatest displacement of people in human history, and it will only get worse. Climate change is making vast stretches of Africa and the Middle East uninhabitable, fit only for warlords to fight over. Climate-driven wars, droughts, and floods will force still more from the tropics to the temperate zones.

Not all will die on Libyan beaches. Some will make it to Mexico, or the U.S., and then to the Canadian border. Millions, already living in the U.S., will head north — spurred by new deportation rules now being developed by the U.S. Department of Homeland Security.

We can also expect plenty of native-born Americans following the Vietnam war resisters of the 1960s, not to mention expatriate Canadians running for home while the running is good.

So we’re past the point where we can pick and choose our refugees for political brownie points. And if we adopted a Trumpian ban on refugees altogether, we’d hate ourselves in the morning — as we did after the Komagata Maru in 1914, and the internment of Japanese-Canadians in 1942. The challenge is not whether to accept them, but to accept their arrival as a fait accompli. Now what? 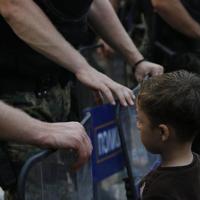 Look at refugees to Canada as a solution, and not a problem, and answers are easy:

• Pour money into provincial school systems and post-secondaries, especially for English and French language training. Most refugees are young, and half are children. Move them through the system toward jobs and careers we’ll need, and then deliver the jobs.

• Find or build housing in smaller towns and cities to shelter refugees while they learn the language and the country. The money will boost local economies and create a climate of opportunity for refugee entrepreneurs to open their own businesses. Canadians have acquired a taste for global cuisine in the past half-century, and I can’t wait to try Syrian and Somali cuisine.

• Pour more money into healthcare, especially mental health. No one is displaced without suffering severe stress, and refugees will need strong support to get through a very bad time. Once through it, they’ll give back far more than they received.

• Fast-track the professionals among the refugees. The doctors, teachers, and engineers should resume their careers as soon as possible. Many will have U.S. experience, and will settle in quickly. But all should find meaningful work.

• Use the refugees to create the infrastructure for future waves. Because they will assuredly come, like the multiple waves of a tsunami.

When decency is the only defence

I offer these ideas without a syllable of “Kumbaya” running through my head. They seem to me a bare-minimum response to an existential threat.

Admit refugees grudgingly, and exploit them as casual labour, and you’ll get what many European nations got: ghettoized suburbs where unemployed young men grow up alienated and entertain themselves by setting fire to cars. Or they go abroad to join the latest jihad instead of getting home to their families to enjoy an evening of TV and helping the kids with their homework. 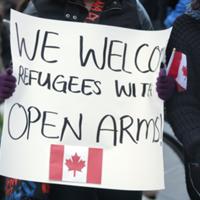 In Face of Trump, Let Canada Stand for Refugee Inclusion

The European nations — every last damn one of them full of citizens with recent refugee ancestors — have disgraced themselves in the past two or three years. The U.S. is now mocking the welcome on the Statue of Liberty:

“Give me your tired, your poor,
Your huddled masses yearning to breathe free,
The wretched refuse of your teeming shore.
Send these, the homeless, tempest-tost to me,
I lift my lamp beside the golden door!”

Canada now has an opportunity to lift its own lamp, and to survive as a large, complex and sustainable nation through a very bad time.

Or we could douse the lamp, deport the frostbitten refugees who do make it here, and then try to do it again with the next wave — and the next, and the one after that. The refugees will keep coming.