Protected bike lanes are a favourite punching bag for Canada’s pundits and politicians.

Lawrence Solomon in the Financial Post recently called for Toronto to “ban the bike” in one of his three columns on the subject in the span of a month. Rob Ford made a career out of condemning the “war on the car” and ripping out bike lanes. Lorne Gunter of the Edmonton Sun accused the city government of inflating its usage statistics in favour of elite bike riders, then arbitrarily cut the number of riders in half to make the point that they were a waste.

Fortunately, while they may be entitled to their opinions, that privilege doesn’t extend to facts. Countless studies have been published over the years to test the impact of bike lanes — and the results are pretty clear.

One user group, though, is benefiting even while frequently being the most opposed to the lanes: drivers who don’t bike.

Study after study has shown the ways that drivers benefit directly or indirectly from bike lanes, and yet drivers are the most likely to disapprove of bike lanes: in Toronto, 57 per cent of drivers who don’t bike do not support the Bloor Street project.

But they should. Here’s why.

Not only do bike lanes make the roads safer for cyclists, but they also reduce crashes and near-misses between cars. In Toronto, there was a 71 per cent decrease in car/car conflicts. That’s an even bigger reduction than there was in conflicts between cars and bikes and between cars and pedestrians, both of which fell by more than half.

“The overall tenor of the street changes,” says Tom Babin, a Calgary cyclist and author of the book Frostbike: The Joy, Pain and Numbness of Winter Cycling.

“It’s a little less car-dominated, a little more human scaled. All of that improves safety for everyone using it.”

In Toronto, there is one caveat: there was a 61 per cent increase in conflicts between bikes and pedestrians, but those tend not to be as serious (a similar study in New York found pedestrian injuries actually fell by more than a fifth) — and crashes overall went down by 44 per cent.

Even accounting for the traffic that diverted to neighbouring corridors, in the Bloor Street study the city found overall traffic went down. Driving times at rush hour increased by between two and four minutes.

“If you feel there’s too much congestion on the roads, you should be supportive of bike lanes,” Babin says, pointing to a city planning phenomenon known as “induced demand” in which extra car lanes, once built, quickly fill with more cars as people adjust their commutes.

“You can’t build your way out of congestion,” he says, and the opposite is true as well. When car lanes are reduced, people find other ways to get to work, and traffic is alleviated.

After the bikes lanes were built in New York, travel time at peak hours decreased.

Canada’s socialized medical system means we all bear the costs of large-scale choices. Nudging people to be more active can save us all money.

An enormous British health study of more than a quarter million people found those who commuted by bike reduced their risk of cardiovascular disease, cancer and all other causes of death by nearly half. Cardiovascular disease and cancer alone cost the Canadian health-care system over $25 billion per year.

Another British study, this time looking at bike lanes in New York, estimated that the lanes, at a cost of more than $8 million, may have increased the probability of riding bikes by nearly 10 per cent. That’s a good deal, it concluded: “Investments in bike lanes are more cost-effective than the majority of preventive approaches used today.”

Business owners along bike lanes have often rebelled against the idea of building them in front of their stores and restaurants. In Vancouver businesses along Commercial Drive actually collected 5,000 signatures to oppose a plan to put in a bike lane along that street.

But evidence indicates that concern is misplaced. Establishments along the Bloor Street bike lane and the bike lanes in New York actually saw an increase in spending. In San Francisco, after four and a half years, two-thirds of businesses thought bike lanes had improved their sales. A Portland State University study found cyclists spend more money overall (except at grocery stores) than car-driving customers do — because they visit more frequently.

“When you’re riding a bike, especially in a dense urban area, it’s much easier to stop and pick up something on your way home,” Babin, who also runs a cycling website called Shifter, says.

The same goes for parking. An Australian study found that a parking spot used for a single car as opposed to the six bikes it could otherwise accommodate would only generate about a quarter as much revenue for nearby businesses.

In Vancouver, a 2011 report to the mayor from the West End Mayor’s Advisory Committee prominently featured criticisms of the bike lanes being built in the neighbourhood. But today, the West End Business Improvement Association boasts on its website that it is “one of Canada’s premier urban cycling destinations.”

Bike lanes can also be taken to the next level, like this glowing Van Gogh-inspired Starry Night pathway in Eindhoven in the Netherlands. But, you know, one step at a time. 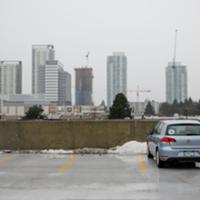 Imagining City Life After the Car

A Halifax survey found the most popular choice by far for a divider between the road and the bike lanes were planter boxes, adding visual appeal to what had formerly been just a lane of pavement.

Some respondents in that last survey opposed the project entirely based on what they saw as a lack of demand. That’s an argument that’s also rearing its head in Victoria. The first phase alone of Victoria’s downtown bike lane project (5.4 km of separated bike lanes, nearly as much as Vancouver and Calgary) will cost the city $14.5 million. That’s a lot of money to spend — but it’s also less than a fifth of the $85 million spent on the McKenzie Interchange on the highway out of town.

But will it be used, many people ask? Currently one in six Victoria residents bike to work, and that’s the highest proportion in the country.

To Babin, one of the biggest benefits of bike lanes is making biking accessible to more people.

“It gives drivers a chance to get out and ride their bikes.”