Vancouver’s byelection results Saturday should scare all parties, since even those that won city council or Vancouver School Board seats still have reason to be deeply troubled by their own performance.

But will they take heed in time for the October 2018 full city elections?

As predicted in this column last week, the right-wing Non-Partisan Association’s Hector Bremner won the single council seat — but with an extremely poor margin of victory over second place finisher Jean Swanson, an independent supported by the Coalition of Progressive Electors.

Bremner, a former B.C. Liberal provincial candidate who also worked for interim party leader Rich Coleman, mustered only 28 per cent of the vote despite a four-way split of the left-centre/environmental vote, with Swanson close behind at 21 per cent.

And only two of the NPA’s five Vancouver School Board candidates won — ex-trustee Fraser Ballantyne and newcomer Lisa Dominato — showing a distinct lack of support for a party that encouraged the then-B.C. Liberal government to fire the democratically elected board last year for not passing a budget in time.

The NPA’s pyrrhic victory should be a huge wake-up call if it wants to seriously challenge Vision Vancouver Mayor Gregor Robertson and his council majority next year.

Vision’s embarrassing fifth place council finish with young newcomer Diego Cardona, whom I supported and who garnered just 11 per cent of the vote, means a radical rethink is mandatory, though it retains a narrow majority.

The Vision strategy of putting up a very impressive but unknown 21-year-old former Colombian refugee, and appointing its candidates instead of holding a nomination vote and possibly seeing someone with name recognition like ex-VSB chair Patti Bacchus run, clearly didn’t work.

While a byelection without the council balance of power on the line was never going to draw a lot of voters or reinvigorate Vision supporters, a better known candidate with a track record of success might have made the party more competitive.

That all means Robertson’s future, and that of Vision’s five incumbent councillors, is up in the air for 2018.

Robertson appears to realize that. In a statement released election night he said: “We knew this byelection would be difficult, and last night’s results were not what we hoped for. Our city faces real challenges. Vancouverites are frustrated — particularly around housing affordability — and they expect more from us.”

Vision has to renew and rejuvenate after nine years in power if it wants to be re-elected, with Robertson needing to decide soon if he wants to try for another term, by staking out new ground on affordable housing and homelessness and bringing fresh candidates into the mix.

For the Greens, Pete Fry has become a likeable but perennial political loser, finishing third for council this time after losing in 2014 and again in a 2015 B.C. byelection. That Swanson topped Fry despite the Green machine has to hurt.

The Greens can celebrate their three VSB candidates — ex-trustee Janet Fraser and newcomers Estrellita Gonzalez and Judy Zaichkowsky — topping the polls. But with 11 per cent voter turnout versus 44 per cent in 2014’s regular election, there’s no Green wave to talk about, only a ripple.

Left-leaning party One City finally broke through to win one seat — Carrie Bercic on VSB — but its council candidate Judy Graves finished a weak fourth with just 13 per cent of the vote, clearly splitting votes with Swanson, Cardona and Fry. In a full election, it’s unclear if One City’s limited resources and voter recognition will let it survive competition with much larger parties.

Swanson’s swan song was bittersweet. Finishing second was a considerable accomplishment, but splitting the vote to let Bremner, a right-wing oil and gas lobbyist, join a city council opposed to the Kinder Morgan pipeline isn’t. 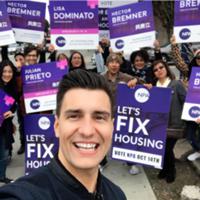 Crowded Field on Left Could Hand Wins to NPA Saturday

And COPE’s sole candidate, Diana Day for VSB trustee, came in a distant 15th for the nine seats, showing how far the hard-left party has fallen since winning a majority with former mayor Larry Campbell back in 2002.

All four left-centre/environmental parties have a big choice coming in 2018: win together or lose separately to the still eminently beatable NPA.

But ultimately the solution for better representation and less vote-splitting for all parties is as obvious as it is difficult. The provincial government should introduce a ward system for all major B.C. cities, ensuring each neighbourhood has a councillor, VSB trustee and park board commissioner while only the mayor is elected across the city.

Unless and until that happens, it’s up to non-right municipal parties to decide whether what unites them is greater than what divides them and quickly act accordingly to fashion an electoral agreement for the 2018 election.